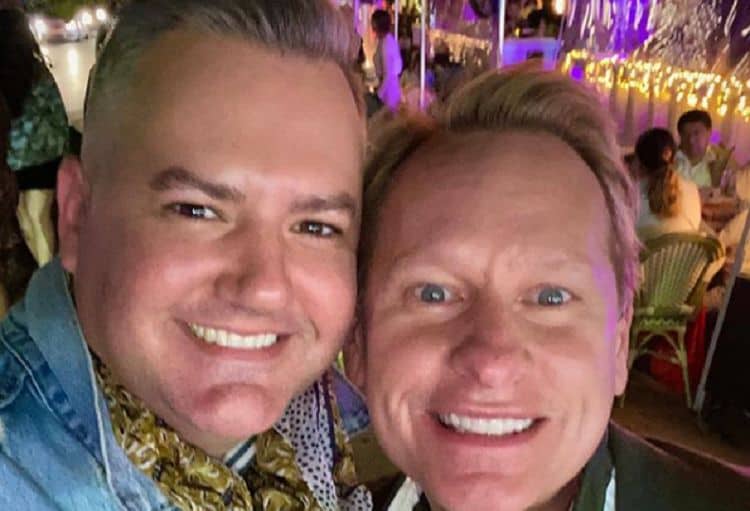 With his bigger than life personality, Ross Mathews is one of the most popular TV hosts around right now. Whether you know him from Celebrity Big Brother, Hollywood Today Live, Chelsea Lately, or RuPaul’s Drag Race, know him you undoubtedly do. Although just how well is another question entirely. Did you, for example, know that he once set up an online store selling tiles and flooring? Or that he once featured in an episode of House Hunters? For more little-known facts, keep reading,

1. It all started with “Ross the Intern”

The success of Mathews’s career can be traced all the way back to the early 2000s, and specifically, to his internship on The Tonight Show with Jay Leno. “Ross the Intern” quickly became one of the show’s most popular figures, giving him the perfect platform on which to build his future success. Since those early days, Mathews has become one of the most popular personalities on TV, appearing on everything from the Eurovision Song Contest and RuPaul’s Drag Race to Hello Ross and The Insider.

At the age of 40, Mathews has achieved more than most of us could dream of. Since taking the first steps in his career as “Ross the Intern” on The Tonight Show with Jay Leno, he’s hosted more shows than the rest of us have had hot dinners, and the results speak for themselves. According to Celebrity Net Worth, the TV personality is currently sat on the very cool worth of $2 million.

3. He starred on Days of Our Lives

While most of us know him as a TV host, Mathews has made a few unlikely career moves over the years, with one, in particular, likely to take you by surprise. Between 2008 and 2011, the popular entertainer was showing off his acting skills as a regular on Days of Our Lives. His character of Chris, Sami’s workout buddy, may not have had as many juicy storylines as the rest of the cast, but he proved mightily popular with viewers, none-the-less.

In 2013, Mathews made the transition from bubbly TV personality to serious author with the release of his first book, ‘Man Up: Tales of My Delusional Self-Conï¬dence’. The hilarious account of his funniest and most embarrassing life experiences became a must-read for any true fan, of which there were apparently enough to send him straight to the top of the bestselling lists.

5. He was voted America’s Favorite Houseguest

In 2018, Mathews made history as one of the contestants on the first-ever American edition of Celebrity Big Brother. Despite stiff competition from the likes of Omarosa Manigault, Ariadna GutiÃ©rrez, James Maslow, Shannon Elizabeth. Brandi Glanville. and Keshia Knight Pulliam, he beat everyone but Marissa Jaret Winokur to poll position (and even then, he managed to prove his popularity by winning the title of America’s Favorite Houseguest, earning an extra $25,000 on top of his second-place winnings of $50,000 as a result).

6. He supports The Human Rights Campaign

Mathews might have a big personality, but he’s got the heart to match. An all-round good egg, the TV host is a supporter of numerous worthy causes, not least The Human Rights Campaign, the biggest civil rights organization in the US dedicated to achieving lesbian, gay, bisexual, transgender and queer equality. “I take pride in using my platform to show LGBTQ kids everywhere what they can be,” he’s shared with Impacting Our Future. “I also speak at events with the Human Rights Campaign and participate in pride events all over the country. I believe that once somebody knows someone who is LGBTQ, they become more empathetic to the community. Since our presence in media is so much stronger, so many more people know us.”

In 2007, Mathews joined a host of other celebs (including Kimberley Locke, Cledus T. Judd, Tiffany, Maureen McCormick, and Dustin Diamond) as part of the fifth season of VH1’s reality TV show, Celebrity Fit Club. When the show premiered on April 22, Mathews weighed in at a hefty 214 lbs (97 kg). By the time it finished on June 10, he’d lost a staggering 41 lbs (or in other words, 19.2% of his body weight), bringing him to the fighting fit weight of just 173 lbs (78 kg). While impressive, it paled in comparison to Maureen McCormick’s weight loss: after starting at 150 lbs (68 kg), McCormick ended the series weighing just 116 lbs, a mighty 22.7% less than her starting point.

8. He owns a flooring store

Now, this is a strange one. Despite making quite literally millions as a TV host, Mathews has somehow managed to find the time to start a business. And we aren’t talking your usual celebrity clothing boutique or skincare line. Nope, the former farm boy from rural Washington is keeping his feet firmly on the ground with Swank LA, an online store selling stone, tile, and hardware at discounted prices.

9. He had a run-in with the cast of Friends

2020 sees the release of Mathews’s second book, Name Drop. In it, he recounts a red-carpet meeting with the Friends cast in which two of its members were less than friendly. “Matt LeBlanc pointed to me, then looked into the camera, and said, ‘Jay, are you kidding? Are you kidding, Jay?’” Mathews recalls in the memoir. “Matthew Perry joined in, addressing the camera and asking, ‘What’s the call here, Jay?’” Fifteen years later, Mathews finally got an apology from LeBlanc (if not from Perry) after the star approached him on the Red Carpet at the SAG Awards and said, “I don’t know if you even remember this, but years ago you interviewed me on a red carpet and I was really rude to you. It’s bugged me ever since and I’ve always wanted to apologize to you. It wasn’t cool of me to do that to you. I’m sorry.’”

At this point in his career, there can’t be many celebs Mathews hasn’t interviewed. Of those he hasn’t, there are three that would make his bucket list. “Adele, the Barefoot Contessa and Elton John,” he reeled off to Twin Cities. “That’s a cocktail hour I’d like to join.”