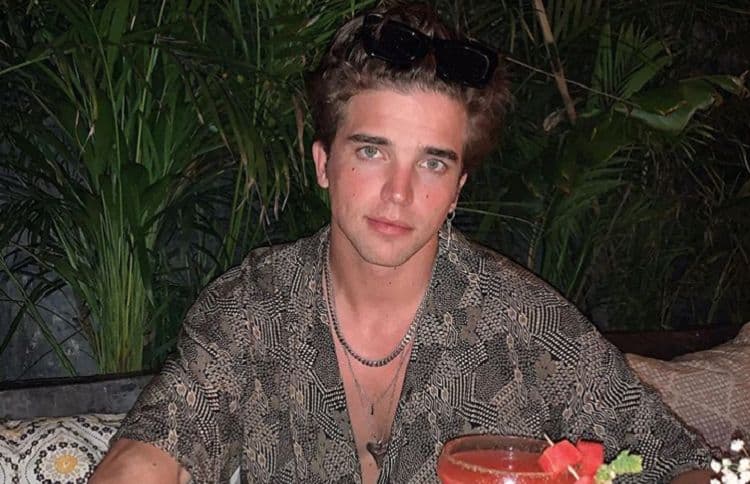 River Viiperi grew up going through magazines searching for pictures of hot girls, not knowing that one day he would be the one gracing the pages of fashion magazines. He has so far worked with reputable brands, including Calvin Klein, Versace, H&M, American Eagle, and many more. However, his sights are not focused on modeling alone because he feels he has the potential to become an actor. He is his role model because he has overcome so many challenges in life yet would not change a thing, given a chance. These ten facts will let you in on what more there is to know about the model.

1. He was once arrested for battery

River is one jealous man, and when he dated Paris Hilton, he proved he cannot share his woman, be it with a man or woman. Therefore when Paris kissed another girl, instead of River taking it up with the girl, the model punched the girl’s boyfriend, perhaps to tell him to control his woman. The victim pressed charges, and River was arrested although he was released before he could be taken to the police station.

2. He has no favorite meal

You would think that for someone who has enough money to buy whatever he wants, River would have one meal he prefers over the rest. However, he comes across as a humble man who appreciates everything he has. Therefore whatever is on the plate, he eats without complaining, viewing it as his favorite meal at the moment. River reasons that many people around the world go hungry and picking one type of food over another would be a sign of being ungrateful.

For most people, their favorite place has to do with the scenic satisfaction they get, but for River, it all comes down to who connects with him on a real level. Nowadays, with social media, getting someone who is not pretending to be something they are not is rare; the expectations of being “perfect” have risen. River, on the other hand, prefers spending time with those who do not care so much about impressing others and are comfortable with themselves. If he can get such a crowd, then the model will have found his favorite place to have fun.

4. He was praised as a man mature for his age

Paris Hilton and River dated for two years despite them having an age difference of 11 years, and Paris attributed their great love life to the fact that River was mature beyond his years. Although she admitted that men could be insecure, she recognized that River adored her in such a way that he thought that she was the most incredible woman he had ever met. As she told Perez Hilton, the model was different from all the other men she had dated.

In 2018, River posted a black and white video titled “FREE,” which had many wondering what kind of freedom he meant. In one interview, the model disclosed that for the first time in his life, he felt he was doing what he wanted. He had, for a long time, gotten used to people telling him what to do: the length of hair he should have, the social media platforms he should visit, and even the amount of time to spend in the city for him to get a job. By the end of 2017, River was tired of living by other people’s rules hence the video.

6. His mother encouraged him to try modeling

River’s mother was a model; therefore, she introduced her children to the industry when they were still young to do some baby modeling. At the time, it was for fun since River was not old enough to make an informed decision about pursuing it professionally. However, when he was 18, River’s mother floated to him the idea of becoming a professional model. His father, on the other hand, despite wanting him also to become a model, insisted that River finished his high school education first.

7. His most memorable experience as a model

They say in a world where you can be anything, choose to be kind because everyone is fighting inner battles. River does not take anything for granted and remembers that when he went to work with Versace and H&M, they treated him so kindly that it will forever be ingrained in his memory. He told Trend Hunter that from the moment he walked into the Versace building, he felt right at home because everyone was kind.

8. Why he gave back to his fans

River believes that were it not for Twitter, then he would not be where he is today since it is the only platform that was available when he started his career, and people gave him immense support. He, therefore, felt it was his duty to show his fans just how much he appreciates them by giving them a few pieces he got from Versace and H&M. Although it was his team who thought it would be a great idea to show his fans some gratitude, River felt it was a perfect gesture for all those days his fans stood in the rain and cold to see him and take a picture. Besides the gifts, River also does not mind interacting with his fans on social media.

9. His family moved a lot when he was young

While to some of us, the farthest we have ever been is to another town within one state, River can boast of being well-traveled. He was born in Ibiza, where they lived for six months before moving to Madrid. The family then relocated to the Canary Islands before moving to Finland and then back to Spain. Now, as a model, he gets to visit exotic places due to the nature of his job, and among his favorite places is Dubai.

10. He wanted to be a stockbroker

River’s father was involved in the stock market, although River does not reveal in what way, but watching his father made River want to be a stockbroker. However, now that his gear has shifted to modeling, he is interested in acting. He has another plan because he told The Fashionisto if all else fails, then studying public relations is still in the cards.