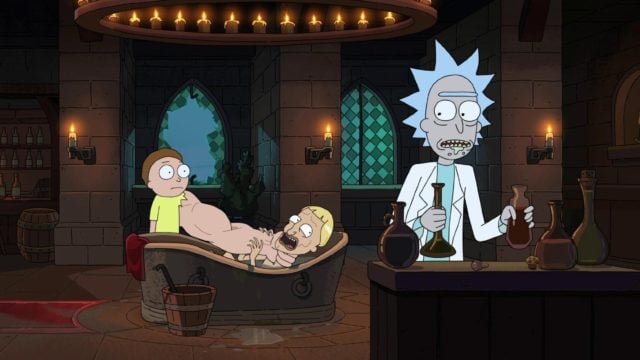 It’s been quite awhile since the smash hit adult cartoon Rick and Morty has been on the air, but after hard work and tons of preparation, the Adult Swim comedy has officially returned for its third season. The wait has been long and fans have been longing for the show’s return, but creators Dan Harmon and Justin Roiland would rather take their time to create a clever and satisfying product than pump out something unfinished to fit a certain release date. “Rickmancing the Stone,” has it feeling like Rick and Morty has never left television, wasting no time to pick up where everything else left off and never missing a possible joke either.

The episode puts all of its focus on the fact that Jerry is moving out, which is the most serious step forward that he and Beth have taken up to this point. While the couple has always had their problems and even considered splitting up before, Rick and Morty has never fully pushed them to that point and seems to always ensure that Jerry and Beth work things out in their own way and manage to stay together. While this still does not signify the end of their relationship, it is interesting to watch things escalate to a new level. It brings a new idea and aspect to the family dynamic that Rick and Morty has, which always grounds things back in reality despite the show spending most of its time off-world or in a random non-Earth setting. Jerry being kicked out opens a lot of new doors because of what it does to his family, mainly Morty and Summer, which is what “Rickmancing the Stone,” really focuses on.

As Jerry is preparing to depart for his new apartment, Summer wants nothing to do with him which causes her to push Rick into getting them away from home through whatever means necessary. The random mission puts the adventuring trio onto a world mimicking Mad Max: Fury Road; where everything is a dystopian future wasteland full of primitive cultural setups and a bunch of looting barbarian people. Rick and Morty really nails the expressions that their characters emote because utilizing this type of a spoof on Mad Max really is such an incredible way to display how both Morty and Summer are dealing with their parents separation. Including Summer into the adventures has made her an incredibly fun character to have tag along and it also brings out how direct of a person she truly is. “Rickmancing the Stone,” shows how she wastes no time addressing her emotions by jumping right in with all of the looting, pillaging and killing that everyone else is doing. She quickly ascends to the top after taking out the planet’s knock off Immortan Joe. Watching Summer provides a great balance because while Rick is so carefree, Summer provides a more youthful balance to her brother’s timid nature.

Morty’s handling of the situation shouldn’t be sold short though, because it’s as much fun as Summer’s approach, just less direct. Morty is the overly nice and non-confrontational person for nearly all of the situations Rick and Morty presents. His hesitant nature adds a lot to the show and rounds out the balance by always being the cautious and rational voice of consciousness character; yet, whenever Morty does need to release some anger or emotion, the explosion of everything is incredible. “Rickmancing the Stone,” does this by having Morty try to be understanding towards Jerry and the situation they have going on at home, but deep down he definitely has opinions on everything. Although it takes Rick’s meddling to force Morty into confronting his emotions, it becomes a fun ride with his barbaric jacked arm as the enforcer. The progression of Morty being controlled by an overpowered arm is pretty humorous at fist just because the character is brutally murdering people left and right against his will, but it quickly becomes apparent that Morty is enjoying the killing (at least to an extent) because of how it helps him take out his emotional anger. Morty’s relationship with his new arm pal grows so strong that he’s the one unwilling to let go when they finally avenge the arm’s family; trying to find any and all excuses to keep the revenge tale from ending so he won’t lose his friend.

Rick and Morty really comes back strong with “Rickmancing the Stone” because it has the familiarized blend of drama, well thought out conflicts, and never missing a beat with its comedy. The episode once again finds a way to ground these ridiculous settings and conflicts with actual problems like family drama. For Morty and Summer, both of their progressions within the episode of handling Jerry’s departure from home are well constructed and present two of the many ways children can react to their parents splitting up. Despite not necessarily being at the center of the episode, it also subtly shows off how much Rick can actually help his grandkids, and while his methods are all but traditional, he can provide them with an outlet. Rick and Morty is back and seems as strong as it has ever been, and this episode was a great way to re-establish what the show plans to bring to the table moving forward.