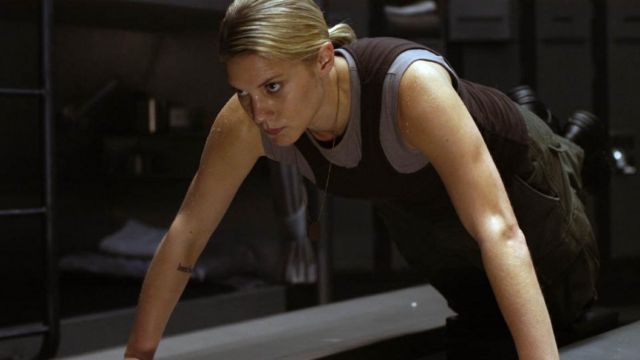 It seems the death of Kara Thrace from Battlestar Galactica is still sticking in the craw of many a fan after her supposed death in season three and then her re-emergence in season 4 that eventually led to her disappearance, or ‘death’, yet again. It would seem that comics aren’t the only venue in which death is used as more of a temporary holdover than a true stopping point, but it seems to be that Starbuck has indeed finally managed to disappear from the series. The continuity of it however is highly confusing since taking a character out in the manner that she went is something that no writer in their right mind could imagine trying to reverse or cheat somehow by saying that she got away. But the fact that she showed up in season 4 seems to indicate that someone actually did have that idea and decided to run with. But then when she disappears it almost seems as though the writer had a moment of remorse over what they’d done and finally just wrote her out completely as should have happened in the prior season.

Getting rid of a main character is difficult.

In terms of how the series goes and how popular it remains the main characters of any story are typically the glue that helps keep it together and keep it relevant for the fans. Those characters that are the main ones often become the beacons of their respective shows since they are the one that fans will look to and will seek to idolize when it comes to the show. If a main character isn’t all that popular then it’s not much of a big deal when they kick the bucket. If they’re a popular character however then their death can’t be a little flash in the pan that doesn’t inspire anyone. Their deaths need to be something epic, something grand, and need to have some sort of lesson or legacy left in their wake so that people can fully understand the very real impact that their death is going to have on the show. While Kara Thrace was obviously a big name on the show and managed to recreate the character of Starbuck, her ending was something that seemed rather anticlimactic and not at all worthy of the character.

The continuity issues that come from the death of a main character are hard to deal with.

It would have been perfectly okay if Kara hadn’t have made an appearance in the next season since it would have let fans know that once and for all she was gone. Of course the ending wasn’t really that great and some fans tended to question whether she made it out or not but the manner in which she appeared in the next season had a lot of people scratching their heads since it didn’t seem possible or even likely that she could have escaped her fate in the previous season. This is where continuity issues start to come into play and the whole thing starts to get kind of messed up since the writers seem to lose their place or purposefully leave off explaining everything and hand in a story that doesn’t account for every important appearance that occurs. Fans tend to look down on those that can’t seem to put enough description into a character’s story arc to really integrate them into any and all current situations.

A lot of fans love their favorite characters so much that they’ll gladly start rumors and gossip concerning how they could possibly come back and how it might be feasible that said characters could be seen again in a coming season. Thrace however shouldn’t be expected to come back anytime soon and in truth she probably shouldn’t have come back in season 4 for any length of time since the death she experienced in season 3 was enough to get a lot of people bent out of joint since it didn’t seem quite as poetic or as grand as it should have been. But then again there are people that believe it was for the best and her re-emergence was kind of a cheat as well as a cruel tease since she was gone after a while anyway. In truth fans will draw dividing lines between one camp of believers and another, but the issues of first killing off and then bringing back a main character tend to stymie everyone for a short period of time until they can find the stable ground that allows them to talk from what they think is an area of expertise concerning the show.

In terms of Kara Thrace’s death it’s something that was likely coming for a while and, despite being saddening for a show on which she was such a star, it was also kind of fitting.