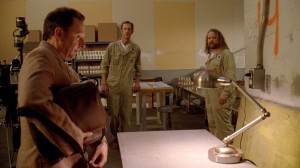 It’s the last episode of LOST ever. “The New Man in Charge” is a little mini-episode that follows the events of LOST‘s series finale, and it totally defied expectations while at the same time meeting them head-on. First of all, I need to clarify something: the spoilers that DarkUFO posted of the epilogue which claimed a Locke appearance and a Walt disappearance? It was almost entirely false, so consider yourself relieved if you had any spoiler-anxiety going on about having ruined your last LOST experience for yourself.

Instead, the twelve-minute vignette can be described as almost a two-parter; the first seven minutes are dedicated to one scene, while the second half is dedicated to another. If I had to describe the two, I’d call the first half the answer-fest, while the second half is more of a character resolution for one character we haven’t seen since season five (three guesses who).

I’m not going to spoil any of the answers for you, but the answer-fest answers a ton of questions through one really nice appearance by Dr. Pierre Chang. A lot of fans’ burning questions are answered, and we got some answers to questions we didn’t even know we had. It is a little chopped-together, though, and that half of the video seems like a checklist of questions being rapidly marked off. Is that a bad thing? Not for the mythological purists, who are, after all, who this epilogue is really geared for. Character lovers, you got your payoff with “The End,” so don’t expect any forgiveness or redemption to go on here.

The second half basically returns a character to prominence, though I can’t say too much without ruining the whole thing. In fact, the only thing I really have to say about that second half is that they really cleaned up that old DHARMA van.

Intrigued yet? You should be. The entire epilogue is sure to keep fans talking for at least a few months more with all the answers it hands us — and there are a few surprises that should have even the most casual fans grinning like maniacs. Lostpedia should be seeing a huge amount of DHARMA-related edits when the DVD sets hit on August 24.

You can pre-order the DVD sets here.