In case you missed the recap of the Chuck premiere’s first hour, “Chuck vs. the Pink Slip,” check it out here. 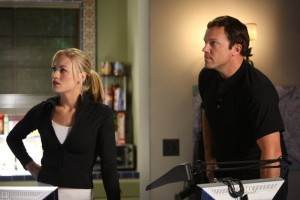 “Three Words” started with a reintroduction of Carina, played by Mini Anden. She is an undercover DEA agent, and one of Sarah’s best friends. With that out of the way, the episode proper began with a guy carrying a gold case being pursued through the woods. He is eventually shot by Karl Stromberg, a British neerdowell played by Vinnie Jones. As he is about to end the runner’s life, he receives a call from his “Smoochie.” Funny words from a dangerous man.

We then see Sarah out at a bar on a rare night off with Carina. Sarah doesn’t want to talk about work, but Carina continues to bring up Chuck and how Sarah is into him, which Sarah denies. Carina then introduces her fiancee who has just arrived. It’s none other than Karl; Carina is his Smoochie. Meanwhile, Chuck and Morgan are sitting in their bare apartment. Morgan encourages Chuck to shake off his malaise and go out. Chuck begrudingly agrees, and the two make their way to the same bar (Burbank has only one swanky bar?). When Chuck sees Sarah, Carina and Karl, he flashes on Karl as an international arms dealer. Chuck informs the lady spies of his flash, but duh!, of course Carina knows he’s an arms dealer: Karl is her mark (btw, why is the DEA going after an arms dealer? Shouldn’t that be ATF’s job?).

The next day Chuck returns to the Buy More. Clad in his “Sunday Finery,” Big Mike is back in charge, having been given a second chance to run the store now that Emmett is gone. After Big Mike’s pep talk about making the Buy More better, and Morgan’s insistence to Jeff and Lester that Carina is interested in him, Carina enters the store, grabs Chuck and brings him down to Castle. Karl will be hosting an engagement party at his house. Chuck and Sarah, posing as a couple, will attend and sneak up to the vault where the weapon hidden in the gold case is hidden. Casey will attend also as Carina’s father’s (much!) younger brother. We then got what I should say was “a gratuitous scene of Sarah and Carina in skimpy lingerie getting dressed,” however, what I will say is “we then got an artfully directed scene detailing Sarah and Carina’s preparations for the operation.” Part of the “preparations’ was Carina finding the charm bracelet Chuck gave Sarah last season (it was his mother’s and he wanted Sarah to have it). Carina admires it and asks Sarah if she wants to wear it, but Sarah refuses.

Chuck and Sarah arrive at the party and mingle. Chuck tells Sarah how much he misses being on a mission together, pretending to be a couple. Sarah replies, “It’s just a cover, Chuck.” Carina notices their mini-squabble and reminds Sarah that her and Chuck’s cover is a loving couple. Sarah, Carina notes, is being cold because she’s in love with Chuck. Sarah doesn’t have time to respond because they need to get to the vault during Karl’s toast. With Karl busy quoting The Godfather (“May out first child be a masculine child.”), Chuck and Sarah make their way to the vault. There are roving laser sensors between them and the case, so it would be up to Chuck to use the Intersect to get through them. At first, he can’t do it because he still wants to talk to Sarah about their relationship and how he messed it up. She says that he needs to calm down and concentrate; they would talk after the mission. Mollified, Chuck flashes some serious acrobatic skills and weaves his way through the lasers. He grabs the gold case and makes his way back. Pleased with himself, Chuck celebrates a bit too soon, and one of the lasers crosses him, setting off the alarm. The vault door slams down, trapping Chuck, alone, on the inside. As gas starts to pour in, and Sarah up in the ventilation shaft to save him, Chuck bears his soul, not to Sarah, but to Karl’s henchmen who had arrived upon hearing the alarm. Sarah takes the henchmen out and releases Chuck just in time to hear him wearily say the Three Words: “I Love You,” as he passes out in her arms.

Recovering back at Castle, Chuck hears Sarah tell General Beckman that she thinks another agent should train Chuck because she, herself, is the problem — Chuck’s feelings for her are too intense. The General refuses and orders Sarah to train Chuck. Sarah notices Chuck listening to her and tells him it’s time to train. With bos in hand, Sarah sparred, quite angrily, with Chuck. She implored him to flash some bo skills, but he can’t because he is too emotional. “You need to learn to bury your feelings deep inside,” Sarah yelled as she struck at him again. Chuck refuses as he doesn’t want to hurt Sarah. “Don’t worry, you can’t,” she replies. 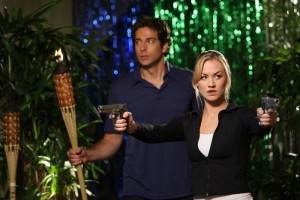 Meanwhile, Morgan is trying to convince Jeff and Lester that he can, indeed, get Carina. They suggest he host a housewarming party and invite her. When she walks in with the gold case, Morgan uses her request that he give Chuck the case as a bargaining chip, and gets her to agree to come to the party. Carina does come to the party, but with Karl in tow. Seems he saw the security camera footage of Chuck and Sarah stealing the case and he wants it back. As Chuck isn’t at the party yet, Karl and his goons decide to wait for him. After Jeff and Lester are knocked out by the drugs Carina put in the flammable punch intended for Karl and his men, Morgan decides he has had enough. He’s tired of Carina continuing to call him Martin, and doesn’t want to be her errand boy. So, he gives her back her gold case and kicks her, Karl and crew out. Celebrating his new-found backbone, he takes a drink of the drugged punch and passes out, too.

Chuck, Sarah and Casey see all of this on their monitors and need to stop Karl before he leaves. But there’s too many people that will be put in danger is Casey goes out guns firing. So Casey does the next best thing. Dressed in a robe and slippers, he takes a hose to the assembled partiers. With the crowd dispersed, the three move to take on Karl. Chuck is still uncomfortable around guns, so Sarah gives him a tiki torch. When a Mexican standoff ensues, Chuck throws the torch into the courtyard’s fountain, full to the brim with the flammable punch. The explosion causes all of Karl’s men to be knocked unconscious, but Karl still has Carina with a gun to her head. Chuck talks him down by telling him, in a thinly-veiled allegory about him and Sarah, that he understands how he fell for a spy. Chuck’s sympathy distracts Karl long enough that Carina can take him out. Immediate crisis averted, but Sarah’s crisis of the heart only increased.

Back at Castle, Chuck is told that he can’t look at the weapon in the gold case. It was something no one had seen before. After the General ends the call, she pleads with a faceless man with a lighter, named Shaw, to tell Chuck, Sarah and Casey what is going on. “They need to be prepared.” Shaw, unmoved by the General’s request, leaves her office. While cleaning up the apartment courtyard, Sarah approaches Chuck and says, “I’m listening if there is something you want to say.” But Sarah was right, he would need to bury his feelings if this was going to work.

Carina, it turns out, has never had a man tell her no. This turned her on to the point that she actually made Morgan a very lucky man. Not too shabby for Chucks’ bearded friend. Before Carina leaves, she gives Sarah a jump drive with the security camera footage showing Chuck’s confession in the vault. Chuck wanted to be a spy because he wanted to help the world. He was following Sarah’s advice that one has to put feelings aside for the greater good. Regardless of that choice though, he loved her. This confession brought tears to Sarah’s eyes, and “Three Words” to a close.

All in all, I thought the first two hours of Chuck were spectacular. If I had one quibble, it was that I thought there were way too many flashes in the first hour. I was glad to see that rectified in the second hour. The comedy was there. The action was there. The heart was there. I like how they’re working in Chuck’s new abilities, but he was still able to save the day without them (tiki in the fountain). I understand that they wanted the premiere to be a place new viewers could easily jump in, so they had to establish the tension between Chuck and Sarah. I’m hoping, however, that they will only tease the relationship so long. If The Office taught us anything, resolved relationship tension can actually be a breath of fresh air creatively for a series. I think there could be some great stuff between Chuck and Sarah if they finally do get to realize their love for each other. Other than that, I have nothing but high hopes and expectations for Chuck. Here’s hoping people will return for Monday’s episode in Chuck‘s regularly scheduled time slot. I’ll also be back tomorrow with another recap. Please leave any comments, thoughts or theories below.