Hello Chuck fans. Sunday night gave us the Season Three premiere of our favorite accidental spy. If you don’t quite remember where we were before the premiere, check out this summary. Otherwise, let’s get into “Chuck vs. the Pink Slip.” 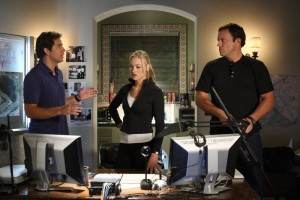 “Pink Slip” opened with a replay of last season’s finale and Chuck showing off his new-found kung fu expertise. Cut to six months later in Prague. Chuck, or rather his super spy alias Agent Carmichael, is being interrogated by a group of toughs. Chuck wants a silver case one of the henchmen is holding. When his request is unsurprisingly refused, he hears General Beckman in his ear imploring him to flash and get out of the situation. Chuck flashes his kung fu ability and disarms the men. When told to shoot the head bad guy, he hesitates, stating he is not a killer. Ignoring every action movie cliche, the previously knocked out henchmen actually wake up! Chuck knocks them all out again, grabs the case, and escapes. Now up on the roof, his only escape is to zip line across the courtyard using his belt. Despite the General’s pleas to flash the knowledge of how to zip, he hesitates again. The bad guys catch up to him and put him dead in their gun sights. Just before his life is about to end, a blaring light illuminates the night sky and General Beckman walks out. Chuck has failed his training session. His inability to call forth his flashes has left him, literally, with his pants down (well, that’s what happens when you use your belt for a zip line!).

It seems this is not the first (nor probably tenth) time Chuck has flunked his super spy training courses. The General has had enough of Chuck’s inability to control his emotions and let the Intersect do its thing, so she is crashing him out of spy school. Chuck protests, “You don’t know what I said no to,” and we are treated to a flashback of Sarah plotting their escape to a normal life. She wanted to run away with Chuck and be a “real person.” Sarah told Chuck to meet her at a train station in Prague where she would be waiting with new idenitites, passports and lives. Obviously, Chuck turned her down as he has been training for the past six months. Now a failed spy, Chuck tries to call Sarah. As her phone rings, Sarah is getting out of a pool. A man reclining in a poolside chair (and who affectionately calls Sarah “Honey”) tells her that her phone is ringing. She sees that it is Chuck, and throws her phone in the pool.

After the opening credits (God, I love that title song!), a depressed, bearded and be-robed Chuck is lying on the couch cradling a large barrel of cheese balls. A worried Ellie encourages Chuck to get up and do something, but he is too depressed, ostensibly from losing Sarah. Morgan, back from Hawaii for a few days, also tries to buck up his best friend, but to no avail. The only thing that can cheer up Chuck are the cheese balls, but alas, the barrel is empty. Noticing that the barrel was bought at the Buy More, Chuck decides to use whatever spy skills he actually did learn to good use. Under the disguise of a bearded ragamuffin, Chuck enters the Buy More to purchase more cheese balls. Emmett, who is still manager, mistakes him for whomever has been stealing Buy More toilet paper and has security stop him. Emmett embarrasses Chuck about his current state, however, despite the Intersect’s attempt to make Chuck get all kung fu on Emmett, Chuck is able to control himself. He learns from Jeff and Lester that Sarah has been seen at the Orange Orange, so Chuck departs post haste.

Arriving at the Orange Orange (and not a Subway yet?), Chuck does find his old partner….Colonel Casey. Chuck asks Casey if he has seen Sarah at all, but his negative answer is betrayed by his incoming phone call from Chuck’s would-be love. Chuck scopes out plans for a mission at the El Bucho restaurant in an out-of-commission Castle. Of course, Chuck is not invited 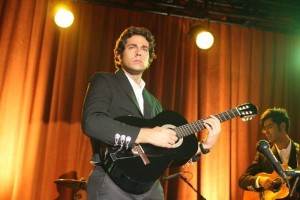 to participate in the mission, but he has plans to be there. After shaving and getting back into his Nerd Herd finest, Chuck goes to El Bucho under the auspices of a sound board computer malfunction. When Chuck confronts the radiant Sarah about what happened, she begs him to kiss her. Chuck is confused by the request so Sarah just grabs him…then slaps him. Really hard. Turns out the guy at the pool is Sarah’s mark — he is there to meet with a certain Javier Cruz over an illegal deal. Upon hearing that name, Chuck flashes that Javier Cruz is no black market courier, but an assassin. Chuck, now outside after being told to leave by Sarah and Casey, sees a mariachi guitar player entering the building. Having flashed his kung fu abilities in an attempt to get the locked door open, Chuck accidentally knocks out the guitarist, takes his costume and guitar, and reenters the restaurant. What Chuck didn’t notice was that he left his Buy More ID behind, or that the guitarist is actually Javier, the assassin. Chuck gets up on stage and flashes the ability to play classical Spanish guitar. As Sarah and her mark begin dancing to Chuck’s masterful guitar (and as an impressed bartender Casey looks on), Chuck sees Javier’s laser scope scan across Sarah. Chuck leaps from the stage and tackles Sarah. Javier escapes and Chuck is reprimanded by Sarah for blowing the whole mission.

Chuck returns to Castle and runs into Morgan. Seems Morgan wasn’t in town for “just a few days,” but rather Anna ran off with another chef, and worse!, Morgan could never master flipping shrimp into his hat. Like Chuck, Morgan flunked out of his desired job. Now, Morgan is living in the home theater studio at the Buy More (and is, in fact, the one stealing the toilet paper). Emmett discovers Morgan’s squatting, but gleefully decides to embarrass him the next morning. As he readies his departure to the strains of Wilson Phillips’ “Hold On,” Javier approaches Emmett asking where Chuck is. In typical Emmett superiority, he tells Javier that Chuck no longer works at the Buy More and that if Javier wants to throw down, he’s ready and armed with mace. Javier decides to walk away, but Emmett calls Javier a “pussy” (Let me interject here for a just a second. I have to say that I was absolutely shocked that Chuck used that word. I mean, the show is anything but racy or foul-mouthed, so I was quite flabbergasted. Well, for the next two seconds anyway). Javier did not take too kindly to this epithet so he did what assassins do, HE KILLED EMMETT!!! Right through the eye, and left for dead in the alley. If the writers of Chuck were going for something shocking and unexpected to start the season, well, they got it.

Sarah comes to Chuck’s apartment to say goodbye to him, with a handshake. Chuck tries to explain himself, but Javier is there. Chuck is knocked out, and when he comes to, he awakens in a Mexican cell. When Chuck can’t tell Javier who he works for, Javier kicks the crap out of him. As Chuck passes out (again), he has another flashback to the train station. Clad in a badass black trenchcoat, he approaches Sarah on the station platform. They share a real, loving kiss(!) as she explains that being spies is complicated, “This [the two of them] is simple. This is a real life.” Chuck demures and says he wants to be a spy, leaving Sarah alone on the platform. When Chuck wakes up, he hears Sarah talking to him from the next cell over. She tells him he has to free them. When he says he’s not a real spy, she tells him she’s known many spies, and “none of them can do what you can do.” When Javier returns, Chuck (now confident because of Sarah’s words) flashes his kung fu and takes out Javier. He takes Javier’s super-duper Ring smartphone and escapes with Sarah atop the roof of the building. Once again, he finds himself with only one means of escape: zip lining down to the courtyard below. This time he does flash zip line skills (was that like the tenth flash this episode?!), and safely gets them to the ground. Once there, they are cornered by Javier and his men. Chuck believes they are about to die, so he wants to talk because has to admit something. As he is about to tell Sarah, presumably, that he loves her, Casey swoops in on a helicopter, rotary gun ablazing. He takes out all the bad guys, picks up Chuck and Sarah, and heads back to the U.S.

Back at Castle, the General tells our spy team that she is putting Operation Bartowski back into the field to take down The Ring. But as the General explained privately to Sarah, in reality, Chuck with Intersect 2.0 is dangerous. While they previously protected Chuck from the world, Sarah now needs to protect the world from Chuck. Chuck and Casey are able to regain their jobs at the Buy More (it was easy as Emmett was now gone to manage the Anchorage Large Mart, Casey knowingly lied). As Ellie and Captain Awesome decide to move into a now vacant apartment in the same complex, Chuck needs a roommate. Morgan, now also a Buy More re-hire, happily obliges. With his old life seeming to have returned, Chuck stands alone in the apartment courtyard pondering what could have been. Sarah approaches saying she is ready to talk about what happened in Prague. Chuck admits that he has always wanted to make a difference in the world, so he tried to be a real spy. Sarah tells him that he is a real spy, but real spies need to keep their feelings to themselves. Chuck needs to keep himself in check if the Intersect is going to work properly. Whatever could have happened, is not going to be. As Sarah leaves, Casey emerges from his place, telling Chuck it’s time to train. In a boxing ring, back at Castle, Chuck flashes proper boxing technique and the episode ends in a perfect Rocky III mid-punch freeze frame.

Whew! That was quite the action-packed season premiere. But wait….there’s more! Click here for the second half of the Chuck season premiere, “Chuck vs. the Three Words.”