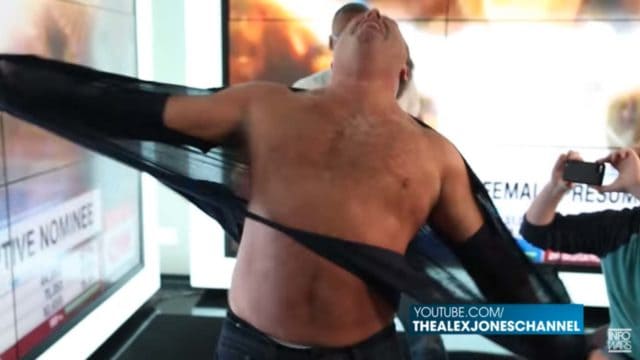 Whether or not Alex Jones, the insane host of Infowars is in fact a performance artist putting on a show for his audience is something we may never know.   What we do know is the fact that he keeps going on his show acting like a lunatic and spitting out conspiracy theories that have zero evidence to back themselves up.   Add to that mess, the guy’s more frequently taking his shirt of these days.   Jones was recently quoted as saying he “bagged over 150” women before the age of 16.  Also, more than likely a lie.

Just why exactly Jones likes to bare his beefy, barrel chest remains a mystery–a profile in Der Spiegel says he pops that top “without explanation”–so New York magazine sought some outside counsel.  They enlisted the help of four psychologists to decipher this need to show his chest.  The resulting analysis is pretty interesting.   Here’s some analysis from psychotherapist John D. Gartner:

I think Alex Jones shares a diagnosis of malignant narcissism. First of all, taking off your shirt is exhibitionistic, so that’s the narcissistic component. But at the same time, he’s doing it as an act of aggression. It’s not like a striptease, it’s like a “f-you! You’re gonna be forced to look at this and I’m dominating you by making you do that.” It’s a power play, but it’s a very narcissistic one. A malignant narcissist, they have four components: they’re narcissistic, they’re antisocial, they’re paranoid, and they’re sadistic.

In that one act, he’s combining all of those impulses: It’s a self-exposure, but it’s also dominating other people, it’s throwing you off balance.