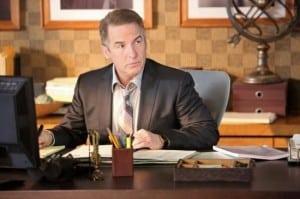 Tonight’s episode of Private Practice was decidedly a moving hour.  With a focus on Sheldon, the episode exposed his fears, and brought Sarah Nolan’s case back to the forefront.

The episode opened on the night that Sarah went missing from the Emergency Room at St. Ambrose.  If you had been wondering why Sheldon had showed up in a suit, we find out exactly why — he was on a date with his ex-wife, Laura.  The two flirt, simply enjoying the fun of their vacation-esque relationship until Sheldon breaks the news of his prostate cancer to her and the fact that he hasn’t yet decided what to do, and Laura leaves him once again.

As it so happens, Sheldon is also seeing his own therapist.  However, he refuses to answer her questions, citing that he doesn’t have any issues.  Sheldon has always been the optimist of the Seaside doctors, and the options for cancer treatment just don’t seem appealing.  Basically, he spends his session not talking about things.  He’s so adamant about not discussing it, in fact, that he doesn’t tell anyone at the practice.

Sheldon’s patient Nick shows up again, as well.  Yet, instead of the depressed and suicidal man we saw earlier in the season, Nick is happy.  Giddy even, over the new love in his life.  The change in behavior is a huge red flag for Sheldon, who is convinced that his patient is actually talking about missing Sarah Nelson, especially when he hesitates to reveal details about her.  His therapist is not so convinced, suggesting that Sheldon may be creating the scenario to ease his own guilt of accusing the man of kidnapping Sarah in the first place.

Though this episode jumps to several ‘days’ over the course of roughly three months, we get the news that Sheldon is going for daily scans each morning, rather than his cover of the gym.  It is in the waiting room that he meets Miranda, whom he had previously met before, albeit briefly, the night Sarah disappeared.  Miranda bluntly explains to him that she doesn’t like getting close to others in the waiting room, doesn’t like getting the news that they’ve died, but casual small talk is okay.

The entire second act of the episode takes Sheldon’s many conversations with Miranda, playful and friendly conversations, and juxtaposes them against Sheldon’s lonely scans and his sessions with Nick, who believes that he’s well enough to end his treatment.  What ties this all together?  As Miranda and Sheldon discuss their exes, Miranda comes to the conclusion that maybe it’s just better to have someone to be alone with.

According to Nick, his new relationship with “Alyssa” is moving slowly.  He’s nervous, worried that sex will bring things to a new level.  Still skeptical, Sheldon advises him that taking things slow…is healthy.  Things get even more frustrating for Sheldon when Miranda breaks her news to him — her cancer has metastasized to her brain — and instructs him that he should find someone else to talk to.  He almost takes her advice when visiting Charlotte in the hospital (now we’re up to the point at which last week left off).  When Charlotte comments on having to lie in one place and simply think about everything bad that can happen it seems as if Sheldon almost commiserates with her, truthfully…but he chickens out at the last minute and reverts back to his ‘gym’ excuse.

Again we see a few passing moments between Sheldon and Miranda in the oncologist’s waiting room.  This time, however, Miranda makes an attempt to ask Sheldon to lunch.  The psychiatrist brushes her efforts off, though, even possibly missing her signal altogether.  But instead of giving us time to believe Sheldon is simply stubborn, we’re immediately thrown into another therapy session in which his doctor questions why he can’t take the next step with Miranda.  After a failed shot of explaining that their friendship wasn’t intended to leave the waiting room Sheldon admits that he’s afraid.

Of what, the therapist asks?

An outburst of no sympathy for pedophiles brings Sheldon right up to another session with Nick — but now the man seems off, borderline depressed, again.  As he tells Sheldon, his relationship with “Alyssa” isn’t working out.  She doesn’t seem happy and he thinks he needs to end it.

To make matters more upsetting, the next time Sheldon walks into the waiting room…it’s empty.  No Miranda.

Fearing what Nick might do to Sarah — Sheldon still believes Nick has her — he goes to the police, suggesting that they have the wrong man, yet gets shot down by the slight inhibition that they need probable cause to search Nick’s home.  And of course, Sheldon has no proof aside from a gut feeling.  Determined to prove his hunch, Sheldon plans a new session with Nick for a time when the man will see Sarah’s distraught parents.  This session, paralleled with Violet and Sarah’s parents’ pushes the fast forward button on this storyline.

Nick is adamant that the little girl’s parents were horrible — yelling and fighting in front of her that night in the ER.  His own belief that she’s still alive is a stark contrast to Sarah’s father’s belief that she’s dead.  It seems horrible that a father would be so set on believing that his daughter is not alive, but the reality of the situation hits when Ron exclaims that he has to, otherwise all he can imagine is his frightened and endangered little girl.

Once Sheldon hears Nick’s thoughts on that fateful night, he sets on his patient — pressuring him to admit that he took Sarah.  Nick fights back, accusing Sheldon of being powerless and weak (something Sheldon had been grappling with all-hour), and stands to leave…however, officers are waiting outside the door to take Nick to be committed, as per Sheldon’s prior decision to prove his gut feeling right.

In a dangerous move, Sheldon lies to an officer that Nick confessed and follows a squad to the man’s home, looking for Sarah.  For a few beats, it seems as if Sheldon may have been wrong the whole time, until Sarah is found…cowering underneath a bed in an eerily made-up little girl’s room in Nick’s basement.  Sarah tearfully cries for her mother, afraid because she had run away, but begs Sheldon to stay with her and to sing to her while they wait for her parents.

In the final moments of the episode we see how Sheldon is still distraught over essentially letting Nick keep Sarah for months.  Violet’s praise of his efforts fall flat as the man sighs away, the sore feeling lingering as Sheldon heads for yet another scan.

Except — Miranda does walk in.  Sheldon doesn’t even give the woman a chance to explain her absence before kissing her.  The moment is a light at the end of the dark episode, brighter when Sheldon insists on seeing her outside of their waiting room.  And though she’s dying, as she argues, he replies “not today.”

This episode exemplifies why I like the formatting of these final episodes.  Though we are being tossed back and forth on the timeline, the narratives are stripping these characters down to their core, in a way that we don’t get to see in a normally styled episode.  I feel like this worked particularly well for this episode.  Sheldon is one character who has always been pretty likeable, yet we never really saw that much of him, or learned about him.  This episode allowed us viewers a peek into Sheldon’s insecurities, though he generally comes off as being pretty optimistic.  Clearly, Sheldon is not fine.

I’ll admit, the middle chunk of the episode was slow.  The story crawled and seemed repetitive due to the smashing together of sessions, discussions, and scans.  But, by the same token, I wouldn’t expect a fast-paced suspenseful episode for one focusing on Sheldon.

I applaud Brian Benben’s performance in this episode.  His performance made this episode, particularly in the little moments — his reaching out and singing “Twinke Twinkle Little Star” to Sarah made the episode.  And all of the actors, really, are doing an amazing job of jumping back and forth in the timeline with their characters.