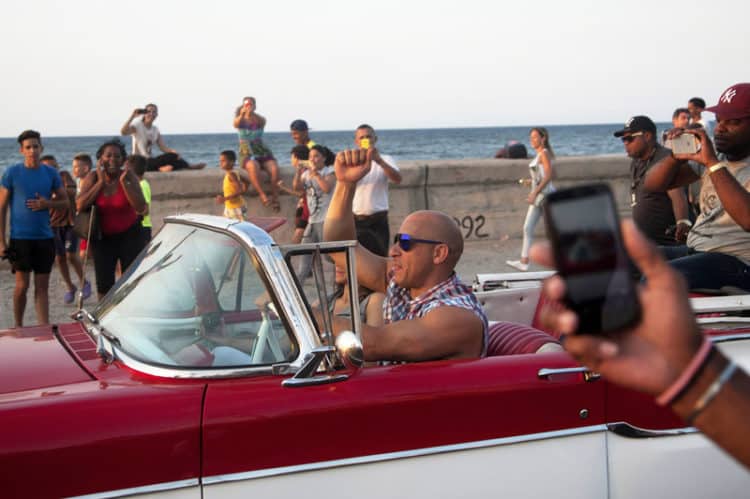 At this moment it sounds as though the notion of a Jurassic World/Fast and Furious crossover is being pushed simply for the fun of it and to see how many people are going to take it seriously. The fact is that of the two franchises, people are thinking that it would be more feasible in favor of the Fast and Furious franchise than it would for Jurassic World, simply because when looking at the two, Jurassic World is actually the more grounded. Yeah, you read that right, Jurassic World is more grounded than Fast and Furious. There’s an explanation there and it’s pretty simple since the Fast and the Furious have a pair of characters going into space with a jet engine strapped to a car in the upcoming F9 movie, where Jurassic World is featuring a landscape where dinosaurs have been introduced and are now challenging humans for territory. The latter is a little more grounded in reality, not much, but a little, since the dinosaurs were brought back using methods that aren’t scientifically sound but have more basis in reality than a movie that features street racers being recruited by a shadow agency to help do their dirty work in retrieving items and destroying them when necessary.

Playing along with the joke, these two franchises might appear to deserve each other since they’re both stretching the reality they’re based around in a very profound manner. If anyone thinks that the life of a street racer can lead them to the same places as Dom and his crew then they need a serious reality check since street racing is more likely to get them incarcerated. In terms of Jurassic World, there have been plenty of rumors in recent years about scientists wanting to clone dinosaurs, but the thing is that without DNA, which is bound to be pretty degraded after millions of years, it’s not bound to happen. Anything that might be created in a lab would be a living, breathing creature, but it wouldn’t be the same. Mashing these two together in a movie would be insane but it’s something that a lot of people might actually push for.

Seriously, some folks might love to see this, in fact, it’s easy to imagine Roman running from a T.Rex or a velociraptor, shouting in his customary style and talking about teeth marks on his backside perhaps. It would kind of depend on who else would be in the movie as to how they would all react since each one of the team would be likely to do something different. But it’s fair to say that if this does happen that it would be like an upgraded version of Sharknado, meaning that it would be the A-List spoof movie without actually being a spoof movie. Yeah, it sounds awkward, but so does the idea.

This is the kind of cowboys vs. aliens type of idea that has been pushed by kids all over the world when playing with different toys, imagining what might happen if a G.I. Joe encountered a dinosaur, or if a Transformer met up with a dragon from a fantasy story, and so on and so forth. It’s a mash that people have thought up for a long time now, a mismatch of epic proportions that a lot of people want to see just because it hasn’t happened lately. There is some interest obviously since some people figure that if a good enough story can be told to link the different elements that it wouldn’t matter who or what was in the movie. But if this ever does happen then the credibility of both franchises, which is already walking a very fine line, could possibly lessen simply because, well, this is kind of a ludicrous idea. It’s not exactly a desire to see stories kept apart that fuels this idea, but a desire to see both franchises keep to their respective lanes, which have worked thus far.

Keeping the two franchises separate sounds like the best idea at this time, especially since it sounds as though both of them are looking to keep expanding, and there’s plenty of room for both of them to grow without running into one another. Granted, some franchises can mingle and make it work since their premises are close enough to each other and the suspension of belief has already taken full effect. But when two franchises are this different and are bound to be smashed together like a child wielding clay in one hand and playdough in the other, there’s a bit of concern to be had at that moment. In order to keep both franchises moving forward in the successful manner they have been it’s better to keep them separate, no matter how badly people want to see if Dom and his crew can handle a dinosaur.