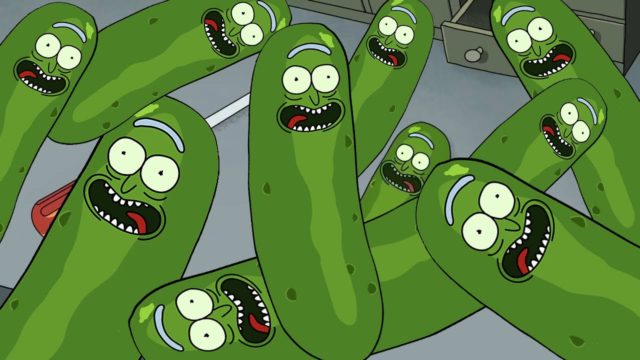 Tell me this isn’t real please. Tell me it’s a spoof. Tell me that Pickle Rick did not just get a TMNT styled commercial with an enemy named RATULA!

I’m still trying to wrap my mind around why Rick and Morty is so popular and still trying to figure out just why Rick turning himself into a pickle is so great. It’s all a matter of opinion at this point and no one that loves the show has to care about mine but truly and honestly the point of this show seems to be pure grade A insanity. It’s still surprising then that I don’t love it because insanity is something that a lot of writers fully embrace without giving it a second thought.

Maybe it has something to do with the fact that Rick and Morty is trying to inject reason and order within the insanity and the result is coming off more like a rancid 7-layer burrito than a cohesive show. But if that’s what it takes to get people’s attention the creator surely struck gold with this piece of whatever.

It’s generally not cool to trash anyone or their ideas but once again that matter of opinion raises its doubting head and speaks again. Rick and Morty just seems so insanely bent that trying to figure it out is just like begging someone to beat you into submission with a Nerf sword. It might eventually make a point but up until then it’s just flat out silly and very annoying. See? The show must be wearing off on me since that seemed to make no sense at all.

And now, sigh, Pickle Rick again. He turned himself into a pickle, and then armed himself with what looks like pirated rat parts that are fused onto his pickle body and somehow placed under his bodily control. That’s kind of amusing since pickles aren’t really known to have any type of muscles or tendons or anything else that could possibly allow a pair of artificial arms and legs to move about.

But this is Rick we’re talking about, so maybe as a pickle he’s still a man with muscles that can automatically connect to the new limbs and form a cerebral bond at the same time that can allow for flexing, locomotion, and even complex movements. If you’ve seen the show you shouldn’t be too surprised by my reasoning. If this toy were to follow any of the supposed “rules” of Rick and Morty then it would be able to be explained away very easily. Personally I think a talking, aggressive pickle is a matter for the people Kaiser Pickles to sort out.  And Ratula? Really? So how did that come about, was a rat sucking blood from a vampire or did he mistaken for a late night snack by a bloodsucker? Remember, it’s Rick and Morty, anything seems to go in this world.

Leave the action figures to the Turtles guys, this is just disturbing on so many levels. And I doubt it’s kosher. Oy.