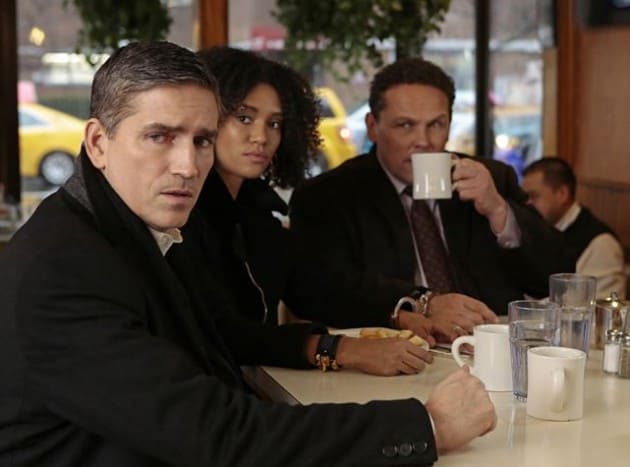 The most difficult thing about creating a work of science-fiction like Person Of Interest is that there is an extended suspension of disbelief required. It’s one thing to create a world such as Mad Men, which is just standard domestic fiction; or create one like Supernatural, which so clearly exists in a world outside our own that we start with a blank slate. But sci-fi the Person Of Interest way attempts to both keep the world we live in now and combine it with futuristic elements. You can lose yourself in that, because the show is built on big concepts and ideas. Two AI’s are battling out for dominance, causing stock market crashes and predicting terrorist threats is quite a load to deal with. But the sci-fi “big concepts big ideas” start to bleed over into the rest of the stuff that isn’t sci-fi, and that’s where things get bogged down. WE leave the Uncanny Valley that makes us so uncomfortable in the first place and take our first steps towards the audience’s “interruption of the dream”; that is, they start to see the show as a work of fiction, instead of being immersed in the narrative as true text. Characters become too smart; events happen too neatly; plot starts to supersede character.

Person Of Interest has juggled those things pretty perfectly for these first four seasons. They began as a high-concept drama that evolved into a character study for nearly a full season, turning an entertaining if shoulder-shrugging piece of work into one of the best shows on television. But this episode worries me. Cracks are beginning to show, and have been for some time now. We’re being stretched too far in the sci-fi direction and are losing the elements of strong narrative that got us here in the first place.

It began with Samaritan’s manipulation of the town. That in itself wasn’t bad at all; that was actually a nice character piece. But then they come across those potential mind control devices, and that made me nervous then, though I couldn’t put it into words. But I can now: what worries me is that these people are going to become mindless zombies, freed from consequences because of Samaritan’s control. But what’s made this show so spectacular is that, really, nobody is sure who is doing the right thing. Yeah, Team Machine is doing so on a microlevel; saving lives, protecting innocents and the weak. But Samaritan is making a real difference. He could easily control the stock market and keep prices steady in the event of a crash. His charter school is interested in creating independent, educated humans who can take care of themselves successfully. His methods are horrific, callous, and immature, but he is sacrificing some to save many. The real conflict in the show is not whether Samaritan is a Dr.Evil type villain; the conflict is wondering if we’re rooting for the wrong side.

Tl;dr – The show is getting too cute.

I was willing to deal with it up until the moment that it was revealed that Dominic basically set this whole thing up to get a face-to-face with Harper to offer her a job. That’s combined with Root’s ingratiation with the company of Caleb Phipps, an early (early early early) POI that Harold and Reese saved. The implication is that Root built this app to bring to Caleb’s company so that he would offer her a job on a specific project. That’s a lot of RNG to deal with, isn’t it? I mean, I’m no expert on the art of manipulation (though I did sleep in a Holiday Inn Express last night), but the amount of variables in play here is pretty remarkable. I just don’t like when plans that random get to fruition; it’s like watching a pitcher hit a homerun in baseball. Yeah, it could happen, but let’s be real here; gun to your head, would you bet your plan to save the world on it?

I hope that Person Of Interest doesn’t go back to the show it was when it started. That was a good show, often mediocre; this show is near-great, with flashes of perfection. A good rule of thumb: when you can trade your high-concept drama for a character one instead, and nobody notices, you’re probably doing something right.

Having said that, this was still really solid television. The writing has been better (outside of the stuff I mentioned before) and the pacing was oddly poor, but it was still fun to watch. Hopefully, I’m imagining those things that I mentioned before. We’ll see, I suppose.

– Root has undergone a change, but I don’t know what she’s about yet.

– I think it’s gonna take The Brotherhood, Elias, and Team Machine to take down Samaritan. And at the end of that battle, there’s gonna be the mother of all power vacuums.

– Reese is the foundation of this show. When things go wrong and when the house built upon him starts to quiver, he never falters. I am glad to be reminded of that.