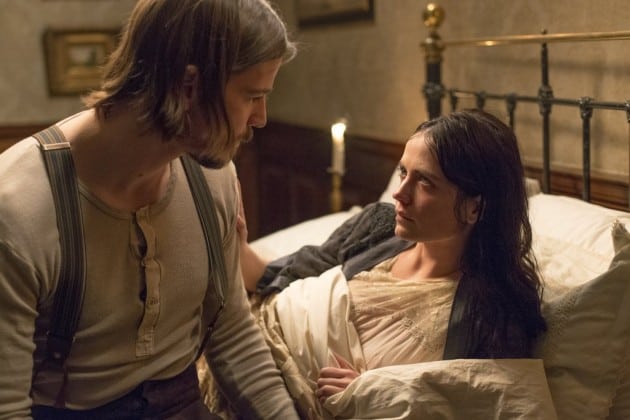 There are few shows on television as good at killing time as Penny Dreadful, which in both seasons has taken relatively small stories and turned them into grandiose tales spanning lengths much longer than the entire narrative would suggest (the arc of Season 1, for example, is extremely tight, a trend we’ve seen continued this season). A meatier 10-episode order for Season 2 has given Penny all the more room to drown its audience in atmosphere and aesthetics. Thankfully, there isn’t a finer world to get lost in than Penny’s exquisitely dark Victorian London, so when an episode like “Above The Vaulted Sky” comes along and inches forward the plot, it never turns itself into a boring affair – and not just because it’s an episode constructed to end on a lengthy sex montage, either.

Well, almost never; Caliban continues to be the show’s most glaring flaw, a character who sticks out physically and thematically in equal measures. Callous and wounded, Caliban’s passive approach to life lacks the zest and intensity of other characters, something no long-winded solliquoues can uplift, even in the presence of the enigmatic Vanessa Ives. There’s really only one place this story is heading – the definitive fracture of Viktor and Caliban’s awkward truce – and Penny Dreadful is struggling to make Caliban’s side of the story engaging. The dialogue between him and Vanessa in the sick pits is lyrical, no doubt, but it seems to be in service of languishing over an established point, that the woman he demanded be created for him doesn’t actually love him.

That story is so much more interesting on the other side of the coin – with “Lily” and Viktor – that it robs Caliban’s emotional distress of any real weight. He feels silly, his clown paint contrasting him with the rest of the Penny Dreadful players; and this episode doesn’t even get back into his new job, which could see him imprisoned by a man dying to cash in on the thrills of the grotesque (a story that continues to flounder on the edges of the show). His presence takes away from the other, more satisfying stories happening with Viktor and Lily, and in the larger context of the show, the tales of the Nightcomers and the group’s preparations to protect themselves from them.

“Vaulted Sky” is an hour about the darkness of temptation, and the power of control over another human; whether it’s how Vanessa intently watches Lily’s behavior at lunch, or Poole’s continued seduction of Ser Malcolm, “Above The Vaulted Sky” utilizes lust as a literary weapon – and though it ends on an orgy of sex scenes that line up in a neat, cliche manner, captures the show’s dark romanticism in a bottle, colored blood red by the surrounding scenes of Evelyn working her voodoo magic on Malcolm’s wife, driving her to suicide by poking at a ‘fetish’ (voodoo doll) that seems to be made of real brains.

There are movements of story in other corners of the episode – the Inspector trading barbs with Ethan, Mr. Lyle’s continued translation work – but these moments all come in service of the episode’s central theme, exploring numerous attractions between characters and reveling in the discussions that spring from it. Sure, Dorian and Angelique’s story feels grossly isolated from the rest of Penny Dreadful, but it doesn’t make their discussions about desire and love any less engrossing; the same goes for some of the episode’s simpler exploration into these themes, like Lily’s utter repulsion in the presence of her assumed betrothed (and how Viktor’s God complex is feeding into this, in odd ways). Even when it’s not really going anywhere, Penny Dreadful remains as entertaining and unsettling as anything on television; in an episode as straightforward as “Above The Vaulted Sky,” that ability to lean on ambiance turns a perfunctory hour into an intoxicating one.