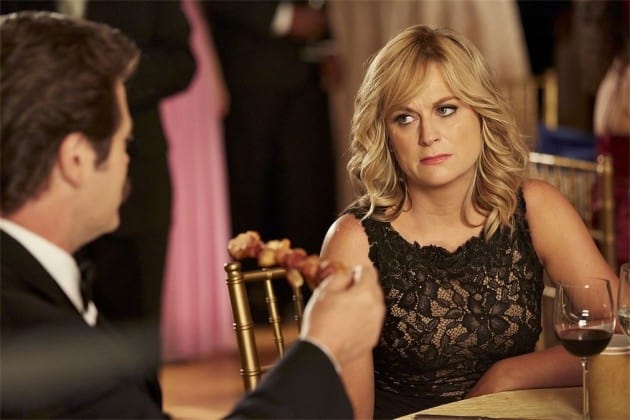 Maybe it’s because this is Parks and Recreation‘s final season or maybe it’s because the show’s been off the air since April and I just really, really missed it, but I found tonight’s two opening episodes of Season 7 to be absolutely fantastic, easily better than pretty much anything Parks and Rec did in its sixth season (aside from “Ann and Chris” and the hour-long finale, “Moving Up) and much more fun than a comedy this late in its run typically is. Perhaps it was the three-year time jump breathing new life into the series, but both “2017” and “Ron and Jammy” felt so fresh and fun that I could easily envision this “new” version of Parks and Recreation going on for another six seasons.

Yet, while many things have changed in Pawnee since we last saw the whole gang together at the Unity Concert, Parks and Recreation as a whole, still feels the same, even if it is a bit more energized. Sure, Leslie and Ron are currently at odds, since he decided to leave government work behind and move to the private sector two years ago (with his simple but accurately tiled new business the “Very Good Building and Development Company”), but underneath their bickering, which is a little harsher than it was before, you can still tell how much the two of them care for one another, particular in tonight’s second episode as they team up to help Jamm escape the evil clutches of Tammy.

Similarly, April and Andy may not be as young and carefree as they used to be now that they both have time-consuming careers and (gulp) renters’ insurance, but they’re still the same goofy, eccentric pair that we’ve always known and loved. April is continues to be a lover of the dark, weird, and bizarre, even if she’s searching for a profession that evokes the passion that Leslie has always found in her work (a search that Ben, who calls April a “friend” and even receives a hug from her, will help her with this season). Meanwhile, Andy remains full of boyish energy and wacky ideas, as he drunkenly convinces Tom to travel to Chicago with him to visit Lucy (Natalie Morales), who he believes could be the soulmate that Tom’s looking for.

Just like the rest of the Parks and Rec gang, things are different but still the same for Tom Harverford, who has finally reached mogul status in Pawnee with the success of Tom’s Bistro, along with many other businesses, but still seeks something more. In this case, it’s an emotional connection, one that he only ever truly felt with Lucy, who returns to Pawnee to work for him, even though she has a boyfriend.

And honestly, “the same but different” is all I really wanted from Parks and Recreation in its final season. I admit that I was worried when I saw the first trailer for Season 7, thinking that the series may rely too heavily on jokes future-related jokes made possible by the time jump, but the references here (like the Cubs winning the World Series and Kevin James rebooting the Bourne franchise) are small and funny and very in vein with Parks and Rec‘s style of humor.

The show’s heart, the sense of comradery and family between its characters, still exists and is very much present in both of these episodes, whether it’s Tom reading his speech to Ben (side note: how funny were Adam Scott and Anziz and Ansari crying in that scene?) or Leslie and Ron’s brief moment of warmth as they reflect on rescuing Jamm from Tammy. That Parks and Recreation still remains itself in its final season, when the temptation to doing something very big and different had to be there, is all I could ever ask from the series.

Sure, we still have 11 episodes left to see how Leslie and Ron will mend their friendship, what new career April will discover that she loves, and which group, Gryzzl or the National Parks Department, will obtain Jessica Wicks’ inherited Sweetums’ land, and I’m very interested to see what will happen as these new stories unravel during the remainder of Season 7. But frankly, I’m just glad to have more time to spend with Leslie, Ron, April, Andy, Ben, and the rest of these wonderful characters, and if we continue to get more great moments like the ones found in “2017” and “Ron and Jammy,” it will only make the inevitable goodbye to this show even more bittersweet than I had originally thought it would be.

– What I think I’ll miss most about Parks and Recreation, even more than the warmth and happiness that the show supplies me with on a regular basis, is how much it makes me laugh. I literally had to pause both of tonight’s episodes multiple times because I was laughing so hard that I couldn’t keep notes. For a comedy in its seventh season, that’s quite an accomplishment.

– Structuring the show’s final season around Leslie and Ron’s broken friendship, the most important relationship on the show in my opinion (no offense to Leslie and Ben or April and Andy’s romances), was a fantastic decision by Michael Schur and the Parks and Rec writing team.

– I wonder if this will be Megan Mullally’s last appearance as Tammy on the show. If so, she went out in spectacularly outrageous fashion, just as Tammy should. Also, her presence in tonight’s second episode made Jamm the funniest he’s probably ever been on Parks and Rec.

– Sweetums’ hot fudge pipeline burst and polluted Pawnee’s water, although, Leslie points out one positive from the incident: “Admittedly, it did make the fish taste delicious.”

– I love how Tom rips off of Matthew McConaughey’s Oscar speech from last year, telling the reporter that interviews him that his hero is himself in five years.

– “Bacon-wrapped shrimp? I fit seven on this one. It’s a masterpiece.” You are the true masterpiece, Ron Swanson.

– I want an entire bottle episode of this final season dedicated to Jon Hamm’s Ed and his adventures at Subway. Even though Hamm’s brief cameo was fantastic, there was still not enough of him in this episode.

– Which would you rather have to protect yourself from Tammy: Ron’s homemade chastity belt or the crotch-blinder?

– Joan Callamezzo’s ninth memoir is titled Game of Joans, because what else would you expect her to call her?

– Leslie has a very unique retirement plan: “I’m going to work until I’m 100 and then cut back to four days a week….I’m already so bored thinking about that day off. Maybe I’ll go to law school.”

What did everyone think of tonight’s Parks and Recreation premiere?