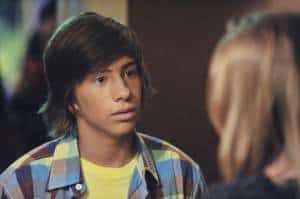 No Ordinary Family is back with its strongest offering yet. ‘No Ordinary Vigilante’sees Jim continue his quest for criminal justice, Stephanie make an important discovery in regards to her family’s new genetic alterations, and Daphne and JJ are finally given some worthwhile high school material. While I would still like to see the family team up to fight crime in a way that last week’s ‘No Ordinary Ring’failed to deliver, the individual storylines here were strong enough to satiate me for now.

Let’s start with Jim. At George’s urging he decided to help clean up the local park, where a slew of recent muggings were going unnoticed by the police. Jim donned his new ‘costume'(a black hoodie) and set out into the night. As he quickly discovered, he was not the only one trying to take out the trash. A second vigilante was shooting the muggers, which led to a case of mistaken identity as a couple of eyewitnesses spotted Jim near a downed criminal.

This led to a great moment in the precinct where Jim had to disguise himself Clark Kent style with a pair of glasses as he tried to botch the sketch of himself that the eyewitnesses were describing. They insulted the assailant’s round face and butt chin, much to Jim’s chagrin.

This whole story wraps with Jim confronting the shooter, a man who has grown weary of life since the death of his child and has decided to exact revenge on every lowlife he can find. In what was the most poignant moment the series has offered so far, the man asked Jim, ‘If you love your kids so much, what are you doing here with me?’This question clearly hits Jim hard as he realizes that time spent fighting crime can easily drive him apart from his family.

Daphne was very sly and confident throughout most of the episode as she used her mind reading to determine the location of a party she was not invited to. It was very amusing to see her so immensely sure of herself that she would just show up and act like she was supposed to be there. Before getting kicked out of the party she offered to buy more alcohol, knowing that she could blackmail the clerk at a convenience store that she had earlier mind-witnessed stealing cash from the register. Of course, this all went south when the clerk just called the cops on an underage girl trying to buy booze.

A strange thing happened in this scene. As Daphne was trying to buy the alcohol, I was sort of rooting for her to get it. When she was caught, I felt bad for her, sort of in the way I feel bad for Dexter after a botched kill. Something about the way the show presented this series of events didn’t even make me stop and think ‘hey, this girl should absolutely not be drinking’. This isn’t really a complaint, just a note on an interesting tonal choice. The whole thing seemed more played for comedic effect than as a PSA about underage drinking. 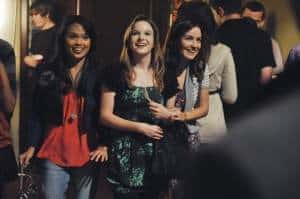 JJ spent the episode with the new love of his life, and thankfully he didn’t have to feign Judaism this time. After watching the football team practicing, he quickly became an expert in field dynamics,
reducing every play, pass and juke down to simple math. After striking up a deal with the coach, he got his shot to try out for the team, and impressed them all with his precision passing as a quarterback.

I get that JJ can quickly deduce angles and trajectories and how this would benefit him, but how could he have mustered the arm strength and finger technique to throw a perfect spiral on his first shot? This requires an extra bit of physical dexterity that we haven’t seen his power demonstrate. I presume he just has a bit of natural talent to help out here, though the show certainly doesn’t present him that way.

Please don’t tell JJ I said that. He’s very sensitive about these things.

JJ’s teacher continues to confound me. I am very thankful I never had a teacher in high school that was so vindictive and out to see me fail. I find myself hoping he is some sort of villain with powers just so that the show feels justified in presenting him as an over-the-top beady-eyed schemer, like when JJ threw a successful pass on the football field and we cut to the teacher staring ominously.

Stephanie’s story did a little to continue the mythology, but that’s about it. More interesting than the discovery of a dead researcher’s work that could lead to an explanation of the Powells’powers was the continued delight that Autumn Reeser’s Katie has become. Her facial expressions and mannerisms deliver some genuine laughs, as when she and Stephanie were confronted on what secret thing they were talking about. Stephanie’s response of ‘work’mixed with Katie’s ‘periods’, and the ensuing talk, were priceless.

No Ordinary Family continues to improve. The writers are figuring out interesting ways to engage the audience, mixing conventional dramatic tropes with superhuman abilities. We still haven’t reached the Incredibles level of family crime fighting that I’m sure many are hoping for, but it will come. In the meantime No Ordinary Family remains on an upward climb.