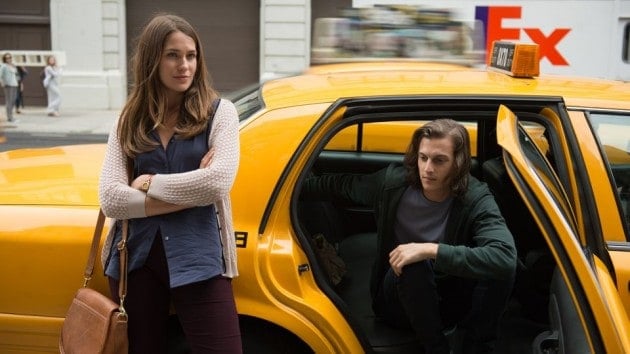 It may not feel like it, but “Silent Symphony” is a signifier of Mozart in the Jungle‘s creative growth, a half-hour that, like the previous two, is best when spent with Hailey day-drinking and lamenting the trajectory of her career. But there’s more to “Silent Symphony”, moments that push beyond the simplistic story beats found within the context of the episode. By continuing to build Rodrigo and Thomas, Mozart in the Jungle’s third half-hour feels like a dramedy slowly coming into tune.

There are still broad notes of “Silent Symphony” that aren’t very effective; while Jason Schwartzman’s cameo is welcome, it comes in the context of yet another “old successful man who can’t understand technology” scene. The moment Thomas leaves that interview, though, “Symphony” begins to find its footing with Thomas’s character, painting a picture of a man who just can’t let go of himself. He admonishes his own thirty-year-old quote, wears eye make-up in preparation for an interview, and continually tries to take credit for Rodrigo’s arrival; when Mozart shifts from a soapy drama about the arts, to a quirky comedy about identity, Mozart is a much more effective show.

This also comes in handy with Rodrigo, whose passion puts Hirsch from The Sopr – I mean, an elderly member of the symphony into the hospital during a rehearsal. Rodrigo remains unsatisfied with the sound of the orchestra, as he tells Cynthia, but the dissatisfaction spreads deeper within himself, a note “Symphony” captures perfectly with the mere mention of his ex-girlfriend (who we can only assume was ripped out of the picture he signed last week), and his conversation with a semi-inebriated Hailey, fresh off losing her job on the rock opera she had been working on (because the star flipped out on an audience member for recording it, a scene that makes for a very weird, ill-fitting cold open). In it, Rodrigo admits to being egotistic, but also displays his ability to be honest, telling Hailey that while she’s not ready, her honesty is her path to success (or at least, a job offer).

It’s that honesty with self that anchors the episode – and to this point, the series, which has floated between tones and genres through its first two episodes. Mozart is establishing itself as a series about two intersecting ideas: passion, and how it can cloud us from honesty. Thomas isn’t the most nuanced example of this, but his arc becomes more clear with each scene; his passion for the orchestra (and by proxy, for Cynthia) shields him from the fact that he hasn’t been a very good conductor or husband the last few years, failures that clearly motivate the anger and arrogance at the heart of McDowell’s performance. What initially appeared as elegance and brashness is revealed (through other characters, mostly) to be nothing but fear and desperation, an important note for the show to find in Thomas as it moves further and further into its Big Picture stories in season one.

Plus, “Silent Symphony” gives us a lot of material focused on Rodrigo and Hailey, which so far, has been nothing but great material, even when its relying on the superficial oddities of Rodrigo (he uses ladies’ bathrooms, allowing the show to hint at something between Rodrigo and Cynthia in the future), or focusing on short-lived plot twists like the trombonist who nearly bites it while he isn’t playing his instrument. In all, “Symphony” is an attempt to nail down a tone and some pathos for the show’s male characters – and while the show continues to struggle a little in making any of these stories feel wholly unique, it’s certainly on the right path.