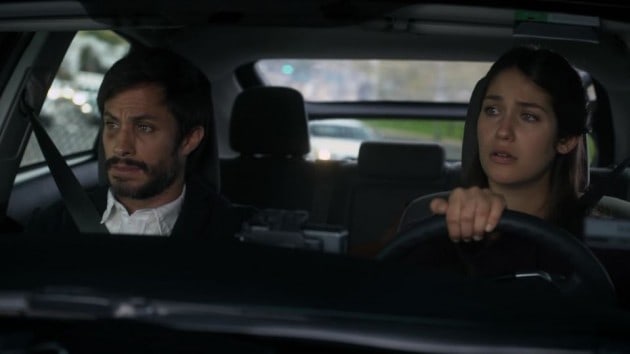 The conceit of “Now, Fortissimo!” relies on a big gamble; specifically, that the romantic aspects of the show are established enough to have heavy influence on plot. All season, Mozart in the Jungle has explored the idea of passion and how it fuels inspiration, if one is able to survive the frustration and confusion that comes along with it. “Now, Fortissimo!” is not just another weird Cynthia story and Rodrgio/Hailey road trip; it’s an attempt at marrying a lot of the show’s larger ideas together before the season finale to give everything a culminating effect.

Does it work? Unfortunately, it works better in small moments than it does as a whole. The problem is in the romance; while Mozart‘s ability to convey the romance of the symphony is unquestionable, it hasn’t done such a great job with the actual human romances on the show. Of the three depicted in this episode, Cynthia’s is the least effective; isolated from Thomas most of the season, Cynthia’s devolved into a drug-addled woman who, in this episode, sleeps with Bob the Piccolo Player after getting some strong drugs to deal with her arthritis. Not only does the story play off the idea that Bob’s a sad human being (which kind of sucks; he’s been a fun, if weightless, background character to this point), but I don’t know what it’s going for with Cynthia; is she reeling from her discovery of Thomas and/or the injury threatening her career? At this point, she feels overly sexualized, a character whose sexual personality is becoming a disturbing punchline, a mix of sad comedy and Drug Drama (see: Laurel, season two of Arrow) that doesn’t bode well for the character.

None of what Cynthia does in this episode conveys anything about her professional anxiety beyond anything but the superficial idea of that sleeping with someone while you’re drunk and stressed out is just something people do. It will clearly have implications for her at work; not only do the two not work on their upcoming negotiations (a story that Mozart’s constantly mentioned and glanced at, but never made something important), but now Bob’s developed feelings for Cynthia, which will lead us into predictable, awkward territory.

That stock story is the episode’s least effective; Rodrigo and Ana Maria’s at least benefits from the performances of the two leads in their shared scenes together. Where previous exposition has failed the show, quiet physical performance succeeds; the way Rodrigo and Ana Maria look at each other, it sells the idea of their love for each other better than the stilted dialogue about the “first time they made love.” And out of context, the entire scene is a bit silly – and honestly, Rodrigo making his ex-wife play the song they first made love to on the biggest night of his career seems ripped out of a bad indie rom-com Zach Braff or Josh Radnor might direct – but in the moment, pressed in between their weird relationship and conversations, was a physical performance that sold the relationship better than anything else the show’s tried to do.

However, that moment is the exception in “Now, Fortissimo!”; Hailey’s such a secondary character in this episode, her decision to jump Alex in the closing moments is less interesting than it was an “oh, of course this happened” kind of thing. And as the show heads into its finale, it doesn’t feel like all the pieces are in place for what it has built to; Opening Night awaits (after all, it is the title of the season finale), which will require a serious acceleration of every story the show appears to have running at the moment – except Hailey’s training with Betty, which is quickly becoming a hilarious caricature of training montages from countless martial arts films. “Now, Fortissimo!” certainly has moments here and there that work – like the completely out-of-left-field dying toxic waste plant worker, along with Ana and Rodrigo looking into each other’s eyes – but these moments never coalesce into a symbiotic, meaningful whole (Lizzie’s rich!!!… wait, what?).