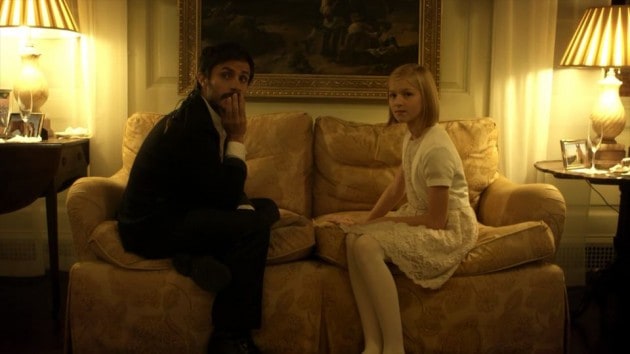 Coming off the baroque performance in last week’s climatic scene, “You Go To My Head” rides the literal high from “The Rehearsal” into another stellar episode about inspiration, and the yin-and-yang of making something so expressive and creative, something so professional and rigid. A mix of heaven and hell, of the endearing and the odd, “You Go to My Head” is the pinnacle of Mozart in the Jungle‘s philosophies on life and music.

Most interestingly is how this episode doesn’t spend a single second at the symphony; from beginning to end, director Roman Coppola pushes us farther and farther into the alternate reality of this high-rate fundraiser; so far, in fact, that it eventually features a white horse eating cake through a doorway in the middle of the house. These visual gags, however, don’t undercut the emotional power of what happens in the scenes around it; as always, Rodrigo and Hailey provide terrific anchors for the show’s musings about music and life, the two having equally revelatory experiences during said party.

Of course, with a guest appearance from John Hodgman, it’s no surprise Hailey’s is the most effective of the two; Hailey and Warren’s conversation about Hailey “inventing” herself as a musician is a fascinating vehicle for self-reflection, both for the characters on the show, and us in real life (something truly great television often does); how do we become the people we are? What happens when we lose the inspiration that drove us for so many years, or realize our definition of self was constructed on a false truth? These are the questions many characters find themselves dealing with; pain-addled Cynthia, an uninspired Rodrigo… even Lizzie, who ends up at the same party because she has a hidden past as a rich kid who knew the right people.

As director Roman Coppola pushes us farther and farther into the twisted reality of “You Got To My Head” (complete with gorgeous, lengthy shots filled with physical movement, or lingering on the juxtaposition of two characters), the more reflective Rodrigo and Hailey become. There are elements in their world pushing them toward this, of course, but it comes with a breakdown of what’s assumed to be normal; a horse eating in the house, a rich man dining a young woman for non-sexual reasons, a short-lived moment where musicians win out over the businessman paying them for their entertainment (be it with emasculating displays of intelligence, or just stealing some caviar). Rodrigo’s little assignment at the beginning of the episode really speaks to a number of characters, including Hailey: it’s only through new experience that we can resolve lingering conflicts, and only through discovery of self that we can find inspiration, as Rodrigo finds with his “little blonde angel”, who reminds him that finishing a piece of music is like “waking up from a dream” (the equivalent of Rodrigo’s broken nose from his foolish attempt at a chilena).

“You Go To My Head” is an episode with a simple message, conveyed in a visually rich, emotionally resonant way; and though it pushes aside most of the season’s bigger stories to do so (I’m not complaining too much about the lack of Alex; I’ll take Lizzie’s singing over it any day), it delivers some of the show’s best material yet. Putting its bigger stories on the back burner turns out to be a boon for Mozart in the Jungle‘s character building in a wonderful, slightly ethereal half hour of television.