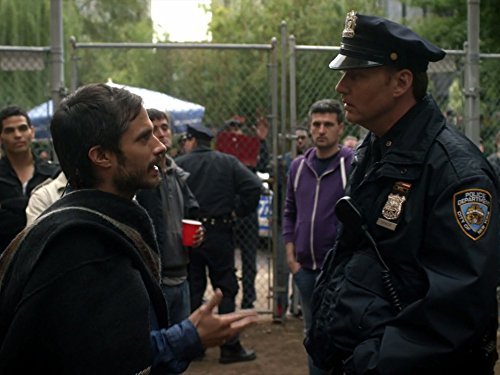 Even on shows focused squarely on character, like Mozart in the Jungle, need a little conflict here and there. So far, most of those have been predictable; girl struggles for dream job, genius composer loses touch, old man gets grumpy about being old, etc, etc. For the first time, “The Rehearsal” reaches a little further, a little deeper – and because of it, is a much improved piece of television, splitting its focus on Rodrigo and Gloria in the most rewarding half hour of the series yet.

Anchored by the fantastic (and fantastical) performance in the abandoned apartment yard, “The Rehearsal” brings two important conflicts into focus, one internal, and one external. Both have been hinted at before, and it’s debatable whether Rodrigo’s internal search for harmony isn’t better served in other episodes; regardless, his breakthrough pairs beautifully with Gloria’s struggles to keep the orchestra afloat (the external plot), again examining the fine line between passion and profession, and how the two are always in conflict with one another.

And with its focus on Gloria and Rodrigo, Bernadette Peters and Gael Garcia Bernal are given lots of room for expression, which both performers grasp with gusto. There’s nothing like when the energy a script is trying to achieve through plot seeps through in performance, and both actors are on point with their respective portrayals, Peters giving lots of life to the conflicted orchestra director, and Bernal continuing to deliver a quirky, earthy performance as Rodrigo (plus when he yells “Jai-lai!” I can’t help but laugh). Their scene at the end is really the highlight of the episode, much subtler than its louder, equally as resonant performance scene; Rodrigo’s sly smile and Gloria’s furrowed brow are tell-tale signs of the dissonance existing at the center of the orchestra – though as any musician will tell you, great dissonance is a beautiful harmony all into itself.

Wherever Mozart in the Jungle heads from here, “The Rehearsal” gives it a strong foundation; even little things like Hailey’s interactions with her oboe student (who is paying her out of his own pocket, with rare coins) feel alive, even when they’re playing to the cliched sensibilities of Hailey’s plot. As much as I enjoy the direction in her scene with Alex, it doesn’t go beyond the obvious into anything interesting. Where Rodrigo and Gloria’s stories come alive because they push them in surprising new directions with their conflicts (Rodrigo brings back the 1812 overture he rejected, and Gloria’s happy facade comes crashing down) and reveal new layers of their character. Hailey’s dedication to her career isn’t new – the only real new piece here is Alex’s extreme disappointment when she turns him down, something the episode seemingly has no interest in expanding upon, at least within the half hour of this episode.

Again, Mozart in the Jungle returns to its themes of harmony; the harmony between the streets and musicians that’s often challenged by police. A professional success that ends up in personal shortcoming. Gloria’s attempts to keep everything running smoothly, and everyone happy. Every single story line in Mozart in the Jungle is about fine-tuning, be it the sound of an orchestra or the focus of one’s passion; and “The Rehearsal” captures that conflict in a bottle, and delivers it in an entertaining, occasionally odd-fitting (like the sudden physical comedy of Hailey getting stuck on a fence; how out of place did that feel?!) half hour of television. As Rodrigo says, they’re onto something here – and for the first time, it feels like the show itself is reaching towards something, some place, just like the fictional orchestra it portrays.