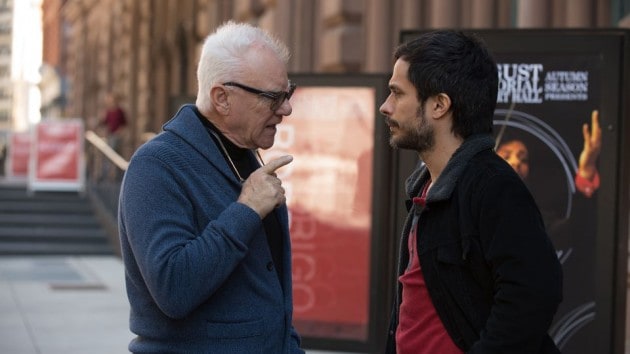 With an opening scene depicting Mozart slapping Rodrigo in the face with sheet music, “You Have Insulted Tchaikovsky” quickly establishes itself as the most interesting, quirky episode of Mozart in the Jungle yet, the first half hour of the show that lets the personalities of its performances seep into the show’s construction. We’ve seen hints of it through Rodrigo before, but “Tchaikovsky” goes balls to the wall with the weird ticks – and is all the better for it, feeling like a show that’s really finding its rhythm, like Rodrigo and Hailey traveling over the bridge in a limo to Gloria’s fundraiser.

Yes, a man in a wig slapping Rodrigo in the face is kind of cheesy; but it’s really exactly what Mozart needed, pushing its supposed star conductor into an interesting inner conflict. Since coming to the symphony, Rodrigo’s struggled to feel the music he wants to put into his program, even putting one of his elderly members in the hospital with his passionate attempts to feel the music in his soul. And who could blame him; one of the most effective things Mozart in the Jungle has conveyed early on is the (also cheesy) idea of the musical genius who can hear music in anything. Sure, it’s easy to do that with beautiful strings and the carefully-edited crescendos of woodwinds – but it also works on a character level, giving us a taste of the bliss Rodrigo’s searching for in the music.

Of course, it seems his musical block is coming from some ex-lover drama, something I’m not really anticipating in Mozart‘s near future (in this episode, he receives a cryptic, weird drawing from Ana Maria) – and while we’re at it, I’m not really looking forward to the sudden drug addiction Cynthia’s dealing with (a musician with a drug problem? How novel!). What I am looking for in Mozart is more weirdness, like Gloria telling Sharon to move so she can awkwardly back out of Rodrigo’s ‘office’ -or just more Sharon, who remains the show’s funniest character, if only because she’s completely trampled on by everyone else around her (and continuously expresses frustration with it, like a more vocal Zhu Li from The Legend of Korra‘s earlier seasons). As “Tchaikovsky” continuously points out, there are plenty of fun, passionate characters to follow around – and for the first time, it feels like the show is truly embracing them.

There are still problematic pockets, however; Thomas and Cynthia are both drags in the episode, though Thomas pitching an expensive fit finally catalyzes a new line of thought behind the writing of the character. It pushes him into a new phase, which the show eloquently does with him providing advice to a mortified Rodrigo; for the first time, Mozart allowed Thomas to operate as a disgruntled mentor rather than a bitter has-been, giving life to the end of the episode that Thomas’s last few appearances haven’t had (even with a predictably quirky Jason Schwartzman cameo in one of them).

Also: why does Cynthia need a drug addiction? Drugs and regrets are the all-time cliches of drama focused on aging artists, and in an episode that’s so willing to try and examine characters from new angles, the traditional stories attached to two of the show’s strongest performers is disappointing, to say the least. Thomas’s final speech at least gives the character a direction; for lack of a better word, Cynthia’s flailing feels like flailing, especially when it’s given no context outside a sext to Thomas that his wife finds and her shooting up something in the bathroom.

However, “You Have Insulted Tchaikovsky” is a step forward for Mozart in the Jungle, pushing away from the stock approach to storytelling to reveal something a little more artistic and off-center, a bit of personality that I welcome to the show with open arms. If Mozart in the Jungle can continue down this surrealist path, while still staying grounded in the internal conflicts facing characters, it may have something special on its hands, even if that adds up to a bunch of scenes with Hailey listening to tapes of Rodrigo telling her to do odd things.