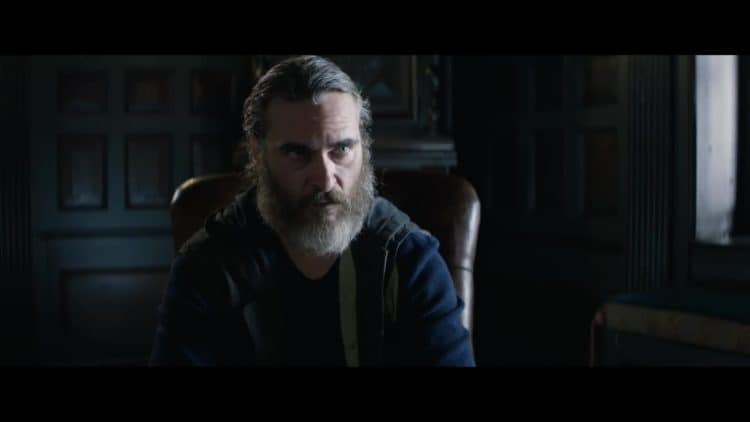 Take it as you will, but Joaquin Phoenix apparently has an affinity for characters that have suffered a great deal of trauma in their past and desperately need an outlet of some sort. These characters are also troubled, have a continued relationship with their mother that’s not entirely healthy but can go one way or another, and are capable of snapping at some point if they’re not careful. In all fairness, Joe is a decent guy that’s trying to make the world a better place in his own way since going after child traffickers is a lot more positive than Phoenix was as Arthur Fleck, who was beaten up, walked over, and essentially thrust into a life that would turn him toward a violent path. But Joe is capable of great violence, even if he’s beating others down for a good reason. But his methods of beating those who would abuse children to a pulp does kind of hint at the trauma that the flashbacks in this movie hint at since there’s a lot of anger there that needs to be let out.

As the movie starts up the audience is given at Joe as he’s leaving a job, and shortly after it’s seen that as he’s entering his home that he’s seen by someone that he happens to recognize, which is a big no-no in his line of work, as he doesn’t need anyone knowing where he lives. As a result, he ends up telling his handler that they’ll need to use another source since as someone that operates under the radar, Joe can’t let just anyone know where he lives. This is especially true as he takes care of his elderly mother, who doesn’t appear to be all there at certain moments. The idea the JOe is ex-military adds to the threat that he presents to those he’s aimed at since he not only knows how to fight, he also knows how to get into a space and then fade away when he needs to.

The next job however has him seeking to free a senator’s daughter from a brothel where young girls are kept to service high-end clients. The sensibilities of many people are bound to be tested in a movie such as this, as even the implication of such an act is enough to greatly offend many people and sicken several. When Joe seeks out the young girl that he’s there to find he shows that he’s just as brutal and efficient as ever as he goes about freeing one girl and hammering the life from one offender after another. When he finds the daughter of the senator that hired him, Joe finds that she’s not quite as responsive as he needs her to be. Hoisting her on his back, Joe makes his way through the brothel, only pausing to deliver another beatdown on the way out. Those that haven’t watched a lot of thrillers might think that this would mean a bit of downtime was coming soon, but in a psychological thriller, it’s pretty typical that when one thinks that there’s a moment of peace coming it really means that there’s something uniquely messed-up coming, and this movie doesn’t disappoint.

Once Joe has the young girl, whose name is Nina, safe and secure in a hotel room, where they’re waiting for her father to arrive, they learn from a newscast that Nina’s father committed suicide, and only a few moments later there’s a knock at the hotel door. The plot begins to thicken as the police shoot the desk clerk of the hotel before abducting Nina and threatening to kill Joe. When Joe deals with the cop left behind to watch him it’s assumed that he might go on the warpath, but this movie throws another twist into the mix as Joe finds his handler, his source, and his mother all dead at the hands of corrupt agents. After killing the two agents at his home, Joe gives his mother a water burial and nearly kills himself, but ends up surfacing again to go after Nina. Finding out that another senator has taken her, as she’s his favorite, Joe goes to find the senator in his country home, where he prepares to do what he does.

The twist is that he’s been beaten to the punch since he finds the senator already dead, as his throat has been slit. Joe looks as though he’s in the middle of a mental breakdown before he stands to his feet, making his way through the mansion before finding Nina sitting at the dining room table, a bloodied straight razor nearby as the audience can see that her hands are stained red. This movie builds itself up a bit but ends up delivering a few very interesting twists and turns that people might not have expected. All in all, it’s not a bad movie, but it does need to be watched in its entirety to know what’s going on.