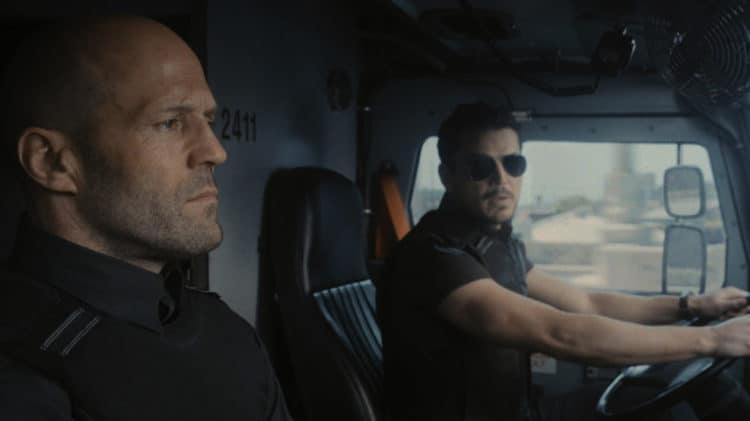 On one hand, Wrath of Man looks like a way to make driving an armored car look like something that only attracts some of the toughest and most badass guys around, but on the other hand, if one takes note of the crews that are working the trucks, there are only a few macho individuals that are all muscle and looks, and at least a couple of them are made to play characters that are less than impressive. But the movie does have an impressive cast of characters that don’t appear to get the kind of attention that they used to. This is the kind of movie that has served as Jason Statham’s bread and butter for years though since it gives him leave to be a tough guy that doesn’t say much and is meant to be as intimidating as possible. There are moments in which it becomes obvious that his character is going through the motions to get the result that he wants, but when he runs riot on those that he’s after, it becomes a scorched-earth moment that makes it clear that he’s not messing around.

Interestingly enough, H, as Statham’s character is called, is not the main focus of the beginning of this movie, as the different points of view that are seen from the start to the end feature begin with an armored car that’s stopped by a road construction crew. Only a moment later though the armored truck guards are yanked out of the truck and executed only a short while later. After that, the story moves on to H’s first day on the job. His test scores are just good enough to allow him to pass, but his attitude is that of a man that has seen it, done it, and isn’t impressed. His first job ends up going fine, and as his fellow guards invite him out for a bonding experience it’s established that he’s been brought on to take someone else’s job, which might have been a problem if the guards hadn’t accepted H from the start.

As things move forward, H is given his first test when a group of masked robbers attempts to take the money from the truck, as it’s established before this that they’ve taken the guard who goes by the name Bullet, played by Holt McCallany, and are threatening his life if they don’t get the money. H persuades the driver, nicknamed Boy Sweat, to help Bullet and then proceeds to toss several bags of money in a truck that’s been backed up to the money truck. When he tosses a bag wide, forcing the driver of the truck to step out and retrieve it, he then shows unerring aim as he shoots and kills the robbers and chases down the last of them before questioning him about the robbery that was perpetrated by the fake road crew. When the robber refuses to talk, H executes him. From that point on, H can do no wrong in the eyes of the company’s CEO. After another robbery is foiled by H however, it’s established that the other guards are now wary of H, as there appears to be something off about him.

When the truth is revealed that H is a crime lord by the name of Mason Hargreaves, things start to fall into place as it’s revealed that during the heist pulled off by the fake road crew, who are revealed to be military veterans that need a big payday, Mason’s son, Dougie was killed. After Dougie’s death, Mason’s wife leaves him, and he begins to hunt for the robbers and is being given leave to do so by the FBI. After being given a list of thieves that might be responsible for the heist, Mason and his crew wipe out the various names on the list in their search for the robbers, but it’s only when Bullet reveals that he’s the inside man that’s going to help the veterans rob the depot on Black Friday. He makes it clear that H can get in on it, so long as he doesn’t cause any problems. Of course, once things start to go bad, as they were bound to do, the robbers start to drop as they kill the majority of the guards in the depot before only three of them, Bullet included, manage to escape with the money.

When one of the robbers kills the remaining two and takes off with the money, Mason eventually finds him and executes the man by shooting him in every organ that his son was shot in, exacting his revenge as he leaves the money. When compared to Statham’s other movies this one feels rather solid since as a revenge story it felt heavy-handed in a way that was well-deserved and didn’t end up going wide of the mark that had been set.