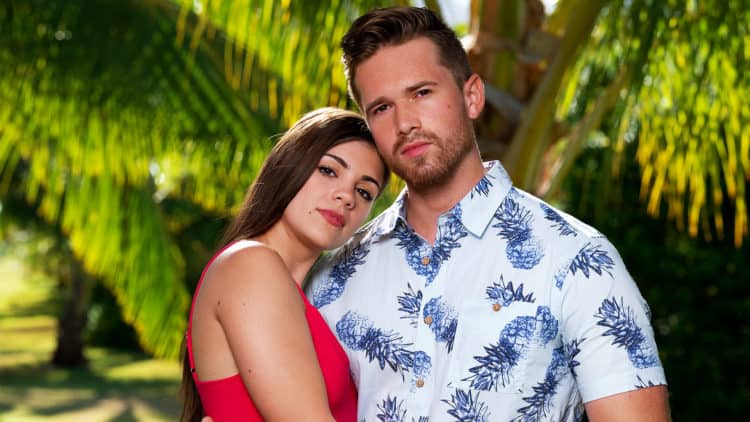 It’s back…. the reality TV show that puts relationships to the ultimate test is back on our screens for a second helping. Season 2 of USA Network’s Temptation Island promises to be even hotter and heavier than season one, bringing us 24 sexy new singletons and 4 brand new couples determined to salvage their rocky relationships and explore just how much temptation they can resist. The premise of the show is simple: take four couples at a turning point in their relationship, pack them off to Hawaii, and install the guys in a house with 12 attractive single young women, and the girls in a house with a dozen equally attractive, equally single young men. For the next 30 days, the couples are kept strictly apart, with no contact with their other half, and no info on their activities other than the short video clips they’re shown at the end of each week. Instead, they keep themselves amused by going on dates with the singles of their choice, a set up designed to test just how committed they are to their significant other, and just how far temptation will lead them. At the end of the month, they’re given a choice: leave the island with their original partner, single, or (in a major twist on season 1) with someone else entirely. Which couples will prove they’re united in love, or better apart? Whatever the answer, our October’s viewing is sorted… get ahead of the game with a glimpse at the four new couples ready to test their love in front of the nation.

Ashley Howland & Casey Starkchak met just over a year ago through a dating app and are keen to test just how far they’ve come in the commitment stakes since then. When they first started dating, party-loving Casey was determined to keep things casual, but soon fell hook, line, and sinker for the charms of 25-year-old Ashley. Since taking the next step in the relationship by moving in together, a few dark clouds have started to gather as Ashley struggles to move past Casey’s former party-loving ways and Casey tires of being tarnished with the same brush as Ashley’s former boyfriends. “Temptation Island is definitely something that we need at this point,” says Casey, with Ashley adding: “We’ve definitely set rules for each other – no kissing, no sex, none of that. We’re here to work on our relationship, not try to ruin it.” Can they weather the storm and stay together, or will Casey’s nostalgia for the single life pull them apart?

Model Rick Fleur and store manager Ashley Goldson have been together for four long years, and have always managed to weather the usual up and downs of a long term relationship… until now. After a tough childhood, Rick wants to cut free and live life to the full, even if that sometimes means doing things Ashely wishes he wouldn’t. Rick’s roving eye and flirty behavior with other women have already started to make Ashley question just how committed the man she thought was her soul mate really is… will the temptations of the Island be the final nail in the coffin for the relationship, or will it help them re-find their way? “I just wanna know that we are in this serious relationship and that he’s faithful to me and wants to explore the next steps – perhaps some babies and a ring,” Ashley says, with Rick adding the ominous reply, “Or we go our separate ways.”

Once rivals in business, sales executives Kate Griffith & David Benavidez discovered their competitive sparring hid a romantic spark three years ago. Since then, they’ve been inseparable, but recently, their pasts have started to catch up with them in a way that spells trouble for the future. Despite each insisting they’ve been faithful to the other since they got together, their history of unfaithfulness (Kate had an affair while married to her ex-husband while David cheated on a former girlfriend) has raised doubts in each other minds about the other’s true commitment. The 6-year age gap has also started to test the relationship: while 34-year-old Kate’s biological clock is ticking, 28-year-old David isn’t sure if he’s quite ready to settle down and start a family. Will the island prove their commitment, or will it drive an even bigger wedge between them? “I need to learn to trust a little bit more and have more self-confidence, and he needs to open up more,” Kate has said, while David has added, “I don’t want her to think that I’m some totally different guy when I’m not in front of her. I want this relationship to work.” Whether it does or doesn’t, we’re guaranteed to be in for serious drama with these two.

After 1 and a half years of dating, leasing executive Esonica Veira is ready to take the next step in the relationship… at 4 years her junior, meanwhile, private security consultant Gavin Rocker is not sure whether he’s ready to commit to one woman for life. “My biggest hope is just to get clarity and a deeper understanding of our relationship and where we stand – and then to continue to connect and grow, or just accept the fate,” Esonica has said. “Whatever that fate is,” Gavin has added. With a history of infidelity, will Gavin’s wandering eye prove the final straw for the couple, or will the island’s temptations only strengthen their bond?

Only time will tell which couples manage to resist temptation and leave the island together, and which will leave apart… place your best bets now.