Home
Television
How Close is “Masters of the Air” to being Made? 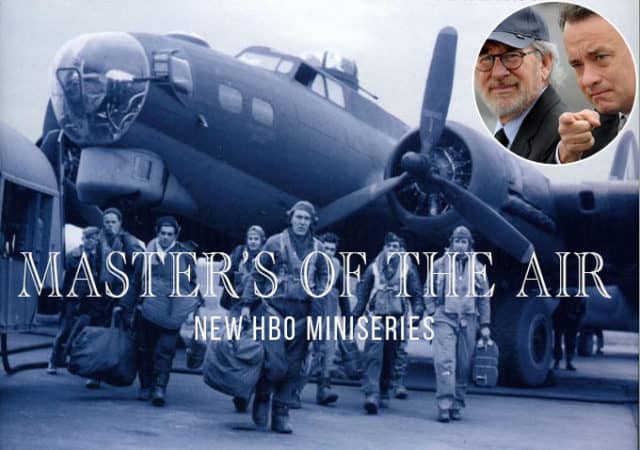 Masters of the Air is a book that focused on the American Eighth Air Force, which carried out bombing campaigns for the purpose of breaking the Nazi warmachine. Suffice to say that their task involved a great deal of risk, not least because the revolutionary way that World War 2 was fought meant that there was a great deal of learning on the job. Considering that war tends to be a hazardous business even under the best of circumstances, it should come as no surprise to learn that the American Eighth Air Force had to overcome a wide range of challenges in the course of carrying out its mission.

As a result, the American Eighth Air Force was an excellent choice for the third World War 2 collaboration between Tom Hanks and Steven Spielberg. For those who are unfamiliar with those collaborations, the first was Band of Brothers, while the second was The Pacific. Given the success of those two series, it stands to reason that the upcoming Masters of the Air mini-series will be well-supported, as shown by the fact that it is expected to receive a budget of $500 million.

What Is the Latest News on the HBO Series Based on Masters of the Air?

Unfortunately, there hasn’t been a great deal of news released about the Masters of the Air mini-series in recent times. There has been a fair amount of information released so far, but the problem is that most of that information lacks sources that interested individuals can use to find out more. Still, that doesn’t mean that Masters of the Air isn’t going to be made, just that there isn’t a clear indication of when production will start up on the mini-series.

Some of the delay is rather understandable. After all, the Masters of the Air mini-series will be a collaboration between Tom Hanks and Steven Spielberg, who are two of the busiest figures in Hollywood. As a result, it seems reasonable that it would take some time for their schedules to sync up well enough for them to get this project done. Of course, the problem is that for the public, there is no real way of telling when that might be.

As for the more relevant issue of when the Masters of the Air series will actually get made, the answer is that it is unclear at this point in time. There is at least one source on War History Online that has claimed that interested individuals can expect it to come out in 2019, but there is a serious issue in that the source doesn’t actually mention any reason for interested individuals to believe the claim. Never mind that it is unclear who that source might be, which is important for people who are interested in figuring out how much they should believe him if at all. Even worse, there are some sources that have presented conflict information, as shown by articles from 2013 suggesting that filming had started as well as more recent articles suggesting that the people behind the mini-series are still scouting locations. Summed up, there is no real way to tell when the Masters of the Air mini-series will be completed, but considering the lack of news, it seems safe to say that it will take some time before that happens.