Home
Television
Off the Map
Off the Map 1.04 “On the Mean Streets of San Miguel” Review 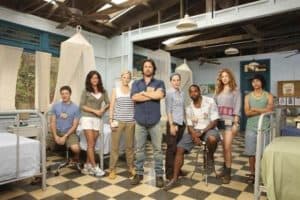 Well, I guess it’s safe to say that ‘On the Mean Streets of San Miguel’revealed a boat load of information about pretty much all of the characters. Last week I was still on the fence about keeping or canceling Off the Map, but right now they have managed to sway me slightly to the keeping side of the balance.

In an episode that was chock full of little tidbits about the veteran and newbie doctors of the Clinica, Off the Map is slowly, but surely catching my attention. There were three main plots with each of the newbies doing their work with one of the vets and they served to give us a glimpse to who these people really are and what makes them tick.

Lily went to San Miguel with her crush Dr. Keeton to get medicine that was being held in Customs and we found out that Keeton’s wife is actually alive, contrary to what we were led to believe for the past three episodes. She was shot five years ago and has been kept alive by a machine since then because she has a very nice trust fund that Keeton is using to support the clinic. He tells Lily that he is not the perfect guy she may have thought he was and that was why.

Lily, in turn, ended up throwing her rule book out the window and ended up bribing the guy at Customs — even threatening him, which was pretty cool — and ended her night drinking in a bar with a stranger named Matteo. I actually loved to see her like this because the whole miss goody two shoes act was getting old really fast. It was great to see her letting her hair down for a little while.

Mina treated a terminal cancer patient that turned out to be a Nazi. He had been hiding in South America for 60 years and when Mina found out about that, she told Ryan and Cole that she was not going to let him die; that he should be punished for what he did. It was a pretty interesting storyline and we got to understand a little bit more about her. She went to South America to punish herself after she killed a kid. Back home, her father pulled some strings and her record was clean, but she couldn’t live with that. If they weren’t going to punish her, than she was going to punish herself. It made her just a tiny little bit more likable in my eyes. I am still not her fan, but she is in the right track.

I still don’t care about Tommy. He just annoys me.

Ryan and Dr. Alvarez are both frustrated with their relationships so they took it out on the jungle. I feel so bad for those poor banana trees.

And the one last bomb they threw at us was that Dr. Cole was once upon a time a drug addict. He spent the entire episode complaining about his wisdom tooth and everyone assumed it was because he was afraid of going to the dentist. What really scared him, though, was the fact that he would have to get drugged up so the dentist could pull his tooth out and he was afraid of relapsing.

It was great seeing these characters finally getting some depth and back stories. was a pretty decent episode. Off the Map is still not a great show in my book, but it is doing its job. It has keptme interested so far.