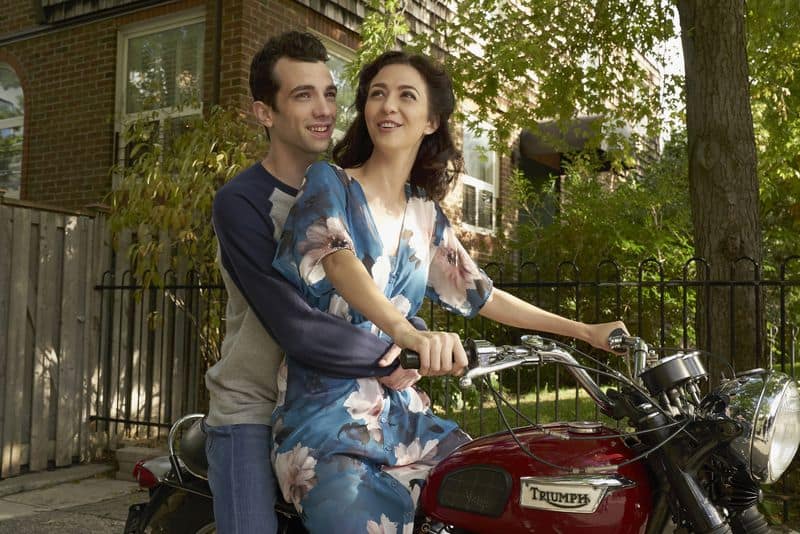 Throughout the third season of Man Seeking Woman, the show continues to utilize it’s initial premise but adapts it to explore the struggle and speed bumps Josh faces in a serious relationship. It’s been a super refreshing change thus far and has allowed the show to explore relevant topics with fun moments. Yet, with subtle surprise, this week’s “Pad Thai” announces that Josh and Lucy have officially been together for a year, which is a really big deal. In the past, Josh has always gotten in his own way and killed some promising relationships and so far with Lucy, it seems like the real deal. Every situation that the couple has faced, they’ve been able to calmly talk out and work through, but “Pad Thai,” explores how people deal with feeling bored and resisting something that seems more exciting at face value.

“Pad Thai,” is an episode that is primarily focused on Lucy, which is a nice change up from the past two episodes that have been a mixture of being about Josh and stories centered around the couple dong something together. This episode displays the challenge of a couple facing the one year mark and a full transition into a serious long-term couple. The exciting and adventurous Josh and Lucy have been replaced with a couple who has been content with spending all of their time together ordering delivery and binge watching TV shows. It’s a very natural situation to see; couples becoming content with their significant other and not feeling the need to do as much. However, there comes a point when one or both people in the relationship will begin to miss going out, grabbing drinks and just being social.

For Man Seeking Woman, Lucy’s friends come around expressing how going out isn’t the same without her. She immediately recognizes what she’s given up and wants to return to that lifestyle instead of sitting around for even more documentaries. The show does a nice job with Lucy’s return to the game by giving her a very Ocean’s 11 planning montage, but the scene really does explain what it feels like to reunite with a group of people you were closest with. Lucy has missed this part of her life more than she initially knew, so she wants to make the most of it.

Of course Josh is somewhat uncomfortable with her choice to go out because it shakes up the normal routine that he is still complacent with. There’s nothing that either of them can really do about the situation at first because they don’t want to create an unnecessary and massive conflict; Josh is cool with Lucy going out because he knows she can do what she wants, and Lucy doesn’t want to make a big deal out of being unhappy with their current routine. It’s nice that neither of them seems to want to make the other one worry, but “Pad Thai” gets a lot more interesting when Lucy, literally, bumps into a very good looking guy at the bar.

Relationships are built on trust, and the goal is to find someone that you can trust with your life. While it’s always best to be up front with people, there are certain situations that might be better to leave untouched because ignorant bliss can be better than the raw truth. In this scenario, Man Seeking Woman does just that but also uses the plot and idea to show how seemingly scary events like the one Lucy faces, can possibly end being beneficial for the relationship. The suave, good looking adventurer she meets obviously catches her interests and attention; this guy represents everything that she feels is lacking in her relationship with Josh. It’s not that Lucy necessarily does anything wrong, but it is concerning to see her seemingly questioning what she has with Josh for other options.

When Lucy gets through her day of semi-adventuring with Owen, she is intrigued by following through with running off with him for what might turn into a more exciting lifestyle. Yet, Man Seeking Woman boldly has her ask Josh for his opinion without him knowing it, and he provides the exact answer she’s looking for. Relationships aren’t fully glamorous or always the most exciting thing out there, but that’s not why people get into them. Josh and Lucy have something real and something special, and through his answer Josh lets Lucy know that he fully supports her striving to go for the things she wants in life. This makes her decision a no-brainer for her because she recognizes that Josh is willing to adapt and balance their lifestyle for her; if she is up front with him he will respect her needs. Lucy never actually wants Owen, she just wants a portion of her lifestyle to remain fun and exciting like his is all the time; Josh is the guy she wants, and as long as he’s willing to offer some give and take, Lucy isn’t going anywhere.

* Really happy to see the show giving Katie Findlay so much screen time and story presence. She’s been a great addition and does well with the leading role when she’s given it.

* Man Seeking Woman continues to have the best analogies for situations ever. The Indiana Jones and Ocean’s 11 connections were amazing.

* Josh coming in with that clutch mummy impersonation at the end of the episode.