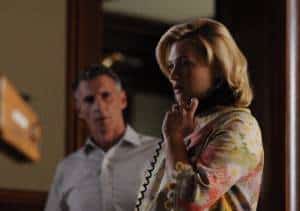 One of the big season 5 Mad Men questions was how they were going to deal with January Jones’ real life pregnancy and because Betty didn’t feature in the 2-hour season premiere last week this question went unanswered.

There are three creative options for handling a real life pregnancy; you can make the character pregnant, you can use well placed objects and counter tops to pretend that nothing is different or you can make the character fat. Mad Men has decided to go for the last option which makes something that looks funny for one moment into a tragic story and turns an unsympathetic character into one you can feel something for.

Betty has always been a problematic character in terms of structure as she exists outside of the main setting of the ad agency and last season this became more so as she had divorced the one anchor she had to this world. This issue still exists this season, but Betty’s health scare leads to this brief moment of being back in Don’s (Jon Hamm) sphere of acknowledgement. It also shows why Henry (Christopher Stanley) feels inferior to Don, even if Henry is the Don replacement as Betty calls Don when she is in a panic as she knows he will say the right thing. Though Don is left to consider what life will be like for his kids without a mother for longer than he needs to; Don is the first person that Betty rings in a crisis but in her relief she neglects to let him know that everything is fine.

Seeing Betty’s dramatic weight gain is rather jarring and this looks like the nightmare that Betty always feared. Betty has shared stories from her childhood that show her mother was obsessed with her figure and in previous seasons Betty has always been a character that has eaten little on screen. Even though her weight gain is in part due to her thyroid, it could also be as the doctor suggested psychological. The house she now lives in is opulent but old-fashioned and is in stark contrast to Don and Megan’s (Jessica ParÃ©) modern apartment. Betty now also has an over bearing mother-in-law to contend with, something that was never an issue with Don of course. Betty has never seemed overly happy, but even with this lifeline she has been given is anything going to change?

One major concern is Sally (Kiernan Shipka) who was already incredibly unhappy with her living situation last season and it was rather telling that she left half her ice cream, just for Betty to finish it. When Don tells the Rolling Stones groupie that “we’re worried about you” as a generation he really should be counting his own daughter in this.

While we never find out how old Bonnie, the Rolling Stones groupie is we know that she is young and Don uses the opportunity to do some market research on why she wants to meet the Rolling Stones so badly. Don might not understand why this generation wants to sleep with rock stars so badly and sticks out in his suit and tie, but this shows that Don is always working to find an angle and a market to sell to. 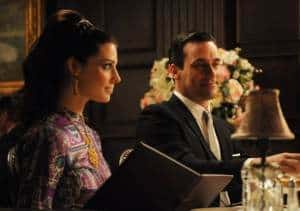 The power dynamic between Don and Megan still continues to shift and this Mrs Draper can play the dutiful wife at dinner, but also stand up to her husband when he is wallowing. Megan might not understand why Don can go to a Rolling Stones concert one night for work and then not feel up for socializing the next day on the beach. From Megan’s sunburnt skin it looks like they did make it to Fire Island after all. There is also change in how Don does not seem bothered by Megan’s shorts and

bikini top combo, when a few seasons ago Don went ballistic at Betty for wanting to wear a two-piece in public.

The generation gap is being felt at SCDP as Roger (John Slattery) continues to wonder what his value to the company is after Pete (Vincent Kartheiser) appeared to offer a truce in their power struggle by giving him the Mohawk account. Pete unveils the account in front of the whole office and disrespects Roger in the process; which on one hand is a rather cruel move to prove his superiority but one that Roger deserves thanks to his lack of actual authority now. Roger asks “When is everything going to get back to normal?” but that time has passed for him and it will be intriguing to see where Roger can go from here; will he fight for his job or continue on the path he has set for himself?

Peggy (Elisabeth Moss) is in a difficult position with her career as thanks to her gender there only seems like a certain amount that she can achieve; she won’t get the new Mohawk account but she can hire the guy who does. The one candidate she does choose is cocky and difficult but has a real talent; Michael Ginsberg (Ben Feldman) also has the ability to turn on the charm in front of Don which helps him get the job. Is Peggy going to regret picking the guy with the best book if he becomes the new SCDP creative star?

-It was a somewhat cruel cut between Betty having her children attempt and fail at zipping up her dress to Don doing the same with Megan with no trouble at all. Betty was the one with the glamorous clothes and figure and now that mantle has been passed to the new, younger Mrs Draper.

-Betty still refers to Megan as Don’s girlfriend and tells her friend that Megan is 20; Megan is actually 26 as we are reminded later.

-This episode is Jon Hamm’s directorial debut and he did a good job; cutting from Megan and Don discussing Betty’s situation to the Francis family in the garden with the kids running around with sparklers is a favorite visual moment.

-Harry (Rich Sommer) continues to be an unbearable ass and this is evident in how Don interacts with him. These moments do provide some of the comedy of the episode, especially when a stoned Harry eats 20 mini burgers that Don assumed were for Harry’s family. 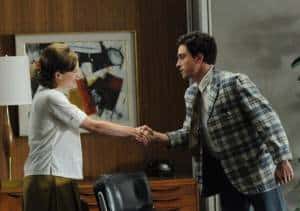 -Roger has an interesting reaction to the Michael Ginsberg; “Turns out we both have a dream of throwing something through this window.”

-After the end of last week’s episode they did indeed hire an African-American secretary and Roger has some thoughts on this too, playing on her name Dawn and being offensive in the process “It’s always darkest before the dawn over there.”

-Did Henry make a reference to Mitt Romney’s father George who was Michigan Governor between 1963 and 1969?

-A ‘psychic’ suggests that Betty’s tea leaves say that ‘she’s a rock’ and has a ‘great soul’. This is not necessarily something you would expect to hear about Betty and her tears after would suggest that this ‘psychic’ isn’t the best at reading people.

What did you think about this week’s Mad Men? Were you glad to see Betty? Did this story make you sympathize with Betty or did you want more SCDP time instead? Let us know your thoughts in the comments below. 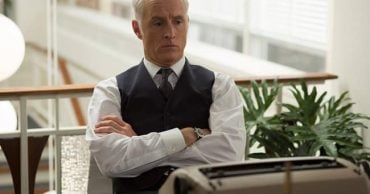 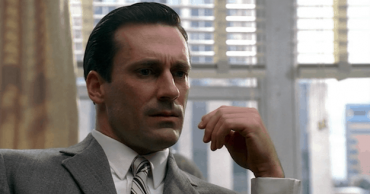 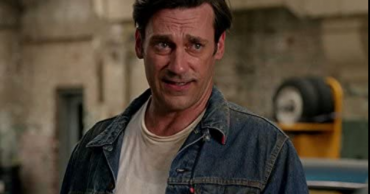 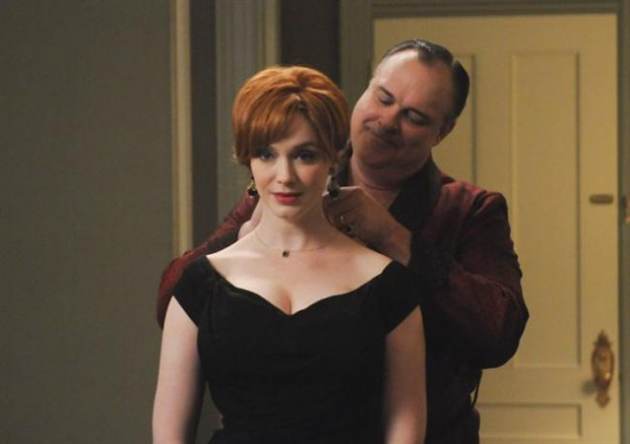 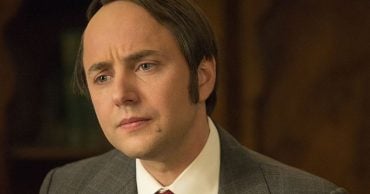 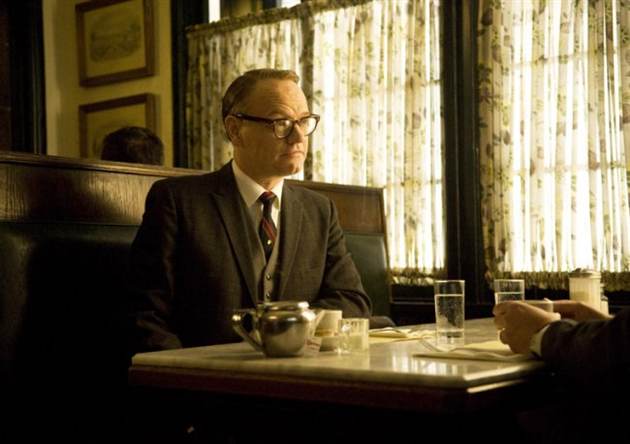