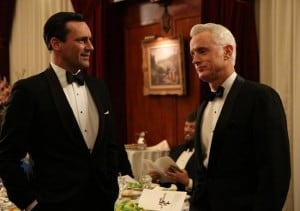 The last time Mad Men focused on a real life event in this much depth was the Kennedy assassination back in season 3; once again the violent death of an important political figure drives the story and motivates characters to address unresolved issues. 1968 is a particularly tumultuous year for America and the assassination of Martin Luther King, Jr. is one of the benchmarks in this period of race riots and demonstrations of discontentment. A lot has changed since Kennedy’s death in 1963, for the characters and on a much broader scale and even though some of the reactions are similar there is also a weariness that wasn’t present before.

In “The Grown-Ups” Don and Betty’s marriage ended and she took solace in the arms of the man that she is now married to. The Kennedy assassination was the catalyst for change; Pete’s anger at how he was being treated at work and that Roger’s daughter’s wedding was still taking place had him declaring to Trudy that he was going to start looking for another job. He became part of SCDP instead, but now his marriage is all but over. Pete reacts with anger again and this time Harry is the focus as he only seems to be concerned with how this death will impact TV ad revenue. This isn’t an unusual reaction from Pete as we have previously seen both his liberal side and his rage at people carrying on like nothing has happened and so it’s not surprising when he yells that “It’s a shameful, shameful day.” Bert tries to make the peace between the pair after Pete calls Harry a racist and while Pete reluctantly shakes Harry’s hand he continues to berate him for only caring about money. This is a real knock out moment for Pete, who has been rather abhorrent recently and this reminds us that he does have a moral compass.

Don’s responds in a similar fashion to how he did with Kennedy; he shuts down and while he could head into an empty office last time (well, Peggy was also there), work continues and there are people everywhere. One person who is absent is Sylvia and while he would usually have taken solace there, he spends the episode concerned for her safety as she is in Washington D.C. with Arnold and this is one of the worst hit cities for rioting. Don can’t show that he is overly concerned though as this might look suspicious and instead he has to put up with seeing a constant stream of buildings on fire on TV. Another reason why he can’t retreat as much as he probably would want to is because he has to take the kids and Betty isn’t buying any kind of “the city is too dangerous” excuses. Megan shows what attracted Don to her in the first place and takes charge of them, but when Bobby feigns sickness Don is left with his oldest son.

Out of the Draper children, Sally has been the focus so far and the constant revolving Bobby Draper actors haven’t made it easy to connect to this barely seen character. Bobby begins the episode tearing his wallpaper as it isn’t lined up and he starts ripping away more after news of Dr. King’s death has been reported; this earns him a television ban for a week. This doesn’t include the movies and Don takes Bobby to see Planet of the Apes; a place that Bobby notes is where people go when they are sad (as a personal note on this I remember going to see Romy and Michele’s High School Reunion on the day Princess Diana died and the theater was packed) and Don has definitely used this venue as a way to escape in the past. It also means that he doesn’t really have to talk to his son too much about all that is going on in the world. 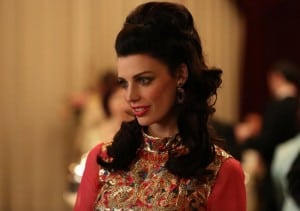 Megan does confront Don about what he is feeling and his inability to share and I think this is an important difference between Megan and Betty; Megan will push Don that bit further and sometimes it doesn’t work but on this occasion it does. Don’s monologue about his disconnected feelings from fatherhood is this character at his most honest and this moment almost makes up for all of his regression this season. He explains that he has been faking those natural paternal feelings and that he worried this came from having a terrible childhood and whether his father felt those things. When Don goes to comfort Bobby who is still having issues sleeping it reminded me of Don’s conversation with Sally when she was afraid of baby Gene; he has these moments where he shows what a great father he can be with how he reassures his children.

Another father/son relationship is explored in “The Flood” as we revisit Ginsberg’s personal life. Ginsberg is a character I have wanted to learn more about, particularly after his revelation to Peggy last season that he was born in a concentration camp and the man he lives with isn’t his biological father. This is very much a father/son relationship though and his dad has concerns that he doesn’t have a girlfriend so he is set up on a rather awkward date that looks like it could lead to more in the future. Ginsberg is embarrassed by his father attempts to help with his love life and title of the episode comes from the reference to the Biblical flood Ginsberg’s father notes that the animals were in pairs; suggesting that everyone needs someone in these trying times.

Peggy found out that her relationship is probably stronger than she thought as Abe casually mentions kids as a reason why he didn’t want to live on the Upper East Side; he wants them to play in a more mixed environment. Professionally this news event is a big moment for Abe as he heads up to Harlem in a tuxedo and while I was worried that it would descend into a big ideological argument between this couple it did quite the opposite. Elisabeth Moss does a terrific job of conveying how happy Peggy is, silently smiling on the sofa after this discussion about where they will live and it’s a small moment of joy in this bleak episode.

– Another great Peggy moment was with Megan at the awards as they discussed their nominations and Peggy excitedly tells Megan about the apartment. I’d really love to see these two get more scenes together, considering Don is still smarting from the ketchup incident I doubt this will happen too soon.

– What was with the look between Peggy and Ted? Is something brewing there?

– The gag that Paul Newman is so far away that Joan had to put her glasses is brilliant.

– There are several very awkward hugs in this episode; when Peggy embraces her secretary it is warm but when Joan hugs Dawn it feels forced. There are good intentions with both of these actions, it’s just one comes across as being more genuine than the other.

– The meeting with Randall (Ethan from Lost!) is so bizarre thanks to Randall’s probable excessive consumption of LSD (he talked Roger off a ledge once). Apparently Martin Luther King came to him in a dream and told him about this provocative ad idea, both Stan and Ginsberg’s reaction to this detail is amazing as they can’t quite believe what they are hearing.

– Henry is going to quit his job and run for state senate in an unopposed seat. This pleases Betty as this is what she has been hoping he would do. Later we see her looking at her new hair and figure as she holds one of her old dresses up and I think her dieting is going to take on new level of obsession.

– Pete getting a takeaway in his bachelor pad is a sad sight after Trudy rejected his earlier attempt to come back to the suburbs.

– The use of sirens in the episode increased the tension and meant that we couldn’t really forget the potential violence that could be occurring in other parts of the city.