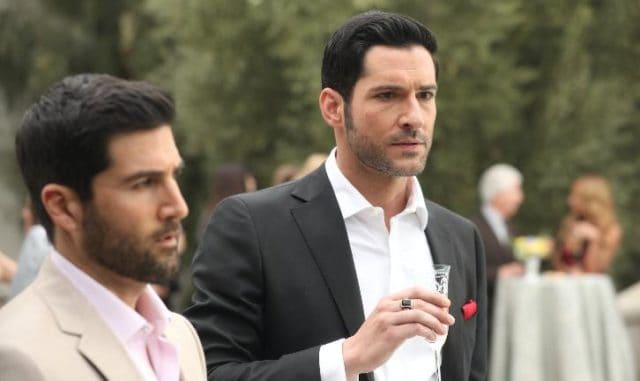 Holy Hell, this third season finale of Lucifer has my head spinning and my Deckerstar heart racing! Yes, you read that right, I said: “season,” not “series.” This show deserves another chance aside from the poor ratings. I mean, Lucifer’s epiphany about us having no one to blame but ourselves and him getting his Devil face back towards the end of the episode is proof enough.

From what we have seen in the last episode, we know that Pierce killed Charlotte instead of Amenadiel. Now it’s up to Deckerstar to solve the case and put an end to all this. The catch? Don’t let Pierce find out that they’re looking into him.

Their attempts to hide their secret sleuthing from the lieutenant did not pan out the way they hoped. Pierce figured out that Deckerstar and company are onto him the moment Ella handed him the burner phone. Although, I do have to applaud Detective Decker for seeing through Pierce’s emotional facade as the latter keeps his emotions under lock and key.

Back to the case, Deckerstar uncovers the rouse that Pierce is trying to frame Steven Chamberlain, an embezzler who helps high-end criminals launder money through charity. They even found the gun that was used to kill Charlotte in Chamberlain’s desk drawer. What I don’t understand is how Pierce was able to sneak that into the house without being seen? The place must have security cameras everywhere; no one gets in or out without being caught on tape.

Meanwhile, Deckerstar apprehended one of Pierce’s goons in his Sinnerman network. The guy told them that he’s only working for Pierce because he can find his sister Kelsey and kill her. Well, it turns out that the guy’s an only child and Deckerstar walks right into a trap set by Pierce. I did not see that one coming. This coming from a person who has watched a lot of crime dramas, it’s a pretty mind-blown moment.

The part where Pierce shot Detective Decker (don’t worry, she’s fine. Bulletproof vest) and Lucifer used his wings to shield them from the shower of bullets made me sit on the edge of my seat. I groaned in frustration as the detective is unconscious when the Devil reveals his wings. If she wasn’t, then she could finally see the truth and believe once and for all. Thankfully, and I’m saying it for the sake of the situation, she got her chance when Lucifer got his Devil face back after killing Pierce/Cain with Maze’s blade. Yes, Detective Decker, it’s all true. If all the Deckerstar fanfiction out there is any indication, she will stop freaking out after a couple of days.

Speaking of Cain, I have to agree with his assessment of Lucifer before the whole fight to the death thing started. The latter wants to be good, to redeem himself like Charlotte was doing. Perhaps that is why he got his wings back and his Devil face taken away. He was redeemed until he killed Pierce/Cain with a hell-forged blade and made himself into a monster again. On a side note, Lucifer’s Devil face reminds me of the character Lorne from the Buffy spin-off Angel. Only without the green face and the red horns.

The scene with Cain dying and saying that he’s going to Heaven is a bit anticlimactic. I mean, he killed Charlotte Richards. It was an accident, yes, given that his intended target is Amenadiel, but the fact remains. He killed another person, and no matter what he tells himself, he’s going to Hell. Lucifer also sinned angels cannot kill humans. By killing Cain, he has, inadvertently, broke the rules set by his Father and therefore became the Devil once again.

Lucifer getting the detective to safety on the helipad. The emotional moment they had before Lucifer goes after Pierce hit me right in the feels. I genuinely hope that another network (maybe The CW or AMC) will pick up the show. I want to see if my Deckerstar will remain intact.

The epic fight scene with Lucifer and Cain’s men was pure Devil awesomeness. The way he used his wings, albeit bloody, to send those goons flying. It would make the people who made the Kingsmen films proud. Granted, it’s not movie quality CGI, but it’s still good nevertheless.

I almost cried during the scene where Maze rushed into Dr. Martin’s office to save her from potential death. I’m glad to see the two of them bury the hatchet and return to being friends again. I feel sorry for Simon when Maze came barging in with a knife to his throat.

Ella taking off her cross necklace in defiance against God. That was shocking, to say the least because the lab tech is quite faithful to the Big Guy upstairs. However, I do understand why she did it. A close friend has passed on via an unfortunate death. I’d do the same if I were in Ella’s shoes.

Lucifer Season 3 Episode 24 Review: "A Devil of My Word"

Shocked by Charlotte’s death, Chloe and Lucifer work to take down the killer. Lucifer has an epiphany about everything and Maze decides to mend her broken friendship with Dr. Martin. Chloe finally sees the truth about her partner in this excellent yet frustrating third season finale of Lucifer.