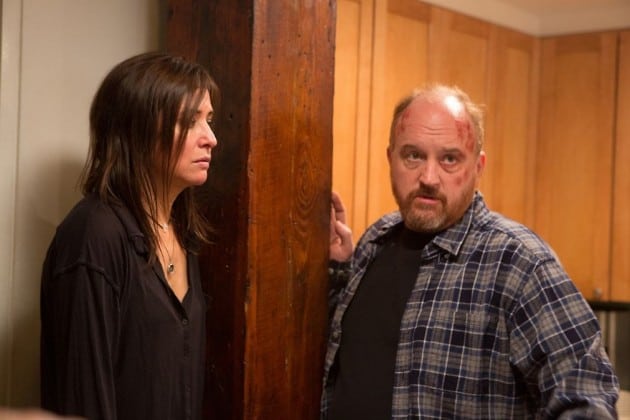 Each episode of Louie‘s fifth season (and really, the series as a whole) keeps circling around to Louie’s conversation in “Potluck” with his therapist, when he talked about not “knowing how to navigate between the good and bad times” anymore. He’s searching for clarity, in his relationships, in his career, and in the world – and as to be expected in human life, he’s coming up short in every department, only more and more befuddled as the absurdities of the world continue to knock him off his feet.

“Bobby’s Place” is a classic example of Louie as the sad clown, right down to ending with him crying through heavy eye make up in the final scenes while other people laugh at him (it begins with Pamela’s reluctant laughter, and ends with Bobby’s enthusiastic giggling). His daughters laugh at him, the woman on the street who kicks his butt laughs at him… it’s really just a terrible, no good day to be Louie, something hinted towards when him and Bobby show up at the wrong funeral, the first of many unnerving turns of events for the day. Even the hopeful moments the episode offers – or moment; I’m talking about visiting Pamela, of course – take turns for the worst, entering and exiting intimate moments in equally awkward fashion, be it gender-reversal role play between Peter and Jorthana, her application of eye make up on Louie before, or Pamela breaking up with him after.

That scene in particular offers a lot for viewers to chew on, be it the sexual dynamics between Louie and Pamela, or how their reversed gender roles in the foreplay continue into the conversation afterward – or it at least appears to, mostly only dancing around or suggesting certain ideas about sexuality and gender, which is not the typical Louie approach. His and Pamela’s relationship is one of the only serialized elements of Louie, and her appearances always serve two purposes: acting in thematic accordance with events (which in this episode, are mostly emasculating Louie), and existing as a new chapter in their story, which takes the two of them to increasingly personal, intimate places, and ends with Louie more hurt, and Pamela more and more turned off by the idea of them being together.

The later scenes in Pamela’s bedroom are the most fascinating element of the episode, flipping the typical gender roles of cliche post-sex routines, paralleling nicely with the scene of Louie getting the crap beat out of him earlier in the episode (in fact, it’s those punches that bring him to Pamela’s house; the yin and yang of pain and pleasure, no?), both in terms of how they unpack Louie’s assumed masculinity, and how they inform the emotional components of the scene (Pamela is cold and standoffish, Louie is affectionate and ultimately, regretful). In the end, which hurt Louie more? A strange woman beating him up on the street (emasculating him to his daughters in the process; “Was she pretty, Daddy?” they asked, hysterically laughing), or Pamela breaking up with him minutes after dominating him in the bedroom?

Of course, the latter is the more lasting and emotional: rejection is always more difficult to stomach than ridicule in life, though when pride is involved with either, they can both be challenging to internally reconcile. Yet, as it always does, Louie reminds us that even in the ugliest, most exposed, rotten moments of our lives, there’s something to laugh about; it may be terrible, it may be depressing, or emasculating, but it’s going to make somebody laugh, and that somebody might as well be you, right? We can’t end our day like Louie the sad clown; at the very least, we can shine a little light on someone else’s life with our own darkness, can’t we? Maybe that’s what Bobby is looking for in the opening scene, not positive reinforcement or emotional support (“You should help me out!”), just the reassurance that yes, everybody’s lives suck in different ways (for Bobby, it’s finding out his sperm aren’t active enough for him to have children – some may view this as a blessing, others a curse); if anything, it gives the ending of “Bobby’s Place” a nice, uplifting little touch, an amusing end to a hilariously uncomfortable series of emasculating events.