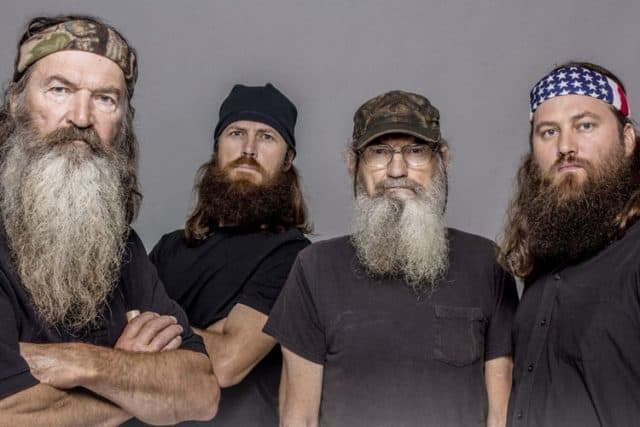 The Robertson family has brought 11 seasons of fun filled reality show episodes to A&E viewers. Who wouldn’t want to watch a show about guys with ZZ Top style beards and their spouses deliver home truths and sorting out family problems while they manufacture duck hunting kazoos? The Robertson family under the media spotlight had their share of controversy. The viewership dropped after the opinionated patriarch Phil Roberston’s 2013 comments about sinners ruffled quite a few feathers.

Still, despite the fallout from the GQ article, the show still managed to maintain a loyal viewership. A&E tried to suspend Phil for his insensitivity to the LGBT community, yet they brought him back on the show due to public demand. It is said that the majority of DD watchers vote Republican, but due to the many hilarious moments on the show, there is something for everyone as Duck Dynasty is like watching your own dysfunctional relatives in action as they run a family business. Here are some of the finest moments this series that made camo pants cool again:

When the team spends more time online that working, Willie puts up a firewall and hilarity ensues. When asked for the password, Willie says “Get back to work!” “Is that capitalized?” is the reply from the team still glued to social media, hoping to send one more tweet. Stuck with nothing but D-Mail. Uncle Si’s response is to give a “tweet” with a duck caller to end the discussion.

One thing all of the workers at Duck Command agree upon is that there is nothing as tasty as warm donuts. They are “succulent” and “the faster you eat them, the warmer they are going down your throat. It’s no surprise that Uncle Si won the competition, he told them he would and as Jase predicted, Si won because he wins “everything”. Having Si win alone makes this a fine moment.

Unless Mark Anthony Had a Chainsaw

It’s worth watching just to see good old Uncle Si dressed up as a beaver the size of a man, Anthony and Cleopatra, J Lo, Hobo Cowboys and other possibilities come into play in the spirit of Halloween fun. Willie, however, maintains that if you start with matching sweaters or couple’s costumes, things can only get worse. Uncle Si,as usual, is right when he observes that a creature with front teeth the size of your head is scary indeed.

When the guys take on the task of turning the warehouse into a scarehouse, the topic of horror movies naturally comes up. They all admit that a guy with a mask and a knife is pretty terrifying Si one-ups them by offering that the greatest scary movie of all is Freddy Cougar, and as much as he is corrected, he maintains his position. The scarehouse turns out pretty nice and the kids, and especially the adults, have a Robertson style good time.

Kay does some fancy decorating for Christmas during the “I’m Dreaming of a Redneck Christmas” episode. Trying to get Jase to hang up lights takes a bit of doing. Si is a crazy elf down at the church. Phil takes tree trimming to a new level and Kay puts her foot down about no chainsaws in the house. She also cooks a mean pigturduckin; however, the kid’s grossed out expressions when they view the raw roast before it goes in the oven cooked is priceless. They also remark that it smells awful but that didn’t seem to bother Kay one bit. She has plenty of other delicacies to bribe the family with. The comedy of the chainsaw being fired up in the family living room makes this a very special moment. Apparently, the Robertson’s do Christmas right, as they sold Holiday albums and have many fond memories to share

The fourth of July is a great day to honor those who fight for our freedom, so the guys recognized Uncle Si’s service during season 8 with a special unveiling of the Silas Merritt Robertson exhibit atThe Chennault Aviation and Military Museum. Si takes it all in stride, saying that planes are like old girlfriends, whatever that means. Still, it was a glimpse into the serious side of Robertson family values during this patriotic special episode.

This moment did not happen on Duck Dynasty, but when Willie Robertson visited Fox and Freinds to promote his new book about fishing, naturally questions about his involvement as a Trump supporter got a mention. He thought Hilary could win but then he got a big surprise. Politically, he first supported Bobby Jindal but after he hung out with Trump, Wilie changed his mind. He and his wife also liked Ben Carson for president. As the family, as well as many of the viewers, do tend to lean to the right of politics, this was not a surprise.

Although DD is heavy on the testosterone, the wives also provide memorable moments of comic relief. Missy thought they wouldn’t catch anything, what with the bugs diving into their bras, insects sticking to their lip gloss, and other mishaps. They did get one frog, and that’s not bad considering all of the wives are not swamp women. The men were just lucky that no one “got maimed” during the process. In a boat on a muggy night, you can just feel the sweat pouring off of them and the bugs biting. These conditions did not deter the ladies, who all were game to get more.

Virginia Repka-Franco has been writing for webzines, blogs and fiction magazines since 2002. Her work has appeared in print and on websites such as Classic Rock History, The Flash Fiction Press, Saturday Night Reader, Aurora Wolf, Devolution Z and other publications She has also written fiction and articles for women’s magazines. She lives in Florida.