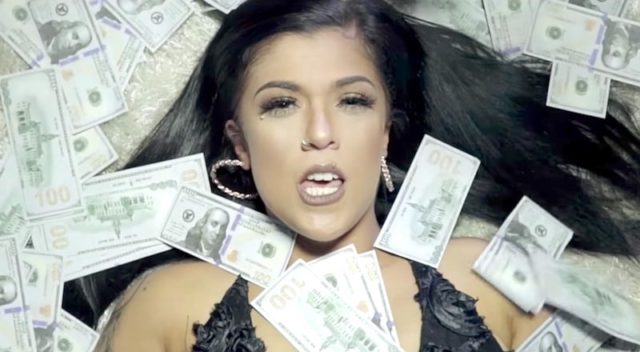 Ever notice how someone might seem completely nice when they’re off screen and then onscreen they seem just the opposite? That’s the vibe I really get from Right Cheek and Left Cheek from Little Women Dallas, who, I have to say, make me laugh with those names. I will do my absolute best not to crack any jokes but right now I’m kind of wanting something wash my eyes out just because the video seems offensive in a way that has nothing to do with their looks but instead the kind of attitude that they represent. It might be that off screen they’re completely different and are the nicest women you’d ever want to meet, but onscreen they seem to paint a stunning example of the kind of women that a lot of men would rather stay away from unless they’re interested in a short-lived fling.

It could be just me but even in their other videos, which are equally filled with attitude and the kind of sass that’s hard to take at times, these two just feel like they’re in the wrong venue. Their raps are about as one-dimensional as it gets and in all honesty the repetition of their beats is kind of annoying after a while. Obviously some people like them so knocking them with one opinion isn’t going to be enough to deter anyone from listening to them. That’s great actually since a person’s opinion should never be the measuring stick used by others to determine if they like something or not. But overall the issue I see with these two is that they’re low on talent and somehow big on celebrity status. And why?

Because of their difference to the rest of society.

Little people, it seems less than PC to call them anything else, are far more prevalent in the world than some might think, but they’re still seen as an oddity depending on the region a person lives in. And somehow they have the star power to be reality TV stars and the pull to start up a career as rappers. That flat out mystifies me since reality stars have a very short shelf life typically, really no pun intended, and the fact is that they really cannot rap that well. No offense intended, but most raps tend to switch up the beat and the tempo occasionally in order to make it interesting.

When it comes to hit sensations they seem to be making out pretty well so far but that money train also seems to be in danger of stopping since they don’t really strike me as the next breakout artists to take the world by storm. If they do it would be due more to the novelty of their celebrity status as reality stars and their appearance than anything else. It sounds mean even though it’s not meant that way, but people are still somehow enchanted by those that are so vastly different from themselves in a physical manner that they will pay attention for what seems to be a good amount of time before moving on to the next attraction.

Right Cheek and Left Cheek need to come up with another stellar act quickly or their star power might start running a little low. Who knows though, they could come up with a new song and make it onto the charts, then I’d be forced to eat my words.