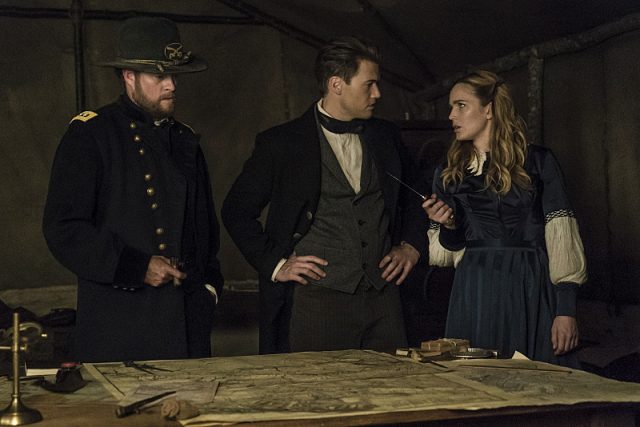 If you think the Civil War was borderline chaotic, throw in a horde of Confederate zombies. Yeah, I said it, zombies. They aren’t exactly like the zombies from The Walking Dead, but they’re still scary as hell. The Legends head to 1863 to rescue a Time Pirate in this week’s Legends of Tomorrow.

The episode began with a time pirate crash landing in 1863 Mississippi. After seeing said pirate start to turn into a zombie, I’d say that the rescue mission is off as a result. No one wants to save a zombie, am I right? Then again, saving the undead is now back in the equation. Why? Mick changed into a zombie after getting infected from a tooth of one of the Confederate soldiers; that’s why.

It also seems that this show took a page from the Scorpion writer’s book in this episode. I’ve never seen Dr. Stein afraid of anything. Except of course, when it comes to zombies. Maybe someone should stop watching movies that have zombies in them. Just a suggestion. At least Ray was able to get Dr. Stein to face his fear of zombies to cure Mick. The end part where Mick turned back to normal was hilarious. The former crook thought that he tried to kiss Dr. Stein.

There were a couple of things that baffled me while watching the episode. First, how did Mick figure out that Ray was in the Med Bay? The latter crawled through a vent to get there, so do zombies still have control over their senses as well as their infected brains? I do not compute. The other thing that baffled me was the message from Future Barry. He said that war is coming. What war?

Meanwhile, the Confederate zombie army closed in on General Ulysses S. Grant’s camp. Sara came up with a plan to blow the zombies up by making Nate lead them to some crates filled with nitroglycerin. The historian used his new powers and blew up the zombies to smithereens. While I applaud the brilliant plan, I’m still trying to wrap my head around the whole Colonel Sanders thing. Out of all the Colonels that Nate could have gone with for a fake name, he chooses the guy who made fried chicken famous. Oh well, still got a good chuckle out of it, so mission accomplished, show.

In the end, Jackson got the Confederate map to General Grant and freed the slaves on Mr. Collins’ plantation with Amaya’s help. Also, Mick gave Ray Captain Cold’s cold gun when the latter confessed that he doesn’t know what his place is on the team. Hope the tech genius knows how to use the weapon. I also loved the scene where General Grant gave Sara a pep talk leader to leader. There will be times when she has to make hard decisions, but as long as she believes in her team, there’s nothing they can’t accomplish.

The Legends go back to Civil War times and come face to face with a horde of zombies in this Walking Dead-esque episode of Legends of Tomorrow.