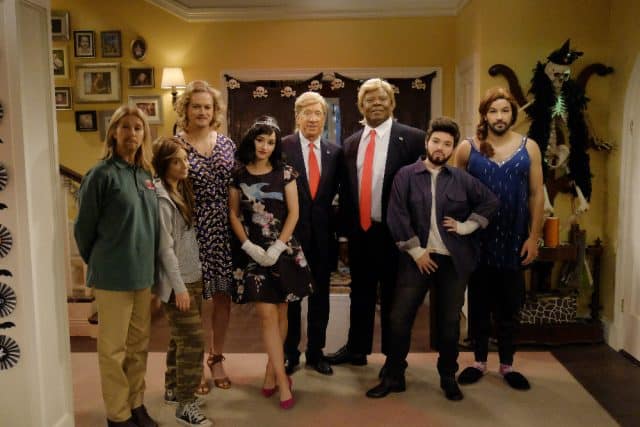 It’s once again Halloween at the Baxter house, and Last Man Standing presented a really effective, fun way to celebrate the pagan holiday. I really enjoyed watching all the promos get released for this week’s episode, and as a fan, I was not disappointed.

This week on Last Man Standing: Mike is tired of having Halloween parties, so he devises a plan to make this the final year: Everyone should dress as each other, and watch the arguments unravel the holiday. Vanessa gets some bad news related to the teachers strike. Mike and Chuck end up choosing the same costume.

First of all, I find it quite amusing/scary how much I relate to Mike. Not because of the Trumpster, of course, but my general disdain for parties and people. Though I always warm to the idea of spending time with my family and friends, the thought of going to bed and waking up in November certainly appeals to me. The whole reason I’m even touching on it? Mike is definitely not a caricature. He’s representative of a large population of working fathers, myself included. He’s much more realistic than people think. That said, I greatly appreciate the show’s ability to take that and make it funny.

For a classically shot, multi-cam sitcom like this, I remain amazed at the relevance and realism that they bring to the table. Obviously, it’s heightened, as most shows are, but the thing about Vanessa and the strike really got to me. I don’t want to get too political, but union strikes can result in layoffs, especially when you’re dealing with state funding. Lots of people don’t understand that at a base level, money has to come from somewhere, so people can’t just get raises with no quid pro quo. Hopefully, this will lead to an entertaining job search for Vanessa. Regardless of your economic viewpoint, I appreciate that Vanessa didn’t just get a raise and “yay, everyone’s happy”. Eve didn’t get into West Point, either. The characters and their failures are just as important as their funny lines and successes.

I’m trying to mold my favorite quotes section of my sitcom reviews into more of a place for extraneous thoughts on the episode. Let’s see how that goes:

Again, I appreciate the humor in this show because its so grounded in real life. Every character is relatable and (in a sense) ordinary, and that’s one of Last Man Standing‘s greatest strengths. The impersonations of each other were all spot on, and “Trick or Treat” was another enjoyable installment of an enjoyable show.