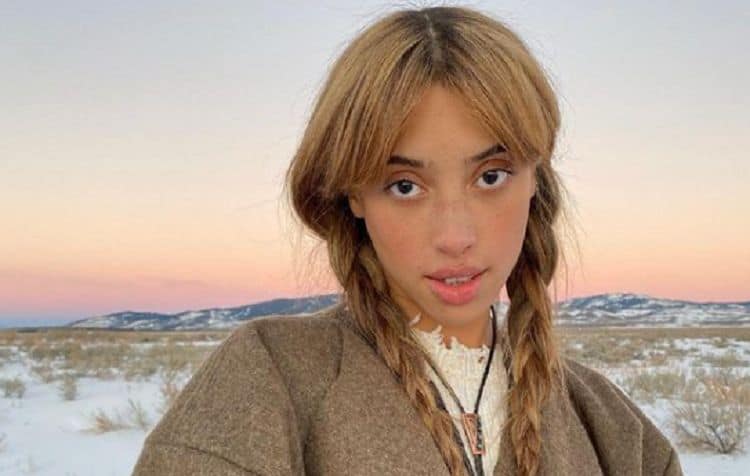 In the entertainment industry it’s become pretty common for talented people to just pop up out of nowhere. That’s exactly what happened with Khadijha Red Thunder. The beautiful young model made her acting debut in 2019 in the film After. Even though that was her first real acting role, she was a complete natural in front of the camera. Needless to say, it didn’t take long for fans to gravitate towards her. In 2020, she reprised her role as Steph in the sequel After We Collided. While it’s unclear whether or not she plans to do more acting, she could definitely have a future in it if she wants. Keep reading for 10 things you didn’t know about Khadijha Red Thunder.

Khadijha was born and raised in Spokane, WA and she comes from a very diverse background. She has both Native American, Black, and Spanish ancestry. When she was a teenager, she moved to Seattle for three years and it was there where she got into the modeling industry.

2. She Has A Huge Social Media Following

Social media has become an incredibly powerful tool, especially for people who work in the modeling and entertainment industries. Khadijha has learned how to use these platforms to her advantage and the work she’s put in to build her following has paid off. Currently, she has well over 400,000 followers on Instagram.

3. She Was In A Music Video

In addition to having been in two movies, Khadijha has also gotten a bit of acting experience by appearing in a music video. In 2019, she was in the video for the single “Think About You” by Kygo featuring Valerie Broussard. The video has gotten 42 million views on YouTube.

4. Thunder Really Is Her Last Name

The last name Thunder is so unique that many people probably assume that it’s simply a stage name, but that isn’t the case at all. Thunder is Khadijha’s real last name and she’s very proud of it. Plus, with a last name like Thunder, there’s no need to come up with a stage name.

5. She Didn’t Always Have Curly Hair

Over the years, Khadijha has become known for her curly hair, but she didn’t always have it. During an interview with Byrdie she said, “Growing up, my hair was straight. It was not curly at all. All I wanted was curly hair. When I was 13, I cut it shorter (I had always had my hair past my butt), and bam, it just got super curly literally overnight, in the matter of a week. I was so happy! My hair has changed dramatically. My body did too. Everything changed dramatically once I became a teenager. Each year it just gets curlier and curlier. It’s pretty crazy.”

6. She’s Worked With Some Big Brands

Every model dreams of getting the chance to work with major brands, and that dream has already come true for Khadijha. Her very first modeling job was with the well-known department store, Nordstrom. She has also worked with companies such as DKNY, Marc Jacobs, and Puma.

7. She Hopes To Inspire Young Girls

When Khadijha was growing up, she didn’t say many people in TV shows or movies who looked like her, and she hopes to help change that. One of her main goals is to inspire young girls and let them know that it’s possible for them to achieve all of their dreams.

8. She Loves Hanging Out By The Water

Thanks to modeling, Khadijha has gotten the chance to travel to places all around the world. No matter where she goes though, it appears that being near the water is her favorite. She loves swimming and simply relaxing by a pool or a beach. Since she spends a lot of time in L.A. these days, a beautiful beach is never too far away.

10. Her First Kiss Was With A Girl

Devin may have been the first person that Khadijah seriously had feelings for her, but her first kiss was actually with a girl. While talking to Hollywire she revealed that she had her first kiss in middle school with a girl who she described as “beautiful” and “blonde”.