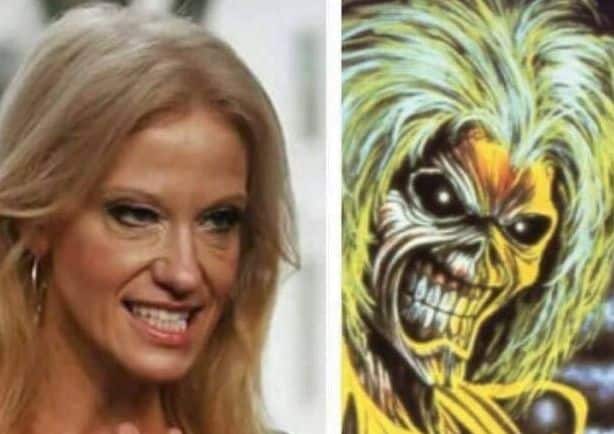 Yesterday was the day of the doll.Â  I say that because not once, but twice we were treated to pictures of dolls that looked startlingly like real people.Â  We presented you with a Belle doll from Beauty of the Beast that looked exactly like Barack Obama.Â  Next we presented you with a Daisy Ridley doll that looked exactly like Elrond from Lord of the Rings.Â Â  Today it seems as though the collective Reddit crowd wants to keep the look alike train running.

Obviously someone took a lot of time trying to cipher this one out of the archives but you have to admit this is kind of spot on.Â  I don’t personally think that Conway looks like a skeleton but you have to admit that the likeness of these two photos is uncanny. In case you are wondering the photo on the right is a graphic of heavy metal band Iron Maiden’s mascot Eddie the Head.

He is a perennial fixture of the group’s artwork, appearing in all of their album covers (as well as most of their singles) and in their merchandise, which includes T-shirts, posters and action figures. On top of this, Eddie features in all of the band’s concerts, as well as in the first-person shooter video game, Ed Hunter, and the role-playing game, Iron Maiden: Legacy of the Beast.

And now it appears that Eddie is a long lost relative of Kellyanne Conway.