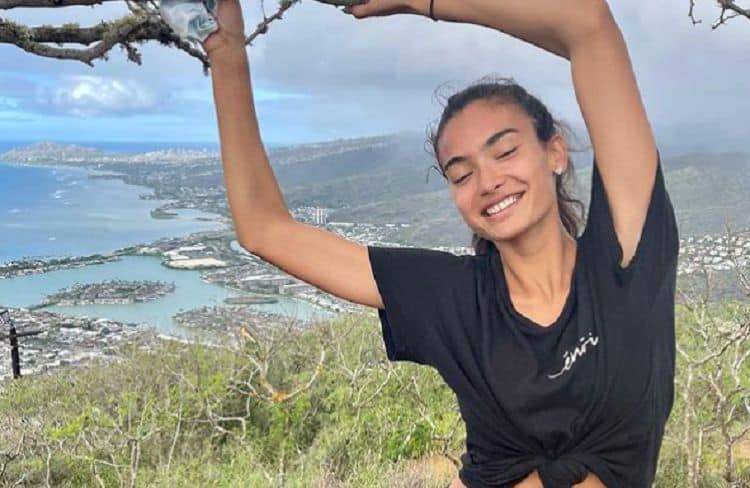 She’s a famous model, and now she’s engaged to a famous actor. Kelly Gale and actor Joel Kinnaman recently announced their impending marriage after his proposal, and it’s been all over the news. She’s a supermodel who has done some big things in her time, and people want to know more about her. She’s young, she’s beautiful, and she’s already accomplished more than most people twice her age, and we think it’s natural people want to know her better.

We already mentioned this, but we figured you might want to know just how young she is. She was born on May 14, 1995. This means she only just celebrated her 25th birthday in 2020. She’s done so much already at her age, and it’s quite impressive.

2. She’s Worked with All the Famous Names

She’s worked with some famous models, of course, but we are talking brands. You know you’ve made it as a model when you’re asked to walk in the Victoria’s Secret Fashion Show, and she’s been asked and done it many times. She’s also modeled for companies such as Playboy and the Sports Illustrated Swimsuit issue.

Her mother is where she gets her Indian genes. She was born in India, and she was adopted when she as only 5. The family who adopted her was Swedish, which is why she grew up in Sweden. She grew up to become a very successful woman. She was a pilot, and she became a dentist. She’s a lovely example of the fact that you can be anything you want to be.

If you thought her mom was the only cool one in the family, you’d be mistaken. Her dad is pretty cool, too. He is from Australia. He’s a photographer and a very talented one from what we understand, but he was formerly a football player (like soccer, not American football).

With a dad who is a football player, it might be difficult to grow up in a house that doesn’t appreciate sports. She did, and she was good at them, too. She must have gotten her athletic abilities from her father, and she grew up playing sports. She was a soccer player, and she also played tennis from the time she was seven.

7. Her Parents Did Not Support her Modeling Career

When she was discovered at the age of 13, her parents were firmly against her modeling career. They did not want her to pursue a career as a model, especially at such a young age. However, she was able to star working a year afterward when she was 14, and she immediately booked work with H&M. Her first major modeling gig was with Chanel, and that was back in 2012.

8. Her Fiance’s Ex Wished Them Well

It’s been almost a decade since Kinnaman and actress Olivia Munn dated, but they apparently have nothing but fondness for one another. They dated for approximately two to three years, and they ended things nearly 7 years ago. The actress had nothing but happiness for her ex when she commented her approval on his announcement post online.

9. She’s Open with Her Conversations

While she doesn’t share too much, she is open when she discusses things that are important to her. She will answer questions and she will address things that are about her, but she is careful not to give too much away. She did answer some Instagram questions posed to her by followers back in 2020, and she gave away a few cute details.

10. She Did Not Have Breast Augmentation

She simply has naturally large breasts, and we imagine she’s probably quite tired of sharing that story with the world. She’s told everyone time and time again to stop asking her about her lady bits and pieces because they are big, they are real, and they are hers. She’s said it so many times, and she’s got to be tired of being asked time and time again like her answer is going to change magically when someone else asks her if they’re hers or not (even if they were fake, they’re still hers, you guys).