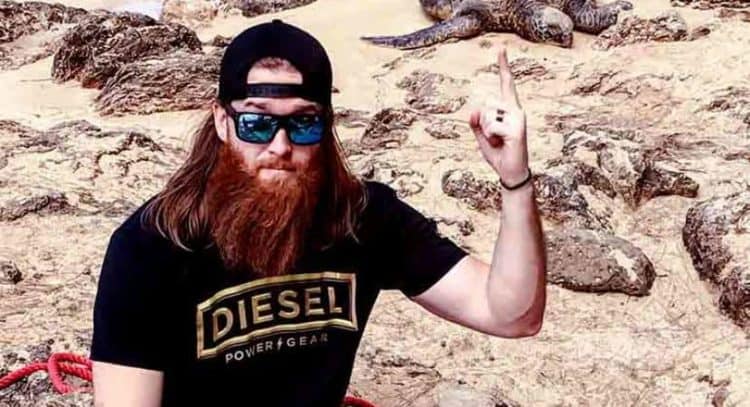 When Discovery Channel’s “Diesel Brothers” first hit our screens in January 2016, it made instant stars of its cast of Diesel Dave, Heavy D, Muscle and Red Beard. 5 seasons on, diesel fans are still lapping up the gang’s exploits. The show follows the Dieselsellerz team as they build some of the biggest, baddest, most tricked- up diesel-powered vehicles you can imagine. They may be an environmentalist’s nightmare, but diesel-heads can’t seem to get enough of either the show or its cast. If you’re one of them, take a look at these 10 quick facts about one of the show’s key players, Josh “Red Beard” Stuart.

Thanks to his success as a diesel mechanic, Stuart had already acquired a pretty healthy bank balance by the time he buddied up with the Diesel Brothers. Once he joined their crew, the only way for his fortune to go was up… according to Net Worth Reporter, Stuart is now worth an estimated $900,000. He’s still got some way to go to catch up some of his cast mates up, though… both Heavy D and Diesel Dave are worth over twice as much at $2 million each. On the plus side, he does at least have the edge over Keaton Hoskins, who’s worth a comparatively paltry $500,000.

Stuart is an avid social media user and is only too aware of the power it yields. Over the past few years, the mechanic has used the platform to significantly increase both his status, and his wealth. Thanks to his growing fanbase, his Instagram page now boasts more than 400 thousand followers. He’s not just posting cute baby pics or snaps of his lunch, though… the business savvy Stuart uses the site to promote and market some of the modified trucks for sale at Dieselsellerz. If you’re on the lookout for a bespoke Chevrolet with custom bumpers and a military engine, you know where to look…

Stuart’s reputation as a skilled negotiator and a money- hungry businessman was the foremost reason he was invited to join Dieselsellerz. He and Heavy D had actually met several years before- when Heavy D spotted the potential to grow the business with a little outside help, Stuart was his first port of call. Stuart’s abilities as a mechanic have undoubtedly come in handy, but it’s his financial savvy and ability to swing a deal that have helped turn Dieselsellerz into the multi-million-dollar business it is today.

Stuart is a dedicated family man, frequently gushing about his “super-hot” wife and their family of young kids. According to Stuart, his success in business pales in comparison to his success in love, with the proud dad of four listing his greatest achievement as “talking a super-hot, amazing woman into marrying me.” The happily married pair recently celebrated their 11th wedding anniversary, with Stuart taking to social media to mark the occasion with some pretty hard core gushing: “11 years… I couldn’t have imagined a better companion to create a life with,” he shared. “Simply put, she makes EVERYTHING better. Period end of story.”.

5. He was raised on diesel fumes

Stuart was raised in Roosevelt, UT in the Uintah basin. Stuart discovered his love of trucks from a young age… something that was perhaps inevitable given that.in the Uintah basin, diesel is king, and woe betide anyone that chooses not to worship at its altar. As Stuart’s official bio on the dieselsellerz website notes, “Everybody drove a diesel, and if you didn’t, you wish you did — diesel trucks are just part of the culture.”

6. He sparked concern when he went MIA

During the season 5 opening of Diesel Brothers, fans grew concerned after Stuart failed to make an appearance for several episodes in a trot. Keaton Hoskins (aka The Muscle) expressed what everyone was thinking when he asked Heavy D “Where’s Red Beard?” Diesels Dave’s response of “Isn’t he usually in these meetings to yell at us?” didn’t exactly help. But fans need worry not… the fan favorite is still very much a part of the official cast (according to Discovery’s website, at least).

7. He helped victims of Hurricane Harvey

In 2017, Stuart showed of his philanthropic credentials when he and the Diesel brother’s helped victims of Hurricane Harvey. Stuart was instrumental in organizing a convoy of trucks loaded with food, water, towels, baby formula, sanitizers and clothing items. The items were distributed around Southeast Texas, with Stuart and the brothers at the helm.

8. He’s the serious face of Dieselsellerz

Even before hitting the big time on Discovery, the cast of the Diesel brothers were pulling in the viewers with their online videos, most of which centered around their notorious pranks. Hiding trucks was one of their biggest jokes, with the running gag revolving around someone kidnapping one of their colleague’s trucks, then secreting it away until the owner eventually found and reclaimed it. As Hot Cars reveals, while Stuart can be as big a goofball as the others, he’s known as the one who pulls things in if they start getting out of control…. if a prank is escalating, you can be sure Red Beard will be one to reign it in.

9. He helped restore a reservation area

The Diesel brothers may have been called to task over their slightly iffy attitudes to the environment, but Stuart is doing his best to turn the tide of opinion. The bearded star recently reveled on his Facebook account that he’d been involved in restoring and re-opening Maple River Wellness Springs by the Oneida Reservoir. “If you live anywhere in the mountain west area listen up!” he shared. “I recently got involved with a project to renovate and reopen some magical hot springs in Idaho. It’s full of bald eagles, hawks, wild turkey, swan, and more hummingbirds than you can count! Not to mention the incredible healing lithium water gushing out of the ground!”

With his bearded appearance, choice of career and southern credentials, you’d expect Stuart to be covered head to toe in tattoos… and you’d be right (at least partially). Stuart got his first tattoo in March 2019, but clearly took the mantra “go hard or go home” to heart. Rather than opt for a small inking for his first attempt, Stuart choose to cover his entire back in a detailed pattern that includes a rooster, a hawk and a phoenix.