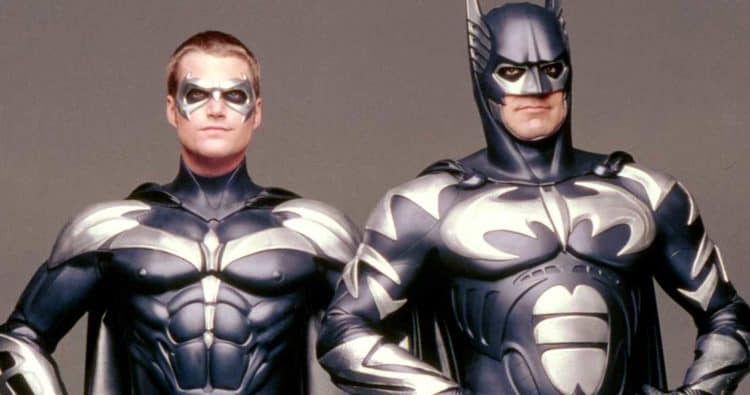 Just when you get to thinking that Joel Schumacher regrets Batman & Robin simply because the movie tanked, the whole issue of Batman and Robin being gay comes in. If you’re sitting there with a confused look on your face then yeah, you might have just said “What?” in a very confused sort of way, since while some people might have spouted off about the dynamic duo being gay over the years, and the fact that Joel Schumacher is gay, aren’t really why people had such an issue with this movie. You can imagine that man who’s claimed to have had sex with 20,000 men over the course of his life, which seems exhausting just to think about really, would no doubt think that people poking fun and accusing him of putting homosexual themes in this movie, would be a bit defensive. In reality there were accusations of a gay lean in this movie, but that’s not why it was slammed so forcefully by the critics and the fans alike. Even Kevin Burwick from MovieWeb, who usually has a pretty neutral to positive stance on things like this, seems a bit pensive in his article on how poorly this was executed.

It was just horrible.

That’s right, the movie was downright horrible and didn’t get any better from the opening lines. From the campy feel of it to the ill-timed humor and the whole entire shebang, this movie was just wretched. Now to be honest there are those out there that tried to like it and those that attempted to convince themselves that they liked it, but a couple decades later it’s a little too late to start saying ‘oh I’ve always liked that movie!’. Stop it, just stop and realize that you didn’t like it then and by now that you’ve changed perspectives over the years, you can admit that you probably wouldn’t mind if it was stricken from the records. That’s not going to happen honestly but given Schumacher’s desire to have never done this one can’t blame him for regretting it after the fact, it’s just that back in the 90s things were a little different and it was believed that Clooney would help turn the franchise around as Keaton and Kilmer were already out and not coming back. Even the villains that were selected for this movie were cringe-worthy at best, and they were played by two of the best in the business at the time, Arnold Schwarzenegger and Uma Thurman. In a way it almost seems like there’s been a curse over the Batman for decades now that Ria Misra from Gizmodo can better explain. In a big way anyone that’s put on the suit, well, most anyone excluding Christian Bale, has experienced a moment of failure when their career just seemed to be headed right for the drain.

There are times when it’s a delayed effect, as Michael Keaton didn’t experience this until after Batman Returns, while Val Kilmer’s career was already kind of headed that way before Batman Forever. But Clooney, and even Chris O’Donnell, didn’t really snap back to focus right after the movie as the flop cost them both a little in terms of respect and reputation. Michael Gough didn’t seem to fret over it, and Alicia Silverstone didn’t have much left before coming to the cast, so in a way, only Batman really suffered a great deal, as Matthew Loffhagen from ScreenRant might agree. The whole idea of thinking that the movie was being bashed over any possible gay references or ideas is kind of silly to be honest, even though it is true that people have poked fun at the idea of two grown men living in the same house despite the fact that there wasn’t anything to indicate that they were gay. No, it was the plain and simple fact that Batman had been taken from a very dark and brooding character as Tim Burton had laid it out to a campy, witty version that had little if any redeeming value and was little more than a kid-friendly version that was actually less intense than the animated series.

That seems a bit harsh, but then again so does the truth when we hear it so I think I’ll go with it. The reason that Joel Schumacher regrets making this can’t possibly be the supposed gay lean that people accused him of, but if he’d said that it was because it turned out to be one of the least popular Batman movies of all time he might have at least saved a bit of face. In the history of Batman this actually takes the number one spot for being the worst in the eyes of many people, and this is with the addition of Batman vs. Superman: Dawn of Justice. At this point the Robert Pattinson version is going to have to hold up to massive scrutiny, otherwise fans might forget about this movie entirely and pick a new target, especially if Batman glitters.