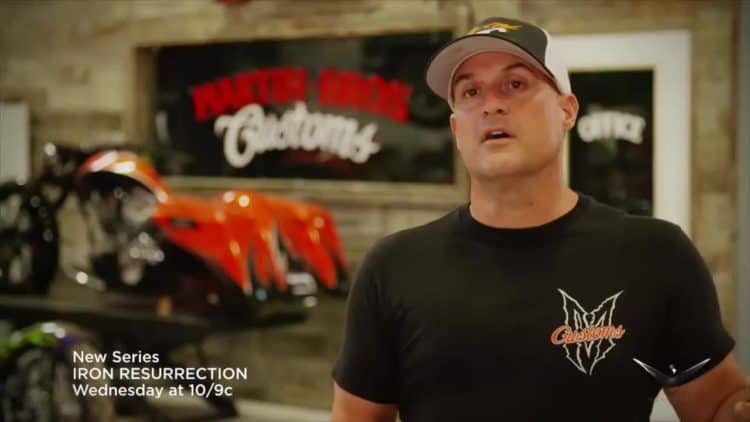 Joe Martin has loved motorcycles and cars for most of his life, but he never imagined that those things would eventually turn him into a TV star. Joe rose to fame in 2016 with his show Iron Resurrection which featured his custom car and motorcycle business, Martin Bros Customs. During the show’s time on the air, viewers got the chance to see the Martin family work on some pretty cool vehicles. Not only did the world fall in love with the craftsmanship, but Joe proved to be the perfect reality TV star. Although it’s been a couple of years since his last on-screen appearance, Joe is still hard at work and he’s thankful to be doing something he loves. Keep reading to learn 10 things you didn’t know about Joe Martin.

Texas is the state that comes to mind when people think of Joe, but he was actually born in Chicago. He relocated to the Austin, Texas area with his family when he was about 10 years old and he’s called it home ever since. Joe is very proud of being a Texan and he really loves the culture of the area.

2. Iron Resurrection Isn’t The Only Time He’s Been on TV

Most people who are familiar with Joe Martin know him from Iron Resurrection, but his reality TV journey actually started long before the show came along. He made his first TV appearance in 2004 on Biker Build-Off. It was actually this show that led him to an opportunity to have his own show.

Cars and bikes are very high on the top of Joe’s priority list, but he also has a special place in his heart for his furry friends. He is a very dedicated dog person and he and his wife, Amanda, have several dogs. However, his love for dogs goes beyond being a pet parent. He is also passionate about causes relating to animal welfare and he has helped raise money for animal shelters.

Being on reality TV can be a mixed bag, and in some instances, it results in a negative experience. Luckily for Joe, that hasn’t been the case. When asked if he regrets the decision to do the show, Joe told Fuel Curve, “…we feel so grateful to have the show. It’s been priceless to us. Being featured on TV automatically puts hundreds of thousands of eyes on our shop and our work. It’s given us the opportunity to work with great customers on amazing cars, and set us up to be busy for years to come.”

There is a misconception that people who do reality TV shows love being the center of attention, but that isn’t always true. For the most part, Joe and his wife are very private when it comes to their personal lives. They prefer to keep all of the attention on their business and this has worked well for them over the years.

6. He Used to Have A Bike Shop

Martin Bros Customs isn’t Joe’s first time being a business owner. Several years ago he owned a bike shop. Unfortunately, however, it went out of business during the Great Recession. Although losing the business was heartbreaking at the time, Joe managed to bounce back quite nicely.

Martin loves what he does, but that doesn’t mean that he wants to spend all of his time being cooped up in his shop. When he gets a break from work, he loves being outside and enjoying the beauty of nature. He likes doing things like fishing and exploring his surroundings.

There’s no information to suggest that Joe has even been a musician, but we do know that he is a big music fan. During his interview with Fuel Curve, Joe shared that he likes a variety of music. However, he noted that on long road trips he likes ” to listen to something like Lynyrd Skynyrd’s ‘Whiskey Rock-A-Roller.’ That’s a great traveling song.”

9. He Enjoys Working With His Family

We’ve all heard the saying “don’t mix business with pleasure,” but that mixture has proven to be a winning combination for Joe and his family. He works very closely with his wife and brother, and it’s something that he genuinely enjoys. In fact, in some ways, it’s probably a lot easier than working with strangers.

Joe is the kind of person who doesn’t shy away from challenges. As a result, he is always open to learning new things. Having this kind of mindset has helped him achieve lots of success over the years because the ability to overcome challenges is a key component of running a business.