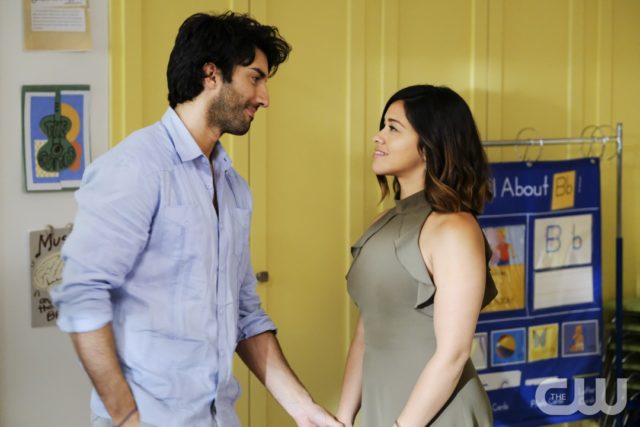 I’m going to borrow from the incomparable crooner of romantic ballads, Frank Sinatra, to introduce the theme of this week’s Jane the Virgin. “Fairytales can come true, it can happen to you, when you’re young at heart.” Every little girl is taught that she can have the perfect fairytale romance with the perfect storybook wedding and live happily ever after. Not even real princesses get that. This is why modern mothers aren’t reading Cinderella to their kids anymore! They keep having to re-imagine the fairy tale so their kids won’t grow up as disillusioned with life. That’s not to say fairy tales don’t exist, they are just twisty telenovelas.

It’s time for Xo and Ro’s Fairytale Wedding! Think Disneyland on steroids. In addition to being their child, Jane is Xiomara and Rogelio’s best friend. Of course she would be the maid of honor, and it makes complete sense why she should officiate. After all, Jane is closer to God than any celebrity Rogelio could think up. At least this is the one position Jane is happy to fulfill. She didn’t anticipate planning her parent’s entire wedding, but it’s perfect nonetheless.

Jane ends up in the one position she never, ever, ever wanted to be in: between Rafael and Petra. They definitely don’t have a fairy tale romance, yet they both want Jane to advise them on whether or not it’s possible. Neither one of them likes her honesty, but Jane is really being dishonest with herself. She didn’t want to find her family dynamic disrupted if Rafael and Petra got back together, and was maybe even a little jealous of what they could have. Watching them be miserable apart isn’t worth it if they could have a chance. Jane gives great advice on an average day, but who knew drunk Jane could be so wise too?

Jane would just love for her life to be simple. Okay, so that’s never going to be possible. She’d settle for an easy love life. Having a fling with Fabian is great, but the guy’s getting too clingy. It’s just a shame that Jane needs Fabian’s connections to get a purebred white horse for her mother’s wedding. When Fabian finds out, things get a little out of hand. Some things are said, some scenes are delayed, and Jane gets in a good punch defending her father’s pristine face. Eventually the men pull it together, but it was touch and go there for awhile.

Was there ever any doubt that Rose was Scott’s killer? Normally I wouldn’t condone Rafael lying about his cancer returning to get Luisa and Rose back to Miami, but I’ll make an exception in this case. It’s not even that Rose is a cold-blooded drug dealer and killer. It’s not even that she killed Rafael and Luisa’s father, which Luisa likes to forget. It’s that she kidnapped Mateo and would gladly threaten Rafael’s children if it meant getting what she wanted. Rafael doesn’t have to apologize for lying to his sister because Luisa has shown no consideration for the safety of those children. It’s about time Rose was arrested for all her crimes.

To answer the question posed at the top of this page, Jane would just really like some wine and some “me” time. Or our heroine needs to get drunk on the couch with her mother talking about feelings. Forget fairy tale-that’s the dream!

Tune in next week for Jane the Virgin‘s third season finale, which will hopefully see Xo and Ro united in the bonds of matrimony.

Jane the Virgin becomes Jane the Wedding Planner/Love Guru as she negotiates her advice on two different romances.