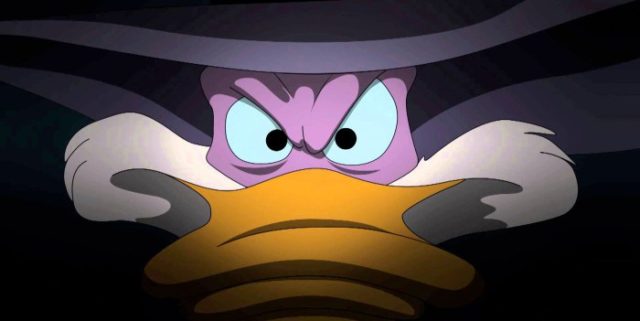 Most of us who had our noses stuck to the television to watch the latest episode of “Darkwing Duck” would have never guessed that there was a connection with the cartoon and James Bond. The animated series was popular in the 1990s. It was recently brought to our attention that a trademark obstacle prevented the series from following its original intention.

The evolution of “Darkwing Duck”

The first draft of the script for “Darkwing Duck” included a distinctly different layout and series title. The initial concept was billed as “Double-O Duck,” however, the name intruded into the trademark and rights held by the mega blockbuster James Bond films. There was no wiggle room so the name of the cartoon was changed to “Darkwing Duck. The show was a spin-off from the also popular “DuckTales” cartoon.

Similarities to the Bond theme

In one of thee episodes, Launchpad McQuack became involved with a spy ring and was believed to be a spy. One of the female characters was obviously inspired by the Pussy Galore character and it was obvious that she was attempting to seduce the hapless duck. The scene happened in an episode of “DuckTales which was titled “Double O Duck.” The shows are closely related and although kids loved them, there are a few notably racy scenes that aren’t exactly what most parents feel is appropriate for children. In reality, the few innuendos would likely only be recognized by adults, making it more entertaining for parents who watch the show with their kids.

The rationale for “Darkwing Duck”

It was because of the big success of the “DuckTales” series that the producers and creators decided that a spin-off series was in order. It would be another animation that was related to the original, with some of the characters making an appearance. This would give the new show a leg up on attracting a viewership and following. A spy version of the show would be perfect. The “Double O” title fit well, but was not legally accessible. That was how a James Bond trademark led to the “Darkwing Duck” show.

Moving from one hero to another

With the James Bond venture leading to a dead end, the creators of “Darkwing Duck” were obliged to identify another popular character to pattern their hero after. They decided to go in the direction of Batman, yet in a diluted form that would not infringe on any trademarks. It took some time, and going back to the drawing board, quite literally, to develop the character of Darkwing. Since the term “Double O” was owned and tightly sealed up by the Bond franchise owners, they found another direction to take both the show and the character.

For die-hard fans of “Darkwing Duck” and its parent series “DuckTales,” there was much more to the show than fans ever realized. It took time and careful planning, and because of copyright protection on “Double O” anything, most aspects of the animation had to be rethought and re-written. Perhaps it was for the best anyway, because who didn’t love “Darkwing Duck” growing up?