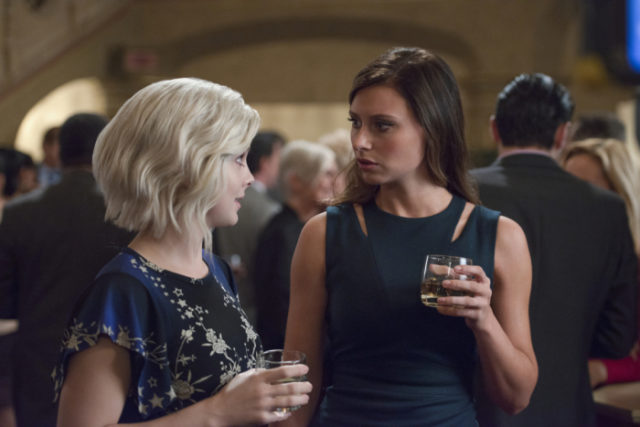 The best word to describe tonight’s episode of iZombie is “electric.” Absolutely everything in “Twenty-Sided, Die” works exceptionally well, and each moment, big or small, has a purpose, whether it’s to simply entertain the audience or push the many different storylines of Season 3 forward. Throughout the hour, I found myself laughing, gasping, and nearly crying, and that’s a credit to the episode’s writer, Kit Boss, and the entire iZombie creative team.

Obviously, the main attraction in “Twenty-Sided, Die” is Liv on Dungeons & Dragons brains, and Rose McIver, along with the rest of the cast, does not disappoint. From the moment Liv consumes her brain pot pie, she’s a ton of fun, narrating almost every action of hers and Clive’s at the police station, rolling dice to decide whether or not she’ll join him in an interrogation of a suspect, and even bringing her entire friend group together for a hilarious game of D&D, which stands out as the true highlight of this outstanding episode. Every single thing about the gang’s D&D game night is pitch perfect, from Liv’s old lady voice to Peyton’s total disinterest to Clive’s growing excitement. In fact, it’s so damn entertaining that it’s almost a bummer when we have to step away and get back to the case of the week once Liv has her vision; I could have seriously watched an entire episode of her, Peyton, Ravi, Clive, and Major playing Dungeons & Dragons.

But thankfully, Liv’s vision of Dan’s secret room leads to the FBI being called in to take over the murder case, since evidence that she and Clive find seems to indicate that Russian hackers could have been the ones responsible for his death. Of course, the FBI being brought in to take on the case means the return of Dale Bozzio, resulting in the most heartbreaking scene from tonight’s episode, as Clive runs out of the station and onto the street to finally get a chance to speak with her. Dale is clearly (and understandably) still upset with Clive and how he dismantled her case against Major at the end of Season 2, and even though Clive pours his heart out to her, telling her that he’s lost without her in his life, she doesn’t let her guard down and continues to keep him at a distance, even twisting the knife a little with her final words to him. When Clive asks if Dale has a suspect for the case, she pointedly responds, “It’s my case, Clive, and I’m afraid I can’t trust you with that information.”

As a big fan of Jessica Harmon and the Clive/Bozzio relationship, I hope Dale’s return in tonight’s episode means that she’ll be back for the remainder of the season. Maybe there’s still a way that she and Clive can work things out, but even if they can’t, their conversation in “Twenty-Sided, Die” works a powerful reminder of how much Clive has given up in order to protect Liv and her secret. He sacrificed both his relationship with Dale and a chance to work at the FBI by releasing Major at the end of last season, and it’s clear that he is committed to the zombie cause, no matter what Chase Graves might think.

Because, of course, in his first interaction with Liv at Baracus’s fundraiser, Chase Graves not only pressures her for details on the investigation into the murders of Wally and his family but also questions Clive’s allegiance to Team Z. As Chase’s introduction in last week’s episode seemed to indicate, he doesn’t care at all for humans and would rather them not know anything about zombies at all. But he’s also a driven, determined individual that will do everything he can for the zombie race (although he does show a glimmer of a softer side when he compliments Liv’s dress), which is why he’s the first one to fire back at the shooter who tries to assassinate Baracus, a shooter who may or may not be associated with Harley Johns and his group of zombie truthers.

However, even if that shooter isn’t someone that Harley ordered to go after Baracus, it’s evident that he and his blood-thirsty gang have big, dangerous plans in store for any and all zombies that they encounter. Not only does Harley try to get his fellow group members to stalk and kidnap potential zombies at the meeting that Ravi is undercover at near the beginning of the episode, but he and his brother actually capture one themselves. And who exactly is the zombie that they throw into the back of their van? Well, it’s none other than Don E., who makes the stupid mistake of scooping out a huge portion of blue brain for himself, which leads to a very bad and very public trip at The Scratching Post.

With Ravi’s cover still intact (Harley and his brother show how much they trust him by bringing Don E. to the morgue), there’s a chance that Blaine’s work partner can still make it out of this situation alive. But more importantly, it proves that these zombie truthers are out for blood and that they won’t ignore reckless, suspicious behavior from potential zombies in their sights. Now, more than ever, it’s important for zombies like Liv, Justin, and even Baracus to be cautious and careful; they might even want to learn a thing or two from Chase Graves, because humans like Harley and his brother are ready to strike at any moment.

But these zombie truthers might not even be the most dangerous people in Seattle right now, and we might need to be more worried about Peyton’s safety than Liv’s. Because as the final scene of tonight’s episode shows, Mr. Boss in back in town, baby, and he’s got only one thing on his mind: revenge. A cliffhanger like that is how you cap off the most exciting, hilarious, and just plain entertaining episode of iZombie Season 3 yet. Here’s hoping the final four installments of the season can somehow match it.

Liv eats the brain of Dungeons & Dragons fanatic, and Don E. gets into some major trouble in a tremendous episode of iZombie. 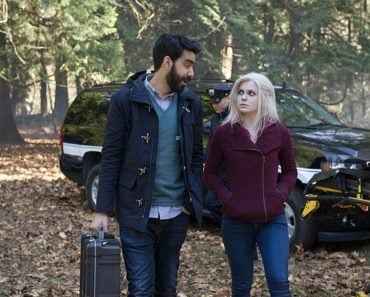