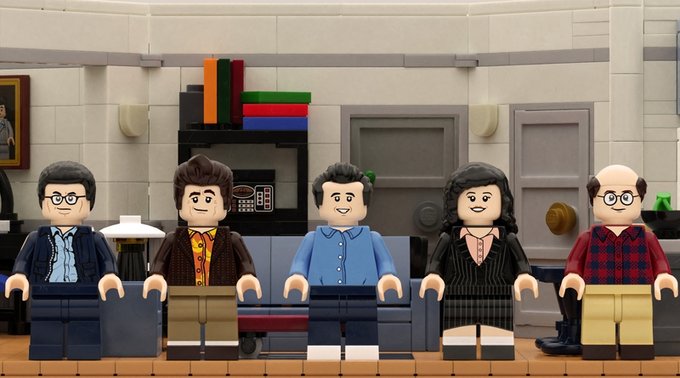 For one reason or another a lot of people go nuts when they find out that one of their favorite shows or movies is going to be represented in a fun and endearing way that will likely be forgotten within the next year, if that long. But at the moment a lot of people are excited to see that Kevin McAllister’s home from Home Alone and Jerry Seinfeld’s apartment from Seinfeld will be getting the Lego treatment and will be available at some point. Each set is going to be extremely recognizable since a great amount of detail is being put into each construct and as you can imagine, both are being marketed with the characters that people really came to care about. This means that the Home Alone set will be featured with Kevin, Marv, and Harry, while the Seinfeld set will apparently have Newman, Kramer, Jerry, Elaine, and George. It’s kind of funny to realize that the smaller set will have more characters, but the Home Alone set will consist of 3,000 pieces, so one can imagine that it’s going to be pretty big. The unit cost for each set is likely going to be kind of pricey as well since if Star Wars sets are going for a hefty price depending on size one can only imagine what other movie Lego sets would go for.

People are willing to pay for just about anything so long as it means something to them however, and Home Alone has been a favorite Christmas movie of many people for a while now, especially those that grew up with it and were able to see the movie in the theater. While the sequel was still great the third movie moved away from the main idea and as a result kind of mucked it up a bit. With a reboot on the way that’s not dealing with the McAllister’s and will be redoing thing in its own way a lot of fans are likely divided still on what will happen and what needs to happen. After all, Macaulay Culkin and the rest of the cast really helped make the movie, and while it’s obvious that they can’t be brought back it’s still enough to think that whoever is still around should at least get a cameo here and there. Simply rebooting something without thought to the original. While this doesn’t have much to do with Lego’s there’s still something to be said for keeping the original idea as solid as possible, and trying to think about anyone else taking on the Home Alone idea is kind of hard to do when the overall story could mean that the McAllister house could become a thing of the past the moment the movie is ready to roll. That might sound like paranoid talk, especially consider that a reboot doesn’t automatically eliminate the original, but it’s still a train of thought that many people tend to travel down.

The Seinfeld name and apartment and overall idea is likely to remain as is for a long time since the thought of a reboot is kind of ridiculous since anyone else trying to take the Seinfeld name is a bit ludicrous to a lot of fans. After all it was named after the main star and trying to reboot that is hard to even wrap your mind around. While the set isn’t all that big from the looks of it the accuracy is spot on it feels like, which would be great for collectors and for those that would just love to own another piece of something that has to do with the show. The Seinfeld show was very much a program that a person had to be into in order to enjoy since otherwise it was almost like a study in the most neurotic people on earth given that the level of positive vibes in the show was typically quite low and the people were usually shifty, anxious, and had a slew of personal problems that were made into comedy. It did follow that one concept however, that anything sad and depressing was able to be turned into something funny, and a lot of people happened to love it for a number of years. But like all things it had to end eventually, though people are still talking about how Seinfeld ended today since it concluded with Jerry, Kramer, Elaine, and George in a jail cell after being arrested for not bothering to help someone and just bearing witness to it.

All in all these Lego sets sound like they’re going to be kind of spendy but will also be very detailed, so they might be worth the money. At the very least they’d be nice collector’s items to show off, and conversation pieces that might get a few well-earned chuckles.