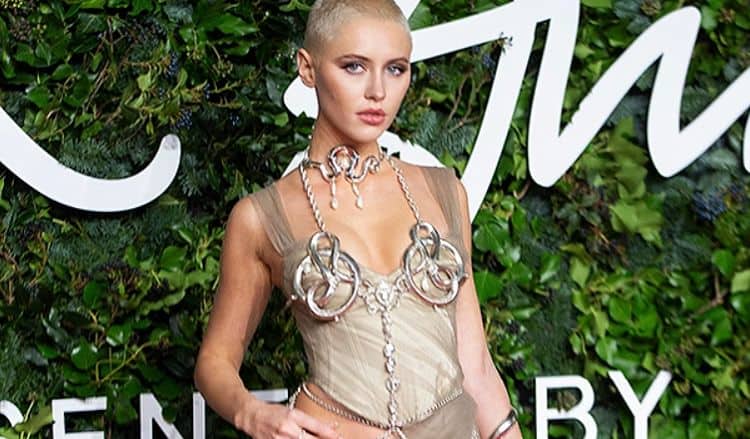 Despite being the daughter of the legendary Jude Law, Iris Law has spent much of her life staying out of the entertainment industry. That won’t be the case for much longer, though. Iris is officially breaking into the acting world and it looks like she’s here to stay. However, she doesn’t plan on riding her famous father’s coattails. Instead, Iris is working on carving out a path for herself and she’s looking forward to seeing what the future holds. Although she only has one acting credit at the moment, she is set to be in an upcoming mini-series called Pistol. You may not know much about her now, but this is the perfect time to learn more. Keep reading to learn 10 things you didn’t know about Iris Law.

Iris is on the verge of finding success as an actress, but this isn’t her first time being in the spotlight. She has been a model for several years and she’s gotten some very impressive opportunities with major brands. As of now, it looks like she plans to continue modeling while also pursuing acting.

2. She Hopes To Inspire Other Women

Iris plans to make good use of the platform she’s building, and she wants to use it as a way to inspire others. During an interview L’Officiel, “I hope to be a positive role model to women. Being a woman is such a beautiful thing and embracing and allowing yourself to feel sexy is also an important part of that.”

3. Shaving Her Head Changed Her Life

If you’ve been following Iris for a while, you probably know that she used to have long brown hair. That isn’t the case anymore, though. She is now rocking a sporty blonde buzz cut, and she says that making the change is one of the best decisions she’s ever made. She told Vogue, “I wanted to do something that felt liberating. The day I shaved my head, I changed my life. I’ve never done anything like that before.”

4. She Is Surprised By Her Success

There are lots of people out there who would probably agree that Iris was destined to be a star, but she was actually surprised by the fact that she found so much. While talking to Interview Magazine, she said that the things she accomplished came as a “shock” to her.

5. She Is A Big Believer In The Importance Of Gratitude

Since Iris has led a very privileged life, it can be easy for people to think that she takes everything she has for granted. That couldn’t be further from the truth, though, She understands the importance of gratitude and it’s something she likes to stay mindful of.

6. Her Brother Is An Actor

Iris isn’t the only one of Jude Law’s children who has decided to follow in his footsteps. She has a brother named Rafferty who is also an actor. He hasn’t had any major roles as of yet, but he is currently working on a mini-series called Masters of the Air. It’s unclear when the project will be released. Maybe one day the two will get the chance to work together.

Iris’ schedule can get pretty busy, but she still likes to find time to do other things she enjoys. When she gets some time to herself, she loves cooking. Preparing meals is another great way for her to express her creativity and she looks forward to trying different recipes.

8. Her Dad Gives Her Acting Tips

Even though Iris is committed to building a career based on her own talent, she also understands the importance of working smarter not harder. Her dad has been a great resource for her, and she is thankful for his guidance. Iris told Standard, “I tape [auditions] with my dad. He gives me great tips.”

9. She May Have A Boyfriend

In general, Iris already appears to be the kind of person who likes to keep her personal life low-key. However, her interview with Vogue mentioned that she has a boyfriend named Jyrrel Roberts who is also a model. However, it’s unclear whether the couple is still together.

Like many other talented people, Iris was inspired by many of the greats who came before her. In her interview with L’Officiel, she shared that Grace Jones is one of her inspirations. She added, ” I’ve seen some amazing photos of Grace wearing La Perla in the ’80s and she just oozes confidence and empowered femininity.”