Home
Television
Being Human
Being Human 4.13 Review: “There Goes The Neighborhood Part III” 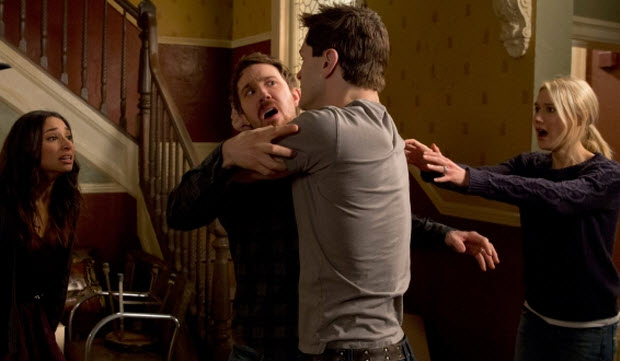 Saying goodbye isn’t easy, especially on Being Human. “There Goes The Neighborhood Part III” was hell bent on making that clear.

I’ve grappled with how to write this final review for a show that I’ve been with for four years, a show that’s truly been very close to my heart. We watch television for different reasons but mainly to escape… and connect. We see ourselves in these characters. They say things we cannot, sometimes do the things we have. The connection is perhaps not always literal or direct, but through them we live, grow and learn.

Being Human came into my life at a weird time. I was just beginning to experience my adulthood and independence. To be in reach of my aspirations. But after a sudden turn of events and a psychological diagnosis I felt like I had lost it all. As if I had literally been split in two. There was the person that I knew and was. Then there was the person that I had become. I feared this new person and as a result (I thought I) couldn’t control them. The prognosis left me with the reality that everyday for the rest of my life I was going to have to fight to not be this version of myself.

To avoid losing control or doing things I’d ultimately regret, I was going to have to be brutally honest with myself. At all times. It’s something many spend their entire lives failing to do — avoiding. I didn’t have that luxury. Lying to myself could cost me more than just my my conscious. I had to change the way I lived, move into this weird “safe mode” so that other part of me wouldn’t break the surface. There is no cure, but “management” is key they say. That’s the kicker though. Even when I knew what I had to do I also knew that I wasn’t always going to do it. There would be times when I slipped, a chance for everything I was afraid of to happen.

This is an experience I shared with the roommates of that Boston brownstone. I might not have killed anyone, but even with the greatest intentions my mistakes still certainly hurt people, especially those I cared about. At a time where I was just beginning to know who I was (and when I also refused to accept the entire reality of that), these characters were here. Their stories, desires and struggles resonated with me deeply. I felt like I wasn’t alone.

I believe that Being Human spent four years showing us the worst parts of ourselves, and in a finale that could have easily been an emotional and physical massacre the series chose to close out on a complete examination of the human experience. It decided to give its characters and viewers one of life’s most basic, beautiful, and hopeful lessons. As a well known sci-fi podcast once touched on, each decision we make is like a drop of wax. It’s something that can be molded however we desire.

Our ultimate choice makes it solid, concrete, unchanging. Sometimes after we’ve made that choice we realize it wasn’t the one we wanted. We realize we’ve made a mistake, but that’s the thing with decisions and time. Once they are made they can’t be changed. So some of us spend our lives regretting all those choices we made, living in the past but never moving forward. Ruminating on what could have been.

This makes us forget one very vital thing: this moment now is too a drop of wax. Every minute we spend beating ourselves up over something we cannot change we avoid changing what we can. We miss being the person that we want to be. “There Goes The Neighborhood Part III” saw Sally, Josh, Nora, and Aidan realizing this very thing. They didn’t have to be defined by all those drops of wax that had come before. Yes, they were solid, but this moment wasn’t. Here and now we can decide what comes next.

Within the first ten minutes we watched Sally sacrifice herself to save her friends, their lives and consciences. What we thought was her demise was actually her reward. Sally giving her life to destroy the compulsion Aidan was under was her last bit of unresolved business. In this moment she chose not to be defined by her past, but by her love for her friends, her appreciation for life, and by her final decision on this plane. Ramona has a fit about this, but Josh, Nora and Aidan manage to make it out.

With that our favorite werewolf couple have to decide what their future is going to be. They slowly work their way back into a normal human rhythm and grapple with the reality of a family. Being out of control and allowing our fear to run us isn’t an option with a baby. Josh and Nora must accept who he is, what they are, and realize that not taking chances or not going for it does not protect us from slip ups. There will always be chances to make mistakes whether we hide away or not. Accepting who we are makes it so some outside force can’t run us. We aren’t at the mercy of the universe. We are at the wheel at every turn. We decide what happens next.

With Sally’s sacrifice Aidan gets a true second chance. He is once again human, can taste food and get hypothermia. However, the two most human parts about him even when he was a 200 year old vampire (the guilt and fear of death) don’t leave with his literal monster. We know that what Sally gave him was a gift, but we see that there’s also a balance to the universe. Aidan’s two decades of living catch up to him. Suddenly he only has a week left to live.

Like the other characters Aidan had pure shining moments throughout the series, but he was also perhaps the most infuriating in his falls. The finale was his true pinnacle when we see him willing to give up the humanity Sally offered because his guilt and fears overtake him. The thought was blood pressure elevating, but in his moment of breakdown we see how the weight of what we’ve done can bring us down. How we can be our own demise if we allow it.

Josh is there to pull him out while Ramona is there to remind him of some unfinished business. After another death in the house, Aidan and Josh agree to handle Ramona once and for all. But Aidan pulls a “A Funny Thing Happened On The Way To Me Killing You” move, taking on Ramona single-handedly. This is his moment of reckoning. Just when Ramona thinks she’s got the upper hand — pushing Aidan down the stairs and leaving his body to lay in Sally’s former death spot — he gives his life to end the cycle of hurt. By stopping Ramona he resets his own cycle of death and pain.

When Josh and Nora arrive at the house they are greeted by its chard ruins and a ghostly Aidan. Here and now everyone is ready to move on, but for Aidan moving on means his door. As he says goodbye and walks through we see the girl with the heart of gold again. Sally is waiting for him on the other side. The series ends with Josh and Nora visiting their former roommates in a heaven of sorts. In this way and in these moments they are together. In the series last images, we see Josh and Nora now have two children, who they’ve named after their friends.

Being Human ended its run on a heartrendingly beautiful note. Through four seasons we watched the ins and outs of what it means to actually be human. Life is just as much about the people that we meet, the places we build, and the ways we grow as it is about our stumbling. The good and the bad work in tandem, not against each other. They remind us why we fight, why we endure. With a finale that could have gone — and be received — in a number of ways, I’m glad that this is how the series will be remembered. I’m glad to have gone on this healing journey with them.