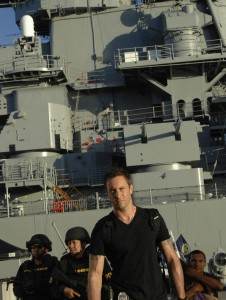 Well, this episode of Hawaii Five-O will certainly change the way I look at any future games of Battleship.

First off, it was great to see a tribute to James MacArthur at the top of the show. I was a great fan of his original Danny Williams and had been hoping he’d guest on this version to match wits with Scott Caan. I’m glad to see this series acknowledge his passing.

This week, McGarrett and Five-O are called in to handle a standoff with a Navy SEAL named Graham Wilson (Law & Order: SVU‘s Adam Beach). He’s been accused of his wife’s murder, who’s taken hostages aboard a battleship and is now demanding someone finds the right killer in four hours. Since Steve is himself a former SEAL, it’s no surprise that the Governor’s new safety liaison Laura Hills (X2‘s Kelly Hu) wants them for the job. This also provides an excuse for Alex O’Loughlin to take his shirt off, and for Grace Park to take potshots at how female LEO’s always end up dealing with the women and children involved. I can hear the fangirls giggling regarding the former, but the latter is a refreshing critique of a cliche.

While Steve gets himself on the battleship and tries to keep the situation from escalating, it’s up to the rest of the team to close the case. Danny and Chin Ho visit the family home turned crime scene, where they uncover a Russian manuscript and a key to a safe deposit box, not to mention that the medicine cabinet has an anti-psychotic in it. Graham had been diagnosed with PTSD, and Chin Ho broaches the possibility that he could have killed his wife without knowing it. It poses an interesting question: is the show going to play out the standard “wrongly accused” plotline, or is it going to end up being an episode about one man facing his own demons?

It’s a missed opportunity when the show chooses the former, and names Mrs. Wilson’s Russian first husband as the culprit. Not that the episode’s resolution – with the team racing to track down the Russian before he can flee the country with his biological daughter, not to mention before Steve is executed – isn’t interesting to watch, but I can’t help but think it would have been more crafty and certainly unique if they’d spent the hour trying to help Graham come to terms with himself. It’s hinted at in a moment within the last few minutes, but it would have been a pretty interesting episode had the show gone the more complex route.

The episode raises the stakes about halfway through, when Graham barricades Steve in the bathroom and moves the hostages. Not the typical way that you’d expect a situation like this to play out. Unlike last week’s Chase, he’s able to let his team do the work and help them out, rather than still being the man who has all the answers. Even though he’s soon freed by a helping hand (courtesy of Robert Loggia), he doesn’t have to be in control.

There are some minor eye-rolling moments in the episode (Steve states the obvious when he says “The longer this goes on, the worse it’s gonna get” and Kono makes a rookie mistake in turning her back on Wilson’s daughter, which leads to her kidnapping) but they’re forgiveable given that Hawaii Five-O isn’t prone to them like some other series in its genre can be. (Although the local news in my area probably didn’t get the irony of leading out of the show with a story about a man who murdered his wife and child.)

As a whole, this is an episode that’s a decent watch, even if it does paint by numbers a little bit. After all, there’s something to be said for the comfort of familiar territory, just as long as it doesn’t get too familiar. Considering next week is going to be a showcase for Scott Caan, which means it’s going to be a worthwhile watch for his acting alone, I’ll cut this one some slack.