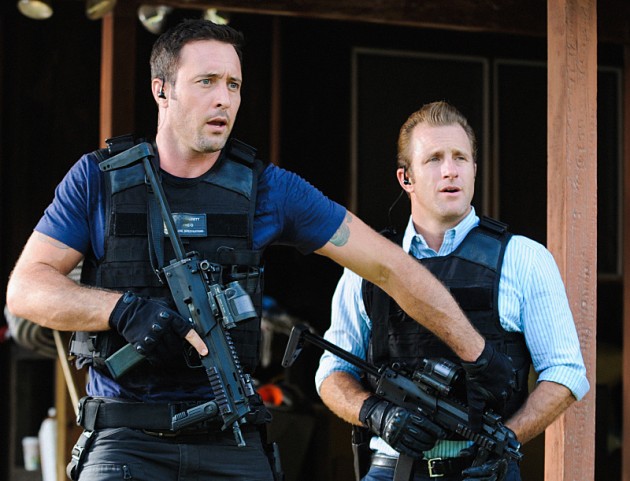 With the 2014-15 TV season having come to a close, TVOvermind is taking a closer look and reviewing the most recent seasons of some of network TV’s biggest shows. We last examined NBC’s “Chicago Fire.” Next up: CBS’ “Hawaii Five-0.”

Last week the cast and crew of Hawaii Five-0 gathered for their annual, traditional blessing ceremony before the start of a new season. It was a tumultuous fifth season of Hawaii Five-0, one, which saw the death of one villain, the forging of another, and the 5-0 team come together in strong form under pressure. Let’s reflect on the highs and lows of Season 5 as we look ahead to Season 6.

The team has expanded wonderfully in the past five years since Steve, Danny, Chin, and Kono first came together. However, this is no reason for there to be two separate cases every week which keeps the team splintered for every episode. I let it go the first couple of times, but the more it happened, the more frustrated I became. Splintering the team like that so often takes away from its core belief, Ohana. It also felt very awkward when the team needed to come back together quickly after spending the majority of an episode, or episodes, apart. This team is family, they should at least check in with each other more often. It’s hard for me to admit that this gigantic problem kept me from investing wholeheartedly in Season 5.

Additionally, and although I understand the lure of the gimmick, guest stars need to have a purpose. Big names have made the flight to Hawaii to spend some time, in or out of those handcuffs, with 5-0. An amped-up episode with a notable guest star should pack a strong punch, not a lukewarm one. Case in point, Michael Imperioli is a brilliant actor with a long range of talent. His stint as Steve McGarrett’s barber/partner was a strong performance, but not necessarily the strongest story. If you’re going to ask someone to make the trip to paradise to film, the storyline should at least have a stronger impact, and leave a more lasting impression.

There is no better “writing gold” than taking a plot point from seasons past and have it pay off in a huge present storyline. Danny’s had rough years before, but I’d have to say this was a particularly brutal one. Danny’s brother was first, and last, seen in Season 1 fleeing the country and the government when his embezzlement scheme was brought to light. Danny’s brother never even made an on-screen appearance this year, but his troubles with the government and a South American criminal were the catalysts for shocking events this season. The death of his brother pushed Danny over the edge in one of the most desperate displays of grief I have ever seen. His brother was murdered and in a subsequent rage Danny committed cold-blooded murder himself. It was calculated revenge motivated by grief, and it’s a line I don’t think Danny ever thought he would cross.

Months later he was arrested for that murder, locked up and beaten in a South American prison, and even after he was rescued and still trying to come to terms with everything that had happened, he was then stabbed by his girlfriend’s ex. Yet still, after all of that, Danny had the girl, his daughter, and his team. Then in the season finale, he got hit with the whammy that his ex-wife had lied about her son being his as well. I’ll save my personal tirade about that because storyline-wise, this was also a golden move on the writers’ part for next Season.

Heartache and terror were not the themes for Kono this season. Despite points of stress, the year was pretty wonderful to her. She got to show off her best self-defense skills in one of the strongest episodes of the season, fought the elements in a valiant journey in her mother’s honor, and finally said “I Do” to the man she loved. A good year indeed!

Other highlights included the character-centric episodes, specifically the ones for Danny, Kono, and Grover. Sprinkling these in every once in awhile only further solidifies fan dedication.

What Needs to Happen Next Season:

The 100th episode of Hawaii Five-0 was neither the best, nor the worst. The “What If” concept was a nice touch, and it’s true that the team might have went on to have good lives if 5-0 never existed; but then, 5-0 would never have existed, and that probably would have opened up a whole other can of worms in the “What If” world. Mercifully, Wo Fat’s storyline was finally put to an end. It was overdue since Steve had already figured out most of the history between himself, Wo Fat, and Doris McGarrett. This was immediately followed by the brilliant move to create a whole new antagonist for 5-0 to tackle.

Chin’s brother-in-law Gabriel could have been a notable guest star for one or two episodes to shed more light on Chin’s past. Instead he was kept around and built up to be an upcoming antagonist not only for Chin, but for all of 5-0. Christopher Sean is a brilliant actor and he has built himself up to be a masterful villain, and a worthy adversary for 5-0. Here’s hoping he gets enough time off from Days of our Lives to make regular trips to Oahu.

Hawaii Five-0 has brought in a slew of notable guest stars over the years, and this year it wouldn’t be an exaggeration to say they brought in an overhaul. It is a mistake, however, to bring in guest stars without a purpose, a clear storyline which makes their presence not only notable, but lasting. I am all for Carol Burnett, Frankie Valli, Michael Imperioli, and even Xzibit making return appearances. Their performances were strong, and it just feels like there’s more story to tell with each of them.

We can’t talk about what should happen to 5-0 next season without touching on their fearless leader. McGarrett deserved a bit of a breather on the personal front after letting go of Catherine at the end of Season 4. He even got closure by ending his battle with Wo Fat once and for all. Being that his mother is a spy with whom he has an endless amount of issues, Steve’s life will never be simple. However, like his partner, Steve deserves some sort of stability. Whether or not that is with Catherine is still up in the air, but I have a different idea in mind regardless. “Uncle” Steve, as Grace affectionately calls him, took on looking after another youth, Nahele, after the young man stole his car. I wouldn’t mind seeing Steve’s friendship with this kid develop, and maybe even plant the seed for Steve to become a foster parent.

I’m also throwing out the suggestion that we should see Jerry’s vocals make more frequent appearances, because the man can sing!