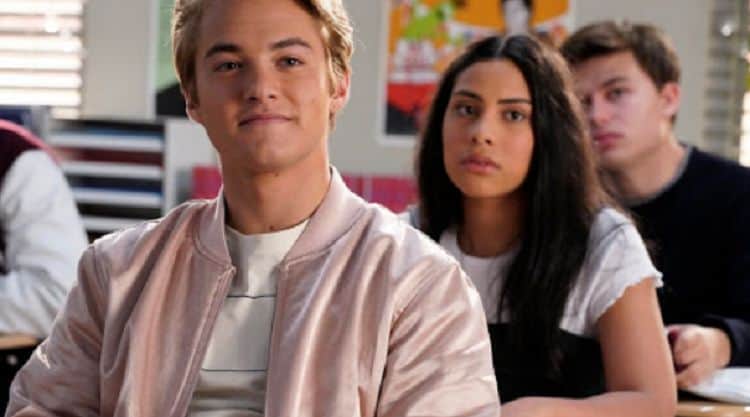 If you aren’t familiar with the name Haskiri Velazquez yet, you will be very soon. The talented up and coming artist has been in the industry for nearly a decade and she’s blazed quite the impressive trail for herself. Her resume features a dozen credits including film and TV roles. Now she’s finally gotten the chance to share her talents with a wide audience thanks to her role in the Saved by the Bell reboot. Daisy, her character in the show, is an outspoken high school student who is sure to shake things up. In addition to the series, she also had a role in the 2020 film What Lies Below. Continue reading for 10 things you didn’t know about Haskiri Velazquez.

Unlike the characters in Saved by the Bell, Haskiri isn’t from the west coast. She was born and raised in New York City in Manhattan’s Dyckman neighborhood.  She is a proud member of the Latino community and has roots in both the Dominican Republic and Puerto Rico.

2. She Always Wanted To Act

From an early age it was clear that Haskiri was destined to entertain. During an interview with Just Jared Jr. Haskiri said, “For as long as I can remember I’ve always put on shows for my family & friends, entertaining people around me was something I always loved to do. ” Haskiri got her start in theater through a New York City based non profit called Urban Arts Partnership.

Everybody has at least one guilty pleasure when it comes to food, and Haskiri’s is ice cream. She absolutely loves eating ice cream and chocolate chip cookie dough is one of her favorite flavors. There’s a very good chance she celebrated with some ice cream once she found out she was cast as Daisy.

Professional acting jobs aren’t the only time Haskiri gets in front of the camera. She and and her boyfriend started a YouTube channel together in 2016 and they upload a variety of different kinds of videos. Their channel currently has more than 132,000 total views.

Haskiri may not have any children, but that doesn’t mean she isn’t still a mother in her own right. She is a very proud pet parent and she has two adorable fur babies: Milo and Blu. As you can probably already guess, the dogs have their own Instagram account.

6. J. Lo Is One Of Her Biggest Inspirations

Representation is very important, but unfortunately not everyone gets the chance to see people who look like them in important positions. Haskiri told Entertainment Weekly, “When I turned on the TV, the only person I saw that I could relate to was Jennifer Lopez. I really clung to her for inspiration, to the point that my family called me Baby JLo.” Now that she has started her own career, Haskiri hopes to provide representation for the younger generation of Latinos.

7. She Wants To Be On Jimmy Kimmel Live!

Haskiri is grateful for all of the things she’s accomplished this year, but there’s still one more thing she’d like to add to her list. She is a big believer in the power of manifestation and in a recent tweet she shared that she is manifesting the opportunity to appear on Jimmy Kimmel Live!

Regular exercise has proven to have numerous mental and physical health benefits. Even though Haskiri’s schedule is busy, she loves to workout on a regular basis. One of her favorite ways to stay in shape is to do boxing training. Thanks to her workout routine, she can enjoy her ice cream without guilt.

Hasikiri may be playing a high school student on Saved by The Bell, but her high school days in real life are a thing of the past. Like many of the other cast members on the show, Haskiri isn’t actually a teenager. She’s actually in her mid 20s. She was actually born two years after Saved by the Bell aired its final episode.

10. She Can Relate To Her Character In Saved By The Bell

Getting the chance to play Daisy was an extra special experience for Haskiri because she and the character have so much in common. During an interview with Give Me My Remote TV, Haskiri revealed that she and Daisy share a lot of similarities such as being ambitious and strong willed. It was these qualities that really drew Haskiri to the role.