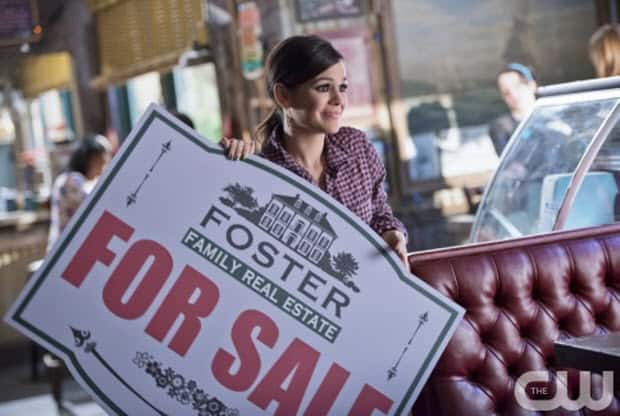 We’ve seen lots of breakups on Hart of Dixie this season so far.  One couldn’t have happened fast enough (George and Lynly), another was devastating even to viewers (Lavon and Annabeth), and the latest (Zoe and Joel) is complicated to say the least.  When Joel was introduced as a serious boyfriend for Zoe this year, we were all so fast to hate him because Zoe belongs with Wade, right?  The writers did a fantastic job with making Joel an all-around lovable guy and now even I am surprised to admit that I’m sad to see him gone.
Convinced that she’s cursed, Zoe ropes Lavon into a crazy scheme to get George and Lemon back together after she visits a psychic who tells her that her bad luck dates back to a wedding that didn’t go through because the groom left the bride at the altar.  Because of Lavon’s affair with Lemon and Zoe’s flirtation with George back in season 1, Zoe believes that all 4 of them have been cursed in love ever since then.  As you’d expect, hilarity ensues as Zoe goes so far as to send them both flowers and a dinner invitation from the other.
George and Lemon had been avoiding each other after they woke up in bed together, but they eventually catch on to Zoe’s plan to reunite them.  They both agree that their one night together, as memorable as it was, was actually a mistake.  At least it seems Lemon feels that way, but George might not be so quick to forget about Lemon just yet.
After her failure to correct the universe in the hopes of turning her own bad luck around, Zoe finally comes to a disturbing revelation that she’s the only one to blame for her and Joel’s breakup.  She’s finally honest with herself and shares a heart to heart with Lavon.  At least these 2 have each other to commiserate over their recent heartbreaks.
Wade found himself caught up in some drama of his own regarding his relationship with Vivian and her son Harley.  Harley’s finally warming up to Wade when he asks him for advice on dealing with a bully at school.  Harley takes his words literally but ends up with a black eye when he stands up to the kid who was “borrowing” his lunch money.  This all leads to a terrible first impression of Wade on Harley’s father, Charles.  The two men are at odds with each other when they’re both at a Wilkes family party the next day.
Ultimately, Charles is a good guy.  He’s only so tough on Wade because he understandably doesn’t like that his son has a new man in his life that he’d prefer to go to for advice instead of himself.  Wade admits that he even feels so guilty that the first time Harley opens up to him, he ends up getting hurt.
This is probably good news for fans of Wade and Vivian, but for the die-hard Zoe/Wade shippers, not so much.  Wade’s maturing so much this season, and now he even got the ex-husband’s approval in a way, so things are looking pretty good on that relationship front.
The cutest storyline of the night belongs to Barry Watson’s character Davis Polk.  He’s been going to the doctor’s office multiple times over the course of the last month, which has been driving Annabeth crazy.  She knows there’s nothing wrong with him, other than he’s a hypochondriac of some sort.  It turns out that he’s only been going there so often to see her and to ask her out,but he’s too shy to ever actually get the words out.  As I predicted, he was the “knight in shining armor” who bought AB a drink at the Rennaissance Faire.  She’s a little shaken when he finally tells her this, but Brick pushes her to give him a chance.
Annabeth accepts a date with Davis to a black tie affair for his uncle who just so happens to be Mayor Gainey of Fillmore.  The irony isn’t lost on her, as Fillmore is Bluebell (and Lavon)’s rival.  As adorable as Davis’ crush on Annabeth is, I think they’re almost too similar, but only time will tell where this budding relationship will go.
Next week it looks like Rob Buckley’s character Peter is back in town for Lemon!  I can’t wait!  He’s been the best match for Lemon out of everyone she’s ever dated through the years.  Unfortunately for HOD fans though, Rob Buckley’s been tapped to co-star in a new CW series for the fall so he probably won’t be around for too long.
[Photo via Eddy Chen/The CW — © 2014 The CW Network, LLC. All rights reserved.
Prev Article Next Article